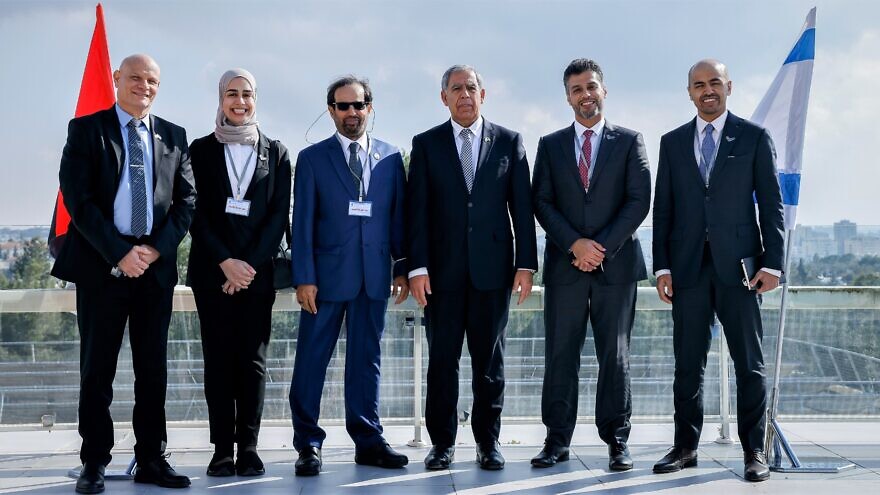 Ali Rashid al-Nuaimi (third from left), chairman of the Defense, Interior and Foreign Affairs Committee in the United Arab Emirates; Chairman of the Israeli parliament Mickey Levy (third from right); and a delegation of members of the United Arab Emirates parliament at the Knesset in Jerusalem on Feb. 7, 2022. Photo by Olivier Fitoussi/Flash90.
Republish this article
812 WORDS
Spread the word.
Help JNS grow!
Share now:

(June 3, 2022 / JNS) It was the fastest free-trade agreement negotiated in Israel’s history. Signed on May 31 in Dubai between Israel and the United Arab Emirates, it comes only two years after they signed a historic pact establishing diplomatic relations and is a milestone in Israel’s acceptance into the region.

The agreement will remove tariffs on 96% of goods between the two countries on everything from food to jewelry to medical equipment. Other benefits include protection of intellectual property and, new to free-trade agreements, a promise to find ways for small- and medium-sized businesses to profit from “commercial opportunities granted by the agreement.”

“Where there is a will, there is a way,” Ohad Cohen, head of the Foreign Trade Administration at Israel’s Ministry of Economy, told JNS. “We both realized that we want to do this and that we shouldn’t waste time on needless negotiations.”

“The fact that both governments clearly say doing business with each other is kosher will definitely encourage businesses from both countries,” he continued. “Under the agreement, we’ve set up what we call a joint committee mechanism to solve problems. So if there is an issue, we have a mechanism through which we can discuss it with each other.”

Cohen led the trade negotiations for the Israeli side—something he normally delegates to deputies—but took the reins in order to speed up the process. “I had a very good partner on the other side,” he said, crediting his UAE counterpart, Juma Al Kait, assistant undersecretary of Foreign Trade Affairs at the UAE’s Ministry of Economy.

Since the Abraham Accords, business between the two countries has grown quickly, reaching $885 million in 2021. “We do not publish numbers until we are 100% certain that they are correct. The UAE may have a faster way to evaluate trade, and they said that already in the first months of 2022, the overall trade surpassed $1 billion,” said Cohen.

Diamonds account for more than half of the trade, he noted. 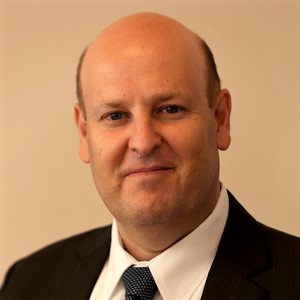 “Trade with the UAE is much larger than with any of our neighbors. The overall bilateral trade between Israel and Egypt is around $330 million a year. With Jordan, we’re talking around $200 million a year,” said Cohen. Israel signed peace agreements with Egypt in 1979 and with Jordan in 1994.

UAE Minister for Foreign Trade Thani bin Ahmed Al Zeyoudi, who attended the signing ceremony in Dubai, said the free-trade deal will “push the value of our non-oil bilateral trade beyond $10 billion within five years.”

“To my understanding, what he meant was that we already passed $1 billion. The direction is positive. Let’s aim high,” said Cohen.

‘The point is, we have neighbors’

There’s direct trade between Israel and the UAE, and then there’s the fact that the UAE acts as an international transit hub for multinational companies, he said.

But the products of those multinationals aren’t covered under the free-trade agreement. In other words, South Korean TVs that pass through the UAE to Israel will not enjoy the zero custom duties that UAE products will under the agreement. However, Israel will become part of the transit hub and use UAE ports, which will open up markets to Israeli goods in places like Africa and India. That’s where the $10 billion comes in, explained Catarivas.

From the UAE’s point of view, “they want to diversify and move away from an oil-based economy to a knowledge-oriented, or science-based, economy,” he said.

He added that the nation looks to Israel as a model of the latter and hopes “it can accelerate and even enhance its economic shift so that it’s more technology-oriented by working with Israel.”

Economic upsides aside, Catarivas noted that the main takeaway is political. “Following the Abraham Accords, Israel is becoming more connected to the region. [Former Prime Minister Ehud] Barak talked about Israel as a ‘villa in the jungle,’ but now we are an apartment in a condominium,” he said. “Maybe it’s a penthouse apartment, but the point is, we have neighbors.”

He continued, saying “we are now connecting ourselves and our economy to the region, and operating as a regional partner. There are things happening with the Egyptians, with the Jordanians and also in Morocco. There’s a change in mindset. We’re looking at our neighbors as eventual economic partners. And I think they’re now starting to look at us not as strangers in the region, but as part of the region, with whom they can work and benefit.”