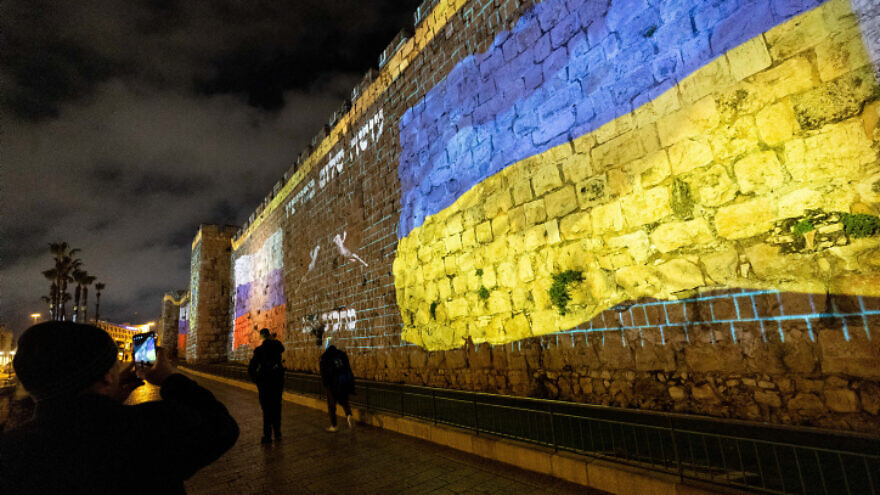 The flags of Ukraine and Russia screened on the walls of Jerusalem's Old City on March 13, 2022. Photo by Yonatan Sindel/Flash90.
Republish this article
1121 WORDS
Spread the word.
Help JNS grow!
Share now:

(March 16, 2022 / JNS) As Russia pushes further into Ukraine and threatens its capital Kyiv—and as Russian President Vladimir Putin appears unfazed and undeterred by Western nations willing to sanction Russia through economic means, but afraid to fight militarily to save innocent Ukrainian civilians—the question arises: What could the world have done to deter Putin? And what does this mean for the State of Israel?

John Hardie, a research analyst at the Foundation for Defense of Democracies, told JNS that the biggest reason Putin has not been deterred “is that he reached a point where he was simply determined to settle the Ukraine issue once and for all.”

“For Putin, securing Ukraine within Russia’s sphere of influence is a long-standing key objective, and he likely worried that Ukraine was slipping away,” said Hardie. “He appears to have grown more fixated on this issue in recent years—perhaps reflecting concern about his legacy and less exposure to/tolerance for dissenting opinions or even objective assessments from advisers.”

He also suggested that Putin may have believed “now would be an opportune time to act,” as he likely assumed that America’s attention was diverted as it focused on China and other issues, and as Germany is dealing with a leadership transition and France heads into an election.

Hardie also said the energy crisis played a part in Putin’s thinking; he may have believed that the costs of invading Ukraine at a later date would be higher, particularly “because Ukrainian missiles and other military capabilities were improving.”

“He almost certainly underestimated the Ukrainian military’s will and ability to resist, the Ukrainian people’s receptivity to Russian forces and the severity of retaliatory Western sanctions,” said Hardie.

In terms of what the West could have done differently, Hardie said he wishes that the United States “could have agreed on these harsher sanctions (especially the central bank sanctions) before Putin invaded and communicated that to Moscow,” adding that while he commends the Western allies for ramping up military aid to Ukraine, “it obviously would have been better if Ukraine had that stuff before the war began. And the U.S. certainly shouldn’t have delayed approval of military aid or canceled military training in Ukraine, as the Biden administration reportedly did.”

“I’m not sure doing those things differently would’ve deterred Putin,” he continued, “but we would’ve stood a better chance. The central bank sanctions would’ve been a particularly important deterrence threat because they basically paralyze Moscow’s ability to use its massive war chest of foreign reserves, which Putin likely expected could help Russia muddle through while under sanctions.

‘He thought he would get away with murder again’

In one worrying development—for Ukrainians, at least—Putin announced that he would allow Syrian fighters to join Russia’s ranks.

According to Jonathan Spyer, a researcher at the Jerusalem Institute for Strategy and Security (JISS), this step may indicate that Putin feels he is “short of reliable manpower or of deep support for the war at home, and therefore wants to make use of non-citizens as cannon fodder for when his forces enter the big cities of eastern Ukraine.”

Spyer said that for Israel, this “underlines the extent to which Russia is a strategic rival to Israel, aligned with Israel’s regional foes.”

Emmanuel Navon, also an analyst with the JISS, told JNS that Putin “is influenced by Alexander Dugin, a nationalist Russian philosopher who calls for the annexation of Belarus and Ukraine to Russia.”

Navon said Putin “has managed to turn Belarus into a vassal state by backing [President Alexander] Lukashenko, who has stolen an election and terrorized Belarussians into submission. Putin had similar plans for Ukraine, but Ukrainian President [Volodymyr] Zelensky is no Lukashenko. So Putin decided to invade Ukraine and submit it into political submission, as Soviet leaders did in the Baltic states in 1939, in Poland in 1945, in Hungary in 1956 and in Czechoslovakia in 1968.”

According to Navon, “since Putin mostly got away with murder in 2014 [when he annexed Crimea], he thought he would get away with murder again. Thankfully, he has been grossly mistaken. His military plans have been stalled by the courageous Ukrainian resistance; his economy is collapsing under the weight of Western sanctions; and his propaganda machine has been defeated by social media. It is unclear whether he’ll back down, try to sustain a long war of attrition or take the risk of a military confrontation with NATO.”

‘Israel must make a choice and take a stance’

While Western nations have so far refused to become directly involved militarily and have opted instead to assist Ukraine from the sidelines, Navon said Europe and the United States “are taking a tough stance.”

“The West could technically go a step further by imposing a no-fly zone in Ukraine, but such a move would make war between the United States and Russia almost inevitable,” he said. “In such a scenario, Putin might decide to use nuclear weapons.”

“In Syria,” he explained, “there was a civil war among many factions, and the West could not support anti-Assad rebels without aiding the Islamists [referring to Syrian President Bashar Assad]. Here, there is a country arbitrarily invading another one to impose a regime of its liking. If the West lets this happen, the order it established after World War Two will collapse. It will be an order—or, rather, a disorder—in which might is right. It was precisely to prevent such a nightmarish world that Britain and France went to war against Nazi Germany in 1939.”

Navon said Israel is learning that it “can no longer sit on the fence as the world is increasingly being divided between democracies and autocracies.”

“As China and Russia want to undo the U.S.-led order, just as Germany and Japan tried to challenge the “Anglo-Saxon order” in the 1930s and ’40s,” Navon said Israel is “understandably wary not to undermine its economic ties with China and its security coordination with Russia [over Syria], but we have reached the tipping point where Israel must make a choice and take a stance.”

Navon noted that Israel faced “a similar situation in 1950 when North Korea invaded South Korea with the support of the Soviet Union.”

Israel’s then-foreign minister, Moshe Sharrett, “wanted Israel to remain non-aligned in the Cold War since both the Soviet Union and the United States had supported Israel’s independence in 1948,” explained Navon. “But Prime Minister [David] Ben-Gurion decided to fully back South Korea and the U.S.-led U.N. coalition at the risk of alienating the Soviet Union. He did so because he understood that a world ruled by brute force and anti-Western autocrats went against Israel’s values and interests alike.”