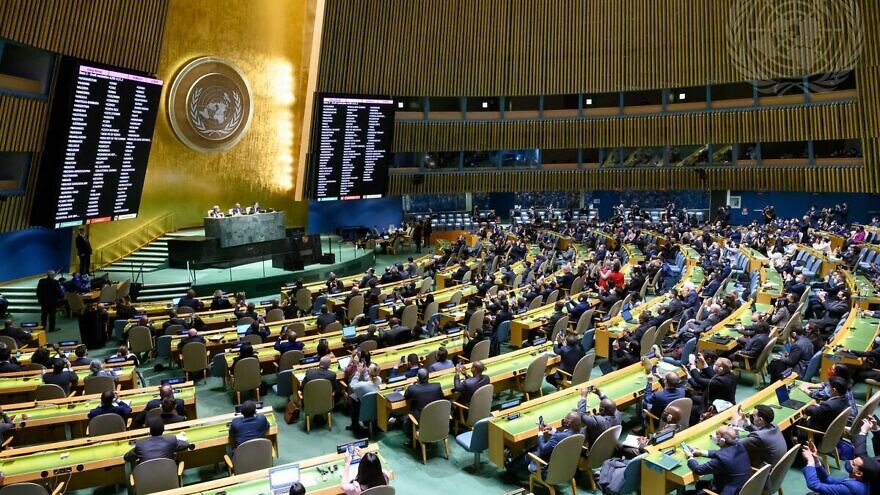 (March 3, 2022 / JNS) Israel and the Middle East have rarely been this united on a vote. Nearly every United States ally in the region fell in line, contributing to an unmistakable message: It’s not just the West, but the world, demanding that Russia halt its invasion of Ukraine.

The United Nations General Assembly, concluding a rare emergency special session on Wednesday, voted overwhelmingly in favor of a resolution condemning Russia for igniting the conflict with Ukraine, and calling for an immediate withdrawal. The final tally was 141-5, with 35 abstentions, surpassing the 2/3 majority needed for passage. An almost comically villainous alignment of Russia, Belarus, Eritrea, Syria and North Korea voted against the measure.

“The message of the General Assembly is loud and clear: End hostilities in Ukraine — now. Silence the guns — now. Open the door to dialogue and diplomacy — now. The territorial integrity and sovereignty of Ukraine must be respected in line with the U.N. Charter. We don’t have a moment to lose,” said United Nations Secretary-General António Guterres in the moments after the vote.

Israel, Kuwait, Qatar and Turkey were among the 96 co-sponsors of the resolution. Jerusalem, has pursued a delicate strategy of siding with its Western allies while avoiding a rift with Moscow. Russian forces control the skies over neighboring Syria, where Israel often carries out strikes against Iran militias and proxies. Israel, to the disappointment and dismay of the U.S. and some European diplomats, elected not to sign on as a co-sponsor of a U.N. Security Council resolution late last week condemning Russia, with the measure destined to fail due to Russia’s veto power at the U.N.’s most powerful body.

Foreign Minister Yair Lapid felt they couldn’t sit out this round, but still sent Deputy Ambassador to the U.N. Noa Furman to the General Assembly podium, rather than Ambassador Gilad Erdan, to deliver a brief, largely measured message. Furman called Russia’s invasion “a serious violation of the international order,” urging Moscow “to heed the calls of the international community to stop the attack and respect the territorial integrity and sovereignty of Ukraine.”

“Given our deep ties with both sides, we are willing to contribute to the diplomatic efforts if so requested, and have been trying to do so in the last couple of weeks,” said Furman, highlighting the 100 tons of humanitarian assistance that Israel has sent to Ukraine. 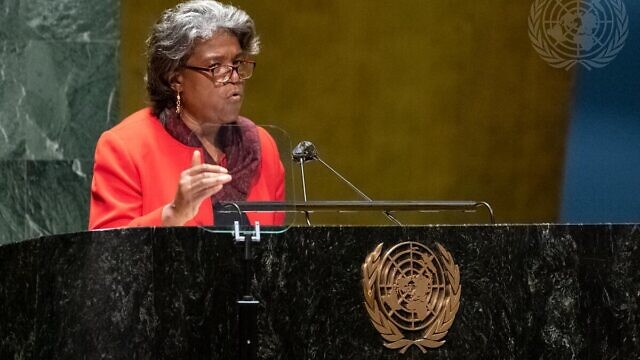 Linda Thomas-Greenfield, Permanent Representative of the United States to the United Nations, addresses the General Assembly plenary meeting on the situation in the temporarily occupied territories of Ukraine. UN Photo/Loey Felipe.

‘A measured and responsible approach’

On the day of the vote, Israeli Prime Minister Naftali Bennett spoke with both Ukrainian President Volodymyr Zelensky and Russian President Vladimir Putin within a few hours of each other. It was his second set of public phone calls with the two leaders since the Russian invasion. The Kremlin said that Putin told Bennett that the key to ending the crisis was an agreement that would protect Russia’s defensive interests.

Earlier, Bennett spoke with Zelensky to discuss “Russian aggression,” the Ukrainian premier wrote on Twitter. Bennett’s office released a brief readout, deeming the phone call a follow-up “to their conversation last Friday, in which they agreed to maintain continuous communication.”

The two talked about Israeli humanitarian aid. Ukraine continues to request military aid from Israel, which has not been granted. Bennett, at Ukraine’s urging, has offered multiple times to mediate talks to end the crisis.

“From the beginning, the State of Israel has taken a measured and responsible approach, which allows us not only to protect our interests but also to be useful. To be a reliable player, one of the few that can communicate directly with both parties, and assist as required,” Bennett said in a Tuesday speech.

Meanwhile, the United Arab Emirates voted in favor of Wednesday’s General Assembly resolution, which is notably non-binding in nature. The UAE has abstained from Security Council action on the conflict. Some have seen its prior inaction to be the product of political horse-trading with Russia, which voted in favor of a Security Council resolution last week extended sanctions on Yemen’s Houthi rebels, who have repeatedly carried out attacks on the UAE in recent months. The resolution labeled the Houthis as a terrorist group.

Others have noted the UAE’s stance to be a display of frustration and anger with the White House to reinstitute the Foreign Terrorist Organization label on the Houthis, which the administration of U.S. President Joe Biden withdrew in its early days, following the application of the designation in the waning days of the presidency of Donald Trump.

Egypt felt pressure from the U.S. and its partners to fall in line, as well. The ambassadors of the G7 (Canada, France, Germany, Italy, Japan, the U.K., U.S., and E.U.) in Cairo released on Monday a joint statement in which they condemned the Russian military’s actions in Ukraine and called on Egypt to vote in favor of the General Assembly resolution, citing Egypt’s vulnerability to a decrease in wheat production as a result of the conflict and the loss of substantial Ukrainian tourism. Egypt has growing military and trade ties with Russia and had previously refrained from condemning the Russian military attack or mentioning Russia by name.

“Egypt voted in favor of the UNGA resolution on Ukraine in line with its firm belief in international law and the principles and purposes of the U.N. Charter. Egypt affirmed the need to focus on finding an urgent political solution to end the current crisis through dialogue and peaceful means,” said a statement from the Egyptian mission to the U.N.

Qatar served as a resolution co-sponsor, urging “all parties to exercise restraint, avoid further escalation, and adhere to peaceful and diplomatic means to settle disputes and differences between Russia and Ukraine,” its U.N. mission said in a statement, creating the kind of equivocation denounced on Wednesday by U.S. Ambassador to the U.N. Linda Thomas-Greenfield.

Turkey, which has at times drawn the ire of NATO allies in its flirtations with Russia, released a relatively scathing statement, calling Russia’s attack a “flagrant violation of Ukraine’s independence, political unity, sovereignty and territorial integrity. Turkey rejects and deplores these unlawful acts that threaten regional and global security.”

Bahrain, Jordan, Lebanon, Oman, Saudi Arabia and Yemen voted for the resolution, as well. The only U.S. ally in the region to abstain was Iraq. Iran also abstained.

While General Assembly resolutions are non-binding, they carry political weight, with Wednesday’s vote representing a symbolic victory for Ukraine and increasing Moscow’s international isolation. Notably, India and China abstained from voting on the measure.