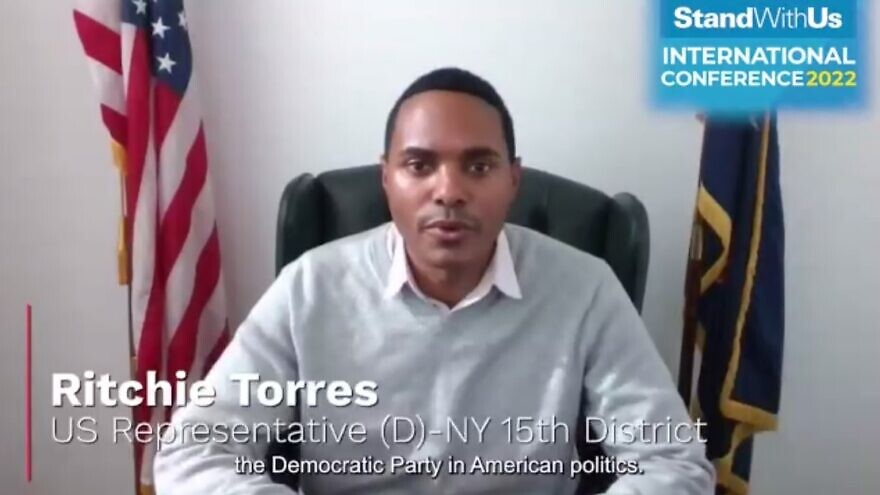 (January 25, 2022 / JNS) After a high-profile debate surrounding the role of anti-Semitism in the Jan. 15 synagogue hostage crisis in Colleyville, Texas, an Israel-education organization’s conference on cultivating greater understanding about anti-Semitism arguably could not have been timelier.

While the special agent in charge of the FBI’s Dallas field office, Matthew DeSarno, raised eyebrows by initially saying the Colleyville attack was “not specifically related to the Jewish community,” FBI director Christopher Wray later described the attack as “an act of terrorism targeting the Jewish community.”

The episode amplified the theme of the StandWithUs International Conference 2022, which was already set to focus on the importance of defining anti-Semitism, and specifically, adopting the International Holocaust Remembrance Alliance (IHRA) working definition of anti-Semitism.

“We cannot hope to defeat it if we cannot define it,” StandWithUs CEO Roz Rothstein told participants of the Jan. 23 virtual conference, sponsored by the Adam and Gila Milstein Family Foundation, which drew more than 200 college students and 200 high school students.

In a pre-conference interview with JNS, Rothstein said the FBI’s initial position on Colleyville “brings up the need for education and information—that every single one of us draws these red lines and has these conversations: ‘Wait a second, it was Jews who were targeted.’ ”

“We have to work hard to make sure people understand that anti-Semitism is anti-Jewish bigotry. We have to know it when we see it. Otherwise, we can’t address it if we have such confusion about what it is,” she said.

One day after the conference, StandWithUs on Monday launched Students 4 IHRA, a campaign to bring about wider adoption of the IHRA definition, which acknowledges that anti-Semitism can include “the targeting of the state of Israel, conceived as a Jewish collectivity.”

“There are people that are anti-Israel that want to separate Israel from the Jewish psyche, and we have to reinforce that Israel is a component of the identity of most Jewish people,” said Rothstein. “Half of the Jewish people in the world are living in Israel.”

Addressing the conference, U.S. Rep. Ritchie Torres (D-N.Y.) spoke of the danger of letting “anti-Semitic poison into the bloodstream” of American political discourse, warning that sentiments on the far-left could devolve into those promoted by former British Labour Party leader Jeremy Corbyn.

“We have to be willing to speak out against the anti-Semitism in our own backyard,” said Torres.

As a pro-Israel progressive, he spoke out against the BDS movement’s efforts to delegitimize Israel and ostracize progressive members of the pro-Israel community. He underscored the need “to drive home the message that there are people like me who are pro-Israel not despite our progressive values, but because of them. … There’s no country [in the Middle East] more protective of minority rights, women’s rights, LGBTQ rights [than Israel] … it’s a tableau of religious pluralism. By every metric, Israel is a profoundly progressive country and enterprise, and that’s a message that needs to be driven home here in American politics.”

Gil Troy, a distinguished scholar in North American history at McGill University and a leading Zionist activist, explained that understanding Judaism is a prerequisite to understanding Zionism. He said Judaism is not just a religion, but a mix of peoplehood and religion involving the Jewish people, the land of Israel and the State of Israel.

Troy said that today, traditional anti-Semitism is “transferred to the Jewish state.”

“Why do we Jews have to say, ‘Oh, my goodness, they [anti-Zionists] might be somehow nice. They’re not!” he said.

‘My business was hating people’

TM Garret, a neo-Nazi turned human-rights activist, provided another perspective on anti-Semitism by telling the story of his “step-by-step radicalization” and subsequent transformation.

“I’m not the usual speaker you would expect for a conference like this,” he acknowledged. “You could say that my business is for the love of people, but it hasn’t always been like that. Until 20 years ago, my business was hating people.”

Growing up in Germany, Garret picked up anti-Semitic jokes and started repeating them as a way to get the attention he was seeking. He later embraced hateful music and skinhead culture; joined the National Democratic Party of Germany (a neo-Nazi party) and the Ku Klux Klan; and read The Protocols of the Elders of Zion, an anti-Semitic propaganda pamphlet based on a hoax.

“It felt like I found the Holy Grail, and I had a chance to protect myself and my people against this enemy, like a superhero,” he said of the Protocols. “And let’s be honest, which kid doesn’t want to be a superhero, saving everyone?” 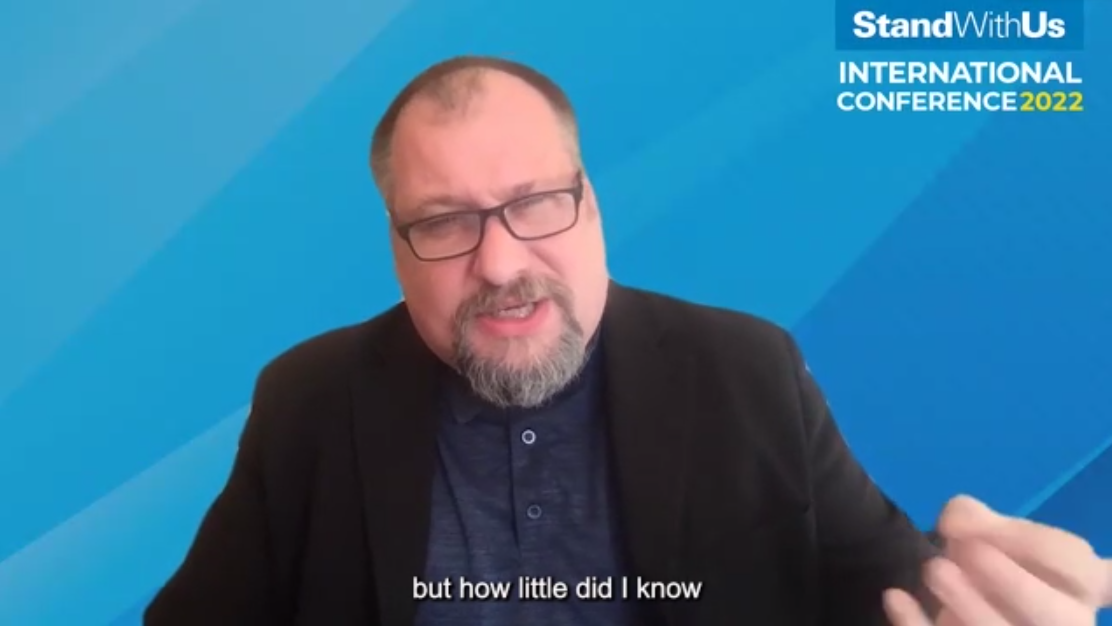 But when Garret experienced kindness first from his Turkish-Muslim landlord, then from the Jewish community in Memphis when he moved there in 2012, he said his “hate started to crumble,” and he gradually abandoned anti-Semitic and racist stereotypes. Today, he is in the process of converting to Judaism.

‘A moral critique of Israeli Jews’

Former Associated Press reporter and editor Matt Friedman provided a wide selection of statistics on the media’s disproportionate focus on the Israeli-Palestinian conflict, including how during his time at the AP from 2006 to 2011, the news agency had more staffers covering Israel and the disputed territories than it had covering the world’s most populous country: China.

He said media outlets will treat the approval of 100 new apartments over the Green Line as a major story, but not 100 rockets fired from the Gaza Strip into Israel because they are trying to align the news with a narrative that always frames Israel as the stronger side.

“What if you zoomed out to the whole Middle East, the regional picture? Then Israel’s actions begin to make sense,” he said, describing such coverage as “an attempt to deliver a moral critique of Israeli Jews.”

Rothstein noted the importance of vigilance in reporting anti-Semitism on social media and the need to hold corporate giants accountable when Jew-hatred goes unchecked on their platforms.

“It’s going to be up to organizations like ours, up to everyday people, up to Congress. It’s dangerous. Are more people learning to hate as a result of an escalation of anti-Semitism on the Internet? The answer is yes,” she told JNS.

In the realm of combating anti-Semitism at colleges and universities, she said the next frontier for Jewish and pro-Israel organizations is working to ensure that campus administrations are implementing safeguards against anti-Semitism and more quickly condemning it when it arises.

“We see anti-Semitism on campus, whether it’s BDS or a social-media post by an anti-Semite who actually sounds dangerous, and we don’t see the kind of response from the administration that needs to happen or would happen if it were any other minority group,” she said. “We want the same level of respect and care and safety for Jewish students and Zionist students on campus.”