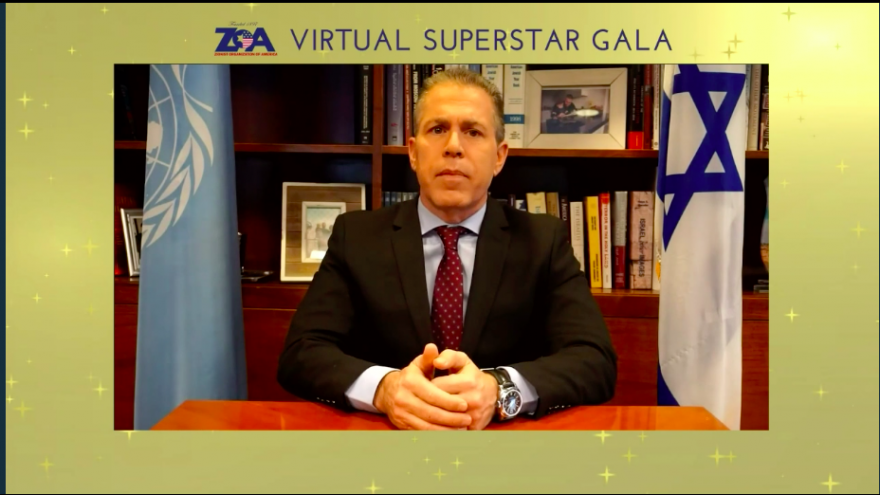 (December 29, 2020 / JNS) Israel’s Ambassador to the United Nations Gilad Erdan reflected on 2020 and how “Israel’s future looks brighter than ever” in his address on Sunday night at the Zionist Organization of America’s Virtual Superstar Gala.

Erdan, also Israel’s incoming ambassador to the United States, received the ZOA’s Woo Kai–Sheng Lifetime Achievement Award for Outstanding Diplomacy. In his acceptance speech, he said that while this past year “supplied a fair amount of hate, it also delivered a fair amount of peace.”

He noted that the signing of the Abraham Accords in September “transformed the region” and has resulted in “a flurry of cooperation on a myriad of levels, but there has also been a shift in the way the [countries] view one another and their place within the region.”

“Together, we have started to build a brighter future,” said Erdan. “For years, the Palestinians held the interests of the Arab world hostage. Arab countries were forbidden from recognizing Israel’s existence or having relations with us unless we surrender to outrageous Palestinian demands. The Abraham Accords shattered that paradigm.”

He added that perhaps Iran should be thanked for inspiring “this newfound bond” between Israel and Arab countries.

“By continuing to spread its dangerous ideology, the ayatollah regime has united the moderate forces in the Middle East. Today, we stand together in confronting the murderous intentions of the world’s No. 1 state sponsor of terrorism. When Israel and Arab countries unite on any issue, then the world should start listening.”

Erdan briefly addressed this year’s deadly coronavirus pandemic, adding that the disease of anti-Semitism reaches much further. “It has existed for as long as the Jewish people has existed, and unless we do more to fight against it, it will stay with us for generations to come,” he said, vowing that fighting anti-Semitism will be among his “top priorities.”

The virtual event featured an array of honorees and speakers, including U.S. Ambassador to Israel David Friedman; author and law professor Alan Dershowitz; rapper and actor Ice Cube, who reiterated his stance against anti-Semitism; and Academy Award-winning actor Jon Voight, who compared U.S. President-elect Joe Biden and leftism to communism and socialism during his speech.

Friedman, upon receiving the Dr. Miriam and Sheldon Adelson Defender of Israel Award, talked about how “it’s just not enough to be pro-Israel. One must be pro-Zionist.” He named U.S. President Donald Trump the “most pro-Zionist president to occupy the Oval Office” and called out the political left for its views on Israel.

“As a Zionist, I’ve always respected and held sacred the right of Israel to decide what’s best for itself. It’s high time for the American left to extend that same courtesy to Israel. Don’t claim to be pro-Israel, you’ve successfully rendered that term all but meaningless. But [be] pro-Zionist. Allow Israel the same rights and self-governance that you would extend to any other nation. Don’t assume that living in America, you’re in a position to know more than Israelis about what’s best for Israel. Here’s a news flash: You don’t.”