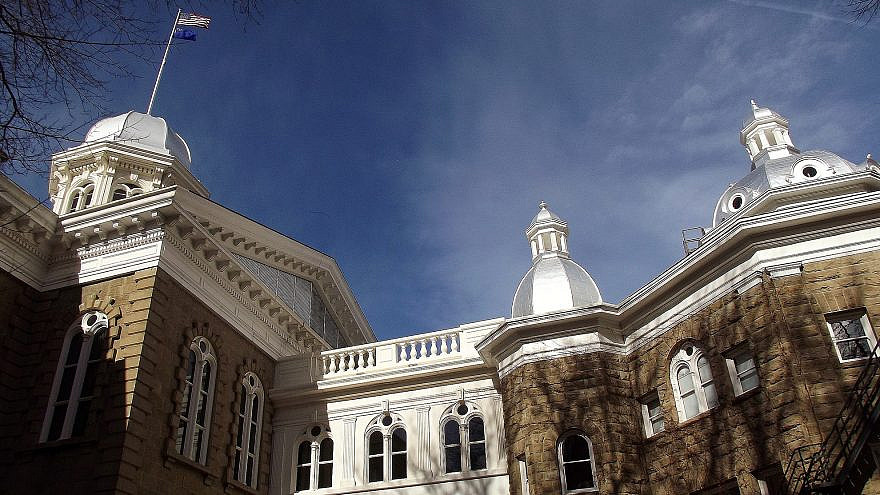 (June 1, 2021, JNS Wire) Carson City, Nevada – A bill strengthening Holocaust and Genocide education in Nevada, which passed out of the state legislature with unanimous support, was signed into law today by Governor Sisolak.

Assembly bill 231 is a bipartisan piece of legislation sponsored by Assemblywomen Lesley Cohen and Lisa Krasner and supported by Lieutenant Governor Kate Marshall.

The bill will establish an educational committee within the Nevada Department of Education to evaluate curriculum standards, inventory classroom materials, and assess instructor training needs. In addition to education relating to the Holocaust, the bill also addresses other genocides such as the Armenian, Cambodian, Darfur, Guatemalan and Rwandan genocides.

A coalition of organizations including ADL Nevada, Israeli-American Civic Action Network – Nevada, Jewish Nevada, and the Armenian National Committee of America, Western Region, advocated in support of the legislation.

“While the nation faces a rising tide of antisemitism, the unanimous bipartisan support this legislation received is a testament to the fact that Holocaust and genocide education must be a priority for all Nevadans,” said Jolie Brislin, ADL’s Nevada Regional Director. “With education comes empathy, understanding, and dialogue essential for the prevention of future atrocities, and ensuring that ‘Never Again’ means never again for everyone.”

“In signing this bill today, Governor Sisolak and Nevada’s legislators spoke with one voice, united in agreement about the importance of Holocaust education, especially at a time when we are facing a historic rise in antisemitism,” said Dillon Hosier, CEO at the Israeli-American Civic Action Network. “And, we’re proud that Nevadans across the state, from a diverse coalition of community organizations, came together to support this vital legislation.”

“Education about the Holocaust is a central pillar of our community’s Jewish identity, and we hope that through this legislation, we will share our stories, our history, with students across Nevada,” said Stefanie Tuzman, President and CEO at Jewish Nevada. “Teaching our community’s history accurately, with respect to the individual experiences of those who survived the Holocaust, is one of our top priorities, and this bill will help Nevada meet that goal.”

The Israeli-American Civic Action Network (ICAN) is a movement of Israeli and American grassroots activists and leaders creating change for a better America, a more secure Israel, and a stronger U.S. – Israel alliance through advocacy education, civic action, and campaigns and elections.

ADL is a leading anti-hate organization. Founded in 1913 in response to an escalating climate of antisemitism and bigotry, its timeless mission is to protect the Jewish people and to secure justice and fair treatment for all. Today, ADL continues to fight all forms of hate with the same vigor and passion. ADL is the first call when acts of antisemitism occur. A global leader in exposing extremism, delivering anti-bias education and fighting hate online, ADL’s ultimate goal is a world in which no group or individual suffers from bias, discrimination or hate.

Jewish Nevada is Nevada’s Jewish Federation, serving as the representative organization for the 70,000 Jews in Nevada. We engage our community to invest, enrich, and ensure the vibrancy and continuity of Jewish life in Nevada, Israel, and around the world. We are the only organization charged with assessing and addressing the needs of the entire community. Jewish Nevada works diligently to build a vibrant community and sustain Jewish life throughout Nevada, Israel, and around the world. We are committed to the values of Tikkun Olam (repairing the world); Tzedakah (righteousness and philanthropy); and G’milut Hasadim (acts of kindness and service).

Republish this article
About The Publishers
Israeli-American Civic Action Network
Jewish Nevada
Publish your organization's press release on JNS Wire
Releases published on the JNS Wire are communicated and paid for by third parties. Jewish News Syndicate, and any of its distribution partners, take zero responsibility for the accuracy of any content published in any press release. All the statements, opinions, figures in text or multimedia including photos or videos included in each release are presented solely by the sponsoring organization, and in no way reflect the views or recommendation of Jewish News Syndicate or any of its partners. If you believe any of the content in a release published on JNS Wire is offensive or abusive, please report a release.