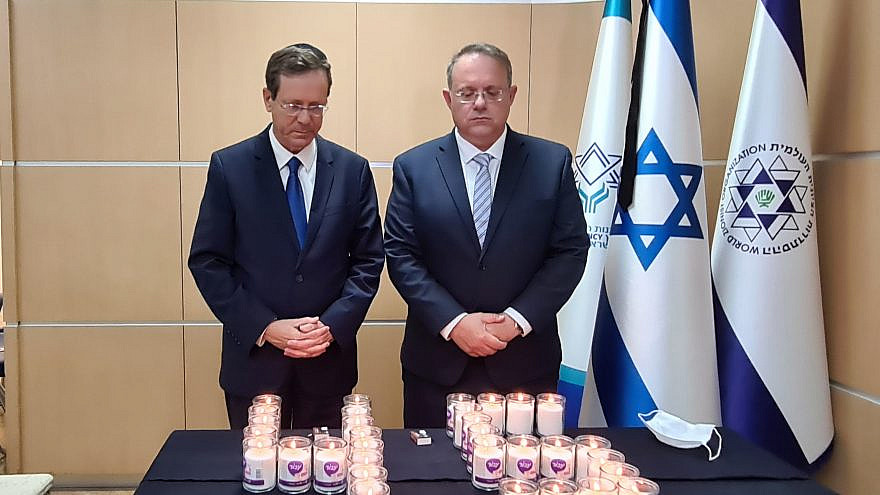 (May 2, 2021, JNS Wire) The Jewish Agency for Israel and the World Zionist Organization (WZO) paid tribute today to those who died while visiting Mt. Meron for Lag B’Omer last Thursday night.

A memorial ceremony took place this morning at The Jewish Agency courtyard in Jerusalem with organizational representatives saying the mourner’s kaddish (the Jewish prayer of mourning) and lighting candles in honor of the 45 victims who perished in the tragic event.

Remarks and prayers were also delivered by Rabbi Noam Koenigsberg of Yeshivat Shaalvim, where 19 year-old Daniel Morris z”l of New Jersey who perished in the tragedy was studying on a Masa program.

Another ceremony will take place Sunday evening at 8:00pm Israel time. The ceremony’s moment of silence, to be conducted along with the organizations’ shlichim (Israeli emissaries), will serve as an act of global solidarity from Jewish communities around the world who are actively seeking ways to commemorate the fallen.

“A devastating tragedy struck us on the eve of the Holy Sabbath. Celebrations at the grave of Rabbi Shimon Bar Yochai suddenly turned into a death trap. This disaster put an end to the lives of 45 men, teens and young children,” said Jewish Agency Chairman of the Executive Isaac Herzog. “The entire Jewish world has come to a standstill. What started as prayers of joy before disaster struck will now become cries of mourning as we grieve the loss of the victims. Tonight, those cries will momentarily transform into a hushed silence when the entire Jewish world collectively takes a moment to contemplate their loss.”

Yaakov Hagoel, Chairman of the Executive of the World Zionist Organization, added, “The tragedy that befell us on Mount Meron impacts each of us. This loss doesn’t differentiate between one’s type of kippah or color of clothes, between the length of the tzitzit or size of the hat. Every year, all of Am Israel arrives at Mount Meron whether they be secular, traditional, national religious, ultra-Orthodox, Ashkenazi or Sephardi. Today is a day of soul searching for our entire nation. We have a collective responsibility to accept, embrace and love each other because we are one people.”

“Israel awoke Friday morning to a horrific reality. The State of Israel and the entire Jewish people are pained by the loss of the 45 victims of this tragedy. We embrace the victims’ families and salute the first responders. When one Jew is harmed, we are all harmed,” added Rebecca Caspi, Senior Vice President for Global Operations of The Jewish Federations of North America.

Republish this article
About The Publishers
The Jewish Agency
Since 1929, The Jewish Agency for Israel has been working to secure a vibrant Jewish future. It was instrumental in founding and building the State of Israel and continues to serve as the main link between the Jewish state and Jewish communities everywhere. This global partnership has enabled it to address the Jewish People’s greatest challenges in every generation. Today, the Jewish Agency connects the global Jewish family, bringing Jews to Israel, and Israel to Jews, by providing meaningful Israel engagement and facilitating Aliyah. It also strives to build a better society in Israel - and beyond - energizing young Israelis and their worldwide peers to rediscover a collective sense of Jewish purpose. The Jewish Agency continues to be the Jewish world’s first responder, prepared to address emergencies in Israel, and to rescue Jews from countries where they are at risk.
Publish your organization's press release on JNS Wire
Releases published on the JNS Wire are communicated and paid for by third parties. Jewish News Syndicate, and any of its distribution partners, take zero responsibility for the accuracy of any content published in any press release. All the statements, opinions, figures in text or multimedia including photos or videos included in each release are presented solely by the sponsoring organization, and in no way reflect the views or recommendation of Jewish News Syndicate or any of its partners. If you believe any of the content in a release published on JNS Wire is offensive or abusive, please report a release.