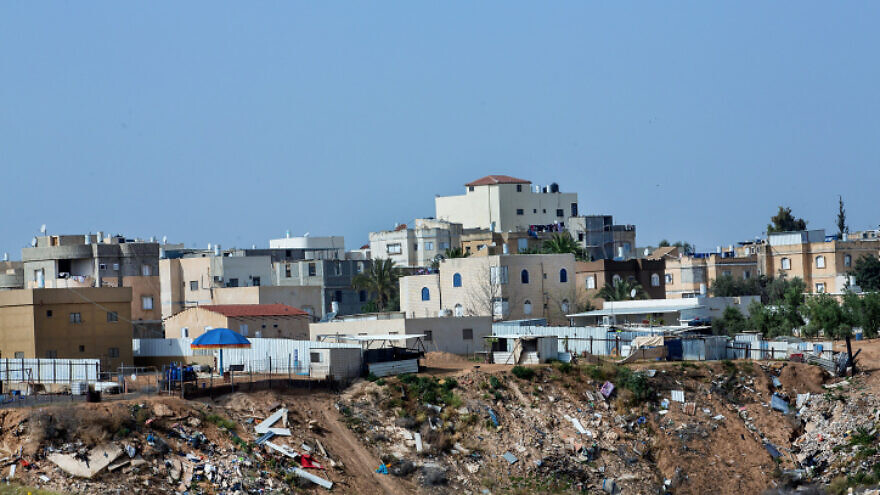 (January 7, 2022 / JNS) Israel’s Sovereignty Movement, headed by Nadia Matar and Yehudit Katzover, organized a tour of the Negev Desert on Dec. 28 for journalists, think-tank professionals and influencers to get a glimpse into the lives of the 300,000 Bedouin who live in that region.

About half of the Negev Bedouin, who constitute 12 percent of Israel’s Arab population, reside in seven authorized cities and 11 villages. The other half live in more than 35 illegal villages with new illegal housing units going up throughout the region on an almost daily basis in areas referred to the pazurah (or “dispersion”).

Speakers on the tour included mayors of both Jewish and Bedouin towns in the Negev, along with representatives of Regavim, a research-based lobbying group dedicated to preserving Israel’s resources and sovereignty.

Outlooks differed in terms of how to build a better future for the residents of the Negev and to deal with the prevalent issues of the day, including rampant illegal construction, widespread lawlessness and violence, drugs and human trafficking, and other challenges. All parties agreed that Israel’s elected officials must do more to combat the erosion of governance in the area.

On a garbage-strewn hilltop near Beersheva overlooking illegal Bedouin construction as far as the eye can see, Meir Deutsch, director-general of Regavim, explained that one of the biggest issues in the area is the fact that the Bedouin have ownership claims on 750,000 dunams of land (some 185,000 acres) in the Negev.

Israeli courts over the years ruled that no land rights were ever acquired in any of those claims, and the lands in question belong to the state.

Nevertheless, Israel still offered those claimants financial compensation along with land swaps—legal housing options within the recognized cities and villages in exchange for their relinquishing claims on state lands both within the established communities and in the illegal areas.

Deutsch explained that based on this arrangement, “every Bedouin over the age of 18 has the right to plots of free land provided by the state” in one of the recognized towns. However, “if someone else [a family from another clan, for example] has an ownership claim over that land, if you try to move onto that property, you might be murdered by a member of the claimant’s family.”

That explains why a town like Lakiya has the infrastructure for 35,000 residents, and yet only 12,000 Bedouin live there since people aren’t willing to risk their lives, preferring to live off the grid. 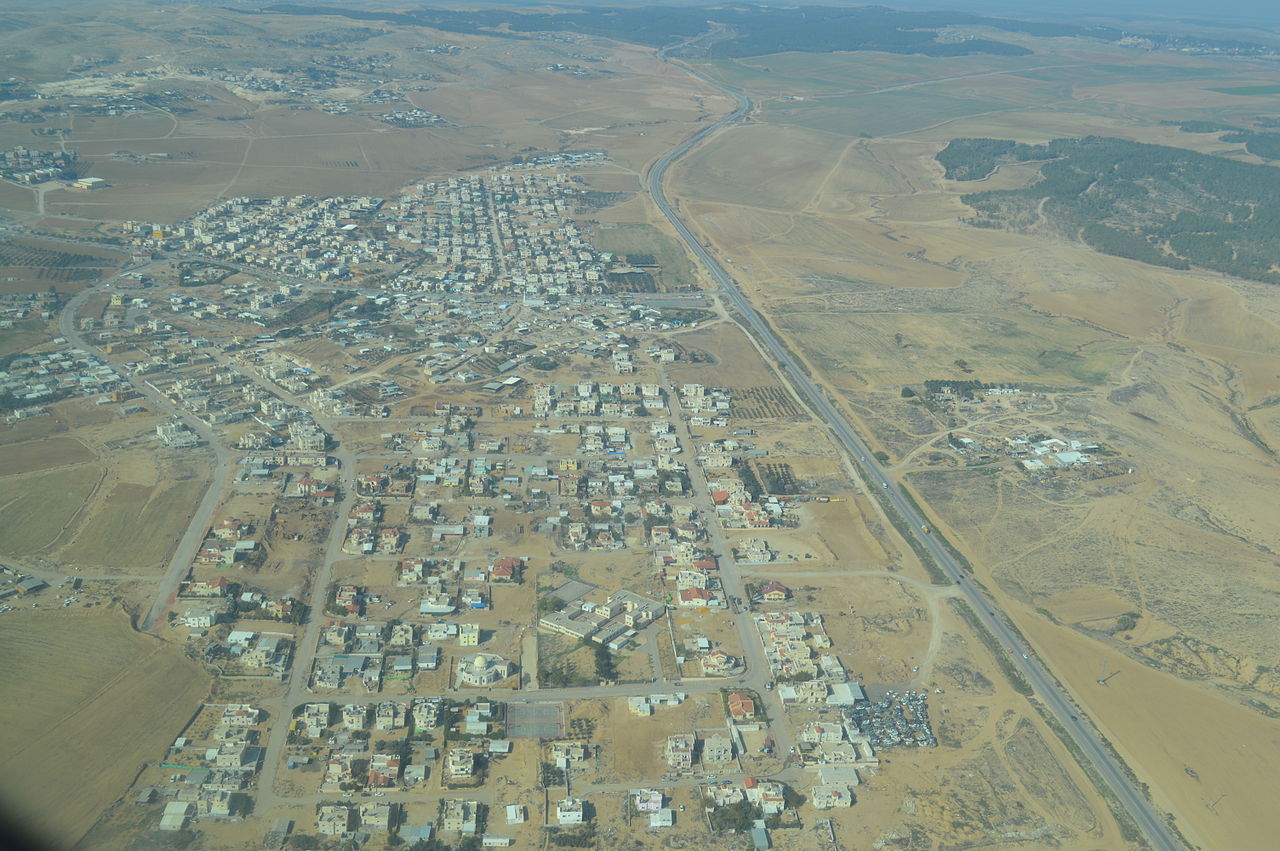 The Bedouin town of Lakiya from the air. Credit: Wikimedia Commons.

Naomi Kahn, director of Regavim’s international division, told JNS that in many cases, those who claim to be landowners accept the state’s compensation package but continue to squat on unrecognized lands while threatening those who would try to move onto land they claim is theirs within the legal communities.

She said “others haven’t accepted compensation or relocation offers because each time they refuse, they get a better offer. That’s called de-incentivizing.”

Regavim would like the government to enforce all dismissed ownership claims to allow individuals who want to live in recognized villages to do so without fear of retribution.

At the same time, the group believes that the state must do more to enhance the quality of life within the recognized communities and meet their needs as citizens of Israel towards a better future.

‘All they want is to get a plot of land’

Lakiya Regional Council Head Achmed Al-Asad offered his views on the situation, explaining that some of the residents of his town have been living in the area since the 1970s but the government has “forgotten about them.”

“There are people living here in substandard conditions. They don’t have running water, electricity or sewage,” he added.

Al-Asad took issue with those who stereotype the Bedouin as all being involved in crime. He said residents “treat you in all of the area hospitals in the south and in the clinics, and HMOs. They work as lawyers. All they want is to get a plot of land in order to build a house legally.”

He also believed that it was the responsibility of the government to intervene and provide his residents with basic services, and find solutions for those within his jurisdiction who don’t have proper housing, as well as for those living in the “dispersion.” He also called on Israel’s police to handle any violence emanating from the area.

Al-Asad invited several members of his town into the meeting who backed his position that it’s the responsibility of the state to find solutions for their needs.

In an effort to improve living conditions for the Bedouin, the Israeli government several weeks ago approved plans for a new Bedouin city and three new Bedouin villages, all of which are intended for resettlement of residents of illegal communities. The idea is to offer a legal, planned alternative in permanent communities. The plan was pushed by Ra’am Party leader Mansour Abbas as part of a campaign promise in Israel’s last election.

Regavim released a statement with cautious optimism in regard to the proposal.

“This new plan, like those that preceded it, is based on carrots and sticks, and the government will have to prove that it intends to see the process through, including the evacuation of the squatters’ camps and the reclamation of the state land they were occupying.”

The statement added: “The government has to shake off the bad habits of its predecessors who simply allotted more and more land for Bedouin settlement—building new communities while allowing the squatters’ camps to stay put. If the government’s plan is implemented in full—both the carrots and the sticks—it will be the first real progress toward a better future for the Negev, and for the return of public land to state control.”

The final speaker on the tour, Pini Badash, the head of Omer Regional Council—a mainly Jewish community just outside of Beersheva—stressed that the area was facing difficult times as a result of a lack of governance.

He blamed social media for having a negative influence over Bedouin youth leading to crime and violence in the area. He also said that the Negev suffered from a lack of law enforcement by the Israeli police, and that Israeli judges living in the south are afraid of retribution; hence, they issue light sentences for those convicted of crimes. Badash claimed that only 5 percent of convicted criminals are actually given jail time.

He also stated that for Israel to reclaim control of the area, there will need to be “a necessary combination of law enforcement, deterrence by punishment and effective policing.”