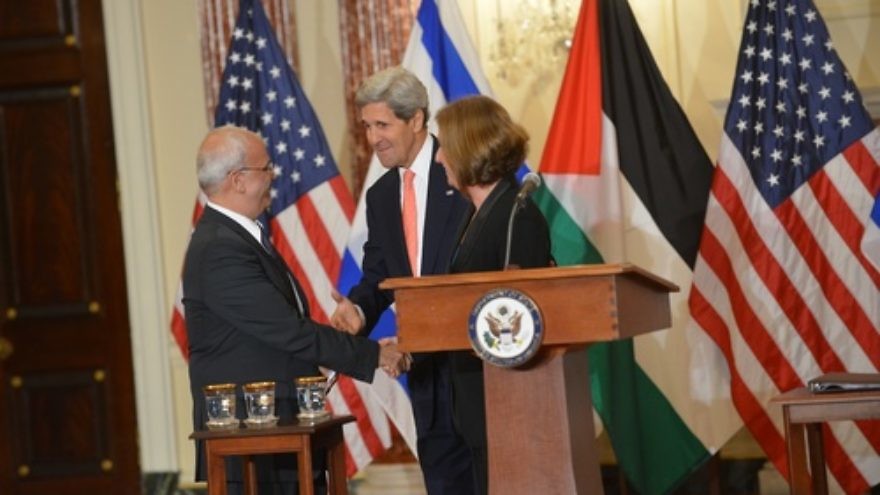 (December 20, 2013 / JNS) As 2013 draws to a close, JNS.org takes a look at the biggest news stories from Israel and the Jewish world that have shaped the outgoing year.

Secretary of State John Kerry has visited Israel and the Palestinian territories nine times since February in an effort to encourage Israeli-Palestinian final status negotiations, which were renewed in July.

As part of the negotiations, Israel agreed to release 104 Palestinian terrorist prisoners, a move that was highly criticized by Israeli politicians, families of terror victims, and other members of the public. To date, 52 of the 104 prisoners have been released. Palestinian Media Watch has revealed that more than 4,000 Palestinian terrorists who spend more than five years in Israeli prisons receive monthly salaries from the Palestinian Authority. Much of the money comes from funds provided by European Union countries such as the UK and Norway.

In March, U.S. President Barack Obama visited Israel in his first trip to the country as president.

In June, Hassan Rouhani was elected Iran’s new president, replacing Mahmoud Ahmadinejad. In September, Obama called Rouhani in the first direct conversation between heads of the two governments since 1979.

In November, the U.S. and other P5+1 powers reached a six-month interim deal with Iran on its nuclear program despite opposition from Israel, Jewish groups, the U.S. Congress, and Saudi Arabia. Under the agreement, Iran promised dilute its 20-percent-enriched (high grade) uranium stockpiles to 5 percent and is allowed to continue production of 3.5-percent enriched uranium while the agreement is in force. The U.S. agreed to provide Iran with sanctions relief that the Obama administration said amounted to $7 billion, but could actually be worth $20 billion, according to a Haaretz report.

The death toll in Syria’s civil war has risen to more than 125,000, according to recent estimates by the Syrian Observatory for Human Rights.

After the U.S. determined that Syrian President Bashar al-Assad’s regime in August used chemical weapons in a Damascus attack that killed more than 1,400 people, the Obama administration lobbied for a military strike on Syria and said it would seek approval from Congress for such action, but ultimately agreed to a surprise Russian-brokered deal for Syria to hand over its chemical weapons to international control. Before the deal was reached, Israelis scrambled to obtain gas masks as a precaution for Syria’s response to a U.S. strike that never materialized.

Amid the ongoing conflict in Syria, hundreds of Syrian refugees have been treated both by IDF medics and at northern Israeli hospitals.

Andrew Driscoll Pochter, a Jewish student at Kenyon College in Gambier, Ohio, was fatally stabbed June 28 in Alexandria during clashes between the Muslim Brotherhood government’s supporters and protesters trying to oust President Mohamed Morsi. On July 3, Morsi was removed from power by the Egyptian military.

Released in October, the Pew Research Center’s “A Portrait of Jewish Americans” survey sparked a heated debate in the Jewish world with its revelations of rising assimilation and intermarriage rates. Pew said intermarriage in the Jewish community has risen to 58 percent from 43 percent in 1990. But support for Israel among American Jews remained steady, with about 70 percent saying they feel either very attached or somewhat attached to Israel, a number Pew said was “essentially unchanged since 2000-2001.” Pew pegged the country’s total Jewish population at 6.7 million, closely corresponding to the estimate of 6.8 million that was simultaneously released by Brandeis University’s Steinhardt Social Research Institute.

In January, Israeli Prime Minister Benjamin Netanyahu was re-elected for a third term. The biggest surprise of the Israeli election was scored by former Israeli television news anchor Yair Lapid’s Yesh Atid party, which placed second in the election by winning 19 Knesset seats.

A political firestorm erupted in late 2012 and continued into early 2013 regarding the controversial nomination of former Nebraska senator Chuck Hagel for Secretary of Defense. In 2008, Hagel had told former Middle East negotiator Aaron David Miller in a quote that appeared in Miller’s book, The Much Too Promised Land, that “the Jewish lobby intimidates a lot of people” in Washington. Hagel has also said he is “a United States senator, not an Israeli senator.”

Hagel was confirmed in February in a 58-41 Senate vote. No defense secretary had ever been confirmed with more than 11 opposing votes.

Several student governments at California universities—UC Berkley, UC Riverside, UC Santa Cruz, UC Irvine, UC Santa Barbara, and Stanford University—held votes on measures calling for their schools to divest from Israel; some of the measures passed and others were defeated.

In November, Brandeis University announced the suspension of its decade-old partnership with Al-Quds University following what it considered an “inflammatory” apology by Al-Quds for a Nazi-style rally at the Palestinian school in Jerusalem. The Al-Quds apology focused on “vilification campaigns by Jewish extremists” against the university, rather than exclusively addressing the Nazi-style rally. At the Nov. 5 rally, Al-Quds students wore black military gear, carried fake automatic weapons, gave the Nazi salute, and surrounded the main square of their campus with banners depicting images of “martyred” suicide bombers.

In December, Swarthmore College’s Hillel branch resolved that it would be willing to host or partner “with any speaker at the discretion of the [student] board, regardless of Hillel International’s Israel guidelines.” The guidelines forbid engagement with groups or speakers who “delegitimize, demonize or apply a double standard to Israel.” Hillel CEO Eric Fingerhutwarned Swarthmore Hillel that the umbrella “expects all campus organizations that use the Hillel name to adhere to these guidelines.”

Since becoming the new pontiff in March, Pope Francis I has made Jewish-Christian relations a priority, continuing the legacy of his predecessors. He praised the Jewish people for “keeping their faith in God” despite centuries of persecution, and also declared in June that a true Christian “cannot be anti-Semitic.”

The Church of Scotland agreed to amend a report titled “The inheritance of Abraham,” after outrage over the report’s questioning of the biblical Jewish connection to the land of Israel.

The Archbishop of Canterbury, Justin Welby, affirmed Israel’s “right to exist in security and peace” during his visit to the Jewish state in June.

In June, Google announced the acquisition of Israeli navigation and traffic app Waze for more than $1 billion.

Two Israeli scientists and one American Jewish scientist in October won the Nobel Prize in chemistry for work that made it possible “to map the mysterious ways of chemistry by using computers.”

In December, the governing council of CERN, the European Organization for Nuclear Research, voted unanimously to admit Israel as its first non-European full member.

In November, the European Union Agency for Fundamental Rights released a survey showing that more than 40 percent of Jews in France, Hungary, and Belgium say they have considered emigrating because of anti-Semitism.

Twitter in July agreed to release data identifying users to French authorities in response to a January ruling by a French court regarding anti-Semitic tweets posted under the hashtag #unbonjuif (#agoodjew). Users tweeted phrases like “a good Jew is a dead Jew.”

Venezuelan President Hugo Chavez died March 5 at age 58 following a two-year battle with cancer. During the 2006 conflict between Israel and Hezbollah in Lebanon, Chavez was the first head of state to condemn Israel’s actions. In reaction to the 2010 Gaza flotilla incident, Chavez said, “Damn you, State of Israel!”

“Chavez will probably be remembered as the one who made Venezuelan Jews feel that for the first time they were not welcome in their own country, a chilling reminder of past tragedies,” said Sammy Eppel, director of the Human Rights Commission of B’nai B’rith Venezuela.

In March, Netanyahu, at the request of Obama, apologized to Turkish Prime Minister Recep Tayyip Erdogan for the 2010 altercation on the Turkish Mavi Marmara ship, which attempted to breach Israel’s maritime blockade of Gaza. Yet Israeli-Turkish diplomatic relations were not fully restored, with Erdogan demanding the lifting of the Gaza blockade.

Later in the year, protests began in Istanbul’s famous Taksim Square over government plans to turn nearby Gezi park into a shopping mall modeled after Ottoman-era army barracks. The protests erupted into a widespread rebuke of Erdogan’s Islamist rule over the past decade.

In April, brothers Tamerlan Tsarnaev and Dzhokhar Tsarnaev detonated bombs near the finish line of the Boston Marathon, killing three people and injuring hundreds. Many of the injured were rushed to the Beth Israel Deaconess Medical Center, where two senior staff members are Israelis. Alasdair Conn, Chief of Emergency Services at Massachusetts General Hospital, said it was Israelis who “helped us set up our disaster team so that we could respond in this kind of manner.”

In November, the U.S. National Archives dislayed 24 out of 2,700 Jewish books and ancient documents that were recovered in the basement of the Iraqi intelligence ministry during the U.S. invasion of Iraq in 2003.

According to an agreement the U.S. signed with Iraqi authorities, the collection will be returned to the Iraqi government when its restoration is complete. But the Iraqi Jewish community says the Saddam Hussein government originally confiscated the materials from a synagogue in 1984. Forty-two groups, led by the Conference of Presidents of Major American Jewish Organizations, released a statement calling on the U.S. to assure that the archive would be protected and accessible to Iraqi Jewish communities worldwide.

Nov. 28 saw the convergence of Thanksgiving and the first day of Hanukkah in a calendar anomaly that will not occur for another 75,000 years. Marketing professional Dana Gitell coined and trademarked the term “Thanksgivukkah” for the occasion, which attracted an enormous following in the U.S. and around the world.

Jewish groups organized relief efforts after Typhoon Haiyan struck the Philippines, killing at least 10,000 people, injuring at least 27,000, and displacing an estimated 3.9 million Filipinos from their homes. The IDF set up a 148-member field hospital in the Philippines, and the first baby born in the hospital was named “Israel.”

Rabbi Ovadia Yosef, former chief Sephardi rabbi of Israel and the spiritual leader of the Orthodox Shas political party since its inception, died in October at age 93. Yosef was responsible for several breakthrough halachic rulings, including declaring a collective recognition of the Jewishness of Ethiopian Jews and ordering the Shas party to vote in favor of a law recognizing brain death as death for legal purposes.

Nelson Mandela, who became the first president of democratic South Africa in 1994 after having been imprisoned for 27 years under the apartheid regime, died in December at age 95. Jewish groups joined the global community in mourning his death. World Jewish Congress President Ronald S. Lauder called him “one of those very rare leaders who were revered not just by their own people but universally, across all political and communal divides.”