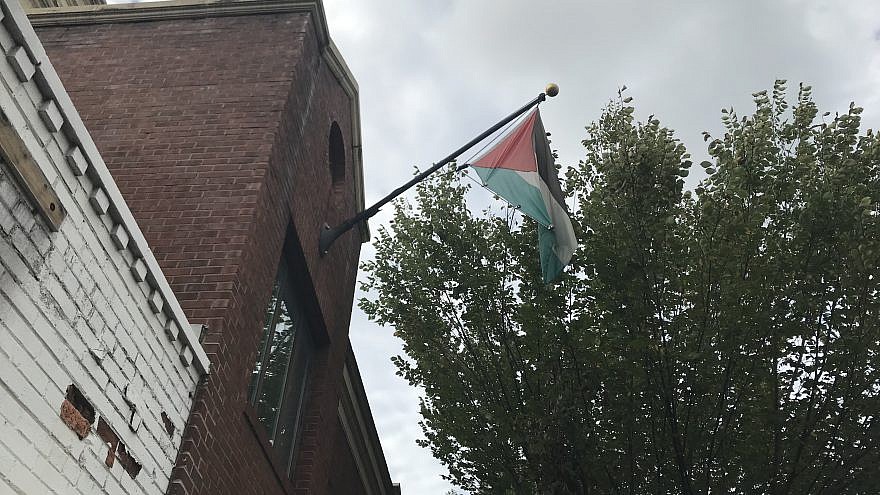 The Palestinian flag moments before being taken down from the PLO Mission in Washington in advance of its being ordered closed by the Trump administration, Oct. 10, 2018. Credit: Jackson Richman/JNS.
Spread the word.
Help JNS grow!
Share now:

(January 26, 2021 / JNS) The United States will renew relations with the Palestinians, including reopening the Palestine Liberation Organization mission in Washington, D.C., acting U.S. Ambassador to the United Nations Richard Mills told the Security Council on Tuesday.

Mills, who is serving in this interim position until U.S. President-elect Joe Biden’s pick to be America’s ambassador to Turtle Bay, Linda Thomas-Greenfield, is confirmed by the U.S. Senate, said the Biden administration will restore U.S. assistance to the Palestinians.

The Trump administration cut off most U.S. assistance to the Palestinians, including through the Taylor Force Act, due to Palestinian leadership financially rewarding terrorists and their families. The PLO mission was closed in October 2018.

Washington’s Mideast policy “will be to support a mutually agreed, two-state solution, in which Israel lives in peace and security, alongside a viable Palestinian state,” said Mills, adding that a peace deal must be agreed to by both Israelis and Palestinians.

He also warned both sides against unilateral actions.

While Biden will encourage more Arab countries to normalize ties with Israel, that’s “not substitute for Israeli-Palestinian peace,” said Mills.

Meanwhile, a report by the Palestinian Maan News Agency said that the PLO has had contact with the Biden administration. Ahmed Majdalani, who sits on the Executive Committee of the PLO, said that the Biden administration has expressed support for a two-state solution and against former President Donald Trump’s Mideast peace plan. He also said that Biden has promised to re-open the PLO’s mission as well as restore aid to UNRWA.