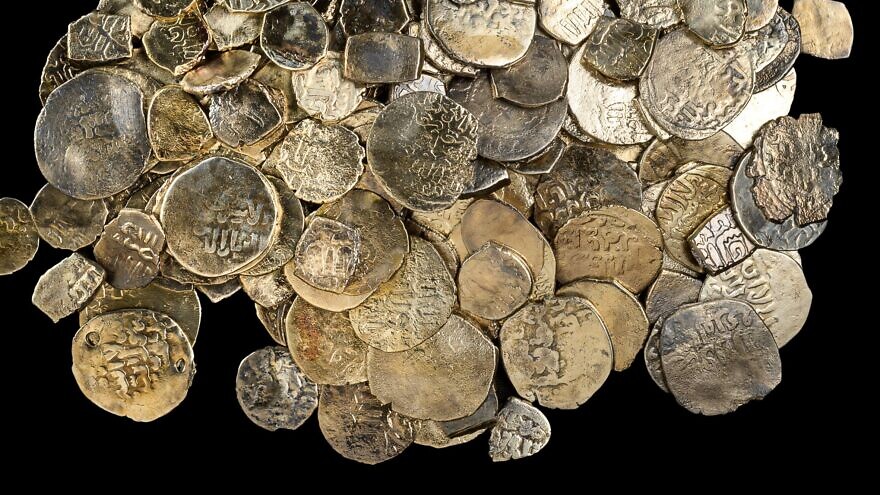 A hoard of coins from the Mamluk period discovered off the coast of Caesarea in 2021. Credit; Israel Antiquities Authority.
Spread the word.
Help JNS grow!
Share now:

(December 22, 2021 / JNS) Ancient artifacts and treasure have been discovered amid the wrecks of two ships on the sea floor off the coast of Caesarea, the Israel Antiquities Authority (IAA) revealed on Wednesday

The ships’ cargoes and the remains of their hulls—found during an underwater survey conducted by the IAA’s Marine Archeology Unit—include hundreds of silver and bronze coins and other artifacts from the Roman and Mamluk periods, mid-third century C.E. and fourteenth century respectively.

Among the items found are a red gemstone engraved with a lyre, and a gold ring with a green gemstone depicting a shepherd boy in a tunic bearing a ram or sheep on his shoulders, the IAA said in a statement.

According to the IAA, the carving on the red stone points to the Hebrew Bible and Greek mythology, as the lyre, “David’s Harp,” appears in the Book of Samuel. Greek myth features “Apollo’s Lyre,” made by the infant Hermes on the morning of his birth, causing Apollo to make him and his mother gods.

The “good shepherd” engraving on the green stone is one of the oldest images used to symbolize Jesus, possibly indicating that the ring’s owner was an early Christian. And Caesarea, where it was found, was where Christianity “began to be disseminated across the world,” said the IAA Marine Archeology Unit’s Jacob Sharvit. 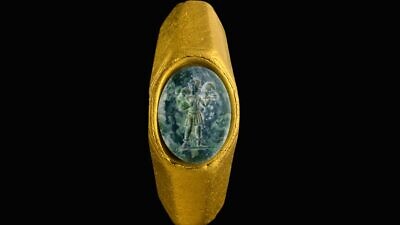 The ancient gold ring, with a gemstone depicting the “good shepherd,” which was found off the coast of Caesarea in 2021. Credit: Israel Antiquities Authority.

The ships in question “may have been anchored offshore after getting into difficulty, or fearing stormy weather, because sailors know well that mooring in shallow, open water outside of a port is dangerous and prone to disaster,” according to Sharvit and colleague Dror Planer.

“Israel’s coasts are rich in sites and finds that are immensely important national and international cultural heritage assets,” said IAA director Eli Eskozido, adding that they are “extremely vulnerable, which is why the IAA conducts underwater surveys to locate, monitor and salvage any antiquities.”

Appealing to the members of the public who engage in sporting activities along Israel’s shores, such as diving, snorkeling, swimming and sailing, Eskozido said, “If you come across an ancient find, take a note of its underwater location, leave it in the sea and report it to us immediately.”

“The discovery and documentation of artifacts at their original find spot has tremendous archeological importance, and sometimes even a small find leads to a great discovery,” he stressed.