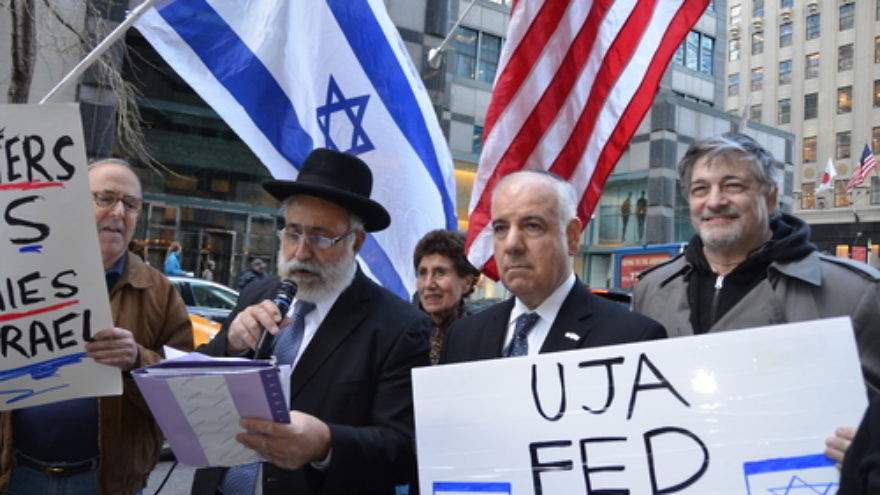 On June 1, as it has for five decades, the annual Celebrate Israel Parade (formerly the Salute to Israel Parade)—billed as the American Jewish community’s largest show of pride and support for the Jewish state—steps off along Fifth Avenue in New York City. While the parade’s theme this year for its 50th anniversary is “50 Reasons to Celebrate Israel,” a group of activists has found one particular reason to take the event to task.

Richard Allen, head of the advocacy group JCC Watch and the main organizer of the protest, told JNS.org that Jewish communal dollars “are being diverted to support BDS” and that the UJA-Federation provides funds to organizations that “provide platforms for anti-Israel activists.”

In question are three groups—Partners for Progressive Israel, the New Israel Fund (NIF), and B’Tselem—who are accused of funding and promoting the BDS movement against Israel, but all deny that allegation. The NIF, for instance, states on its website that it opposes the BDS movement and is “concerned that segments of this movement seek to undermine the existence of the state of Israel.” Yet a promotional flyer for the April 8 rally notes that NIF funds pro-BDS organizations.

“For instance, five grantees of the New Israel Fund (Machsom Watch, Coalition of Women for Peace, Women Against Violence, Social TV, and Mossawa) signed a letter to the Norwegian Government Pension Fund, urging it to divest from Israel,” the flyer says.

Partners for Progressive Israel states that it “denounces the use of BDS whenever employed as a tactic to bring an end to the state of Israel.” Yet at the same time, the group has promoted a boycott of Israeli “settlement products” made beyond the Green Line and sold in the U.S.

JCC Watch’s Allen told JNS.org, “We make no differentiation between products made in Israel and products made outside the Green Line.” He said the organizations he wants banned from marching in the parade are “Jews calling upon Jews to boycott Jews… hurting Jews.”

“To go against a fellow Jew financially is against the tradition… it’s really a shame,” Allen said.

The flyer advertising the protest featured the tag line, “It starts with boycotts.” Underneath the tag line and alongside an image showing Nazi troops posting a “do not buy” sign on a Jewish business, the flyer read, “April 1933: Nazis call for anti-Jewish boycotts.” At the bottom, the flyer stated, “April 2014: The Hamas-backed economic, cultural and academic boycott of Jews and Israel dehumanizes the Jewish state and dehumanizes and threatens Jews across the globe.”

Anti-Defamation League National Director Abraham Foxman sharply criticized the flyer, calling it a “distortion and outlandish abuse of historical memory.” To make the day of the parade “a litmus test for how much you love Israel” is “very sad, and very scary,” Foxman said.

Member of Knesset Nissim Ze’ev (Shas) was a surprise speaker at the protest, which drew about 75 people. He said the claim that Jews living in Judea and Samaria and eastern Jerusalem are “occupiers” is “legally and morally false, and a distortion of history and reality.” The United Nations Declaration on the Rights of Indigenous People “recognizes the Jewish people’s ties to the land ‘by history, culture, religion, and language,’” Ze’ev noted.

Well-known Israel advocate and Harvard Law School professor Alan Dershowitz, in an interview with JNS.org, said he is sure that there would be “no pro-BDS groups” marching in the Celebrate Israel Parade. Saying he is “categorically opposed to excluding,” Dershowitz expressed his disagreement with efforts to decide who marches and who doesn’t on the political right or left.

“No one marching favors boycott of products manufactured within the Green Line,” he said.

“The one-day-a-year parade is a unity parade, not a divisive parade,” added Dershowitz. With a with a bit of humor, the lawyer said he maintains his stance against “making exclusions” even though “some marchers—[on the] left and right—would not allow me to speak.”

“This is one day of unity,” Dershowitz said. “The next day we can continue the arguments. One day a year, we can have a unity within the Jewish community.”

Michael Mittelman, director of the New York JCRC’s Celebrate Israel Initiative, told JNS.org that participation in the parade’s 50th anniversary iteration has increased about 12 percent from the 2013 parade, with significant spikes in both marchers and floats. Some 200 groups are scheduled to march. Mittelman said that to date, no groups have withdrawn from the parade. All participating groups in the parade sign a statement that declares they “identify with Israel as a Jewish and democratic state,” according to the JCRC.

In a statement, the JCRC called BDS “a clear and present danger to the future of Israel.”

“The single most dangerous element of [BDS activists’] campaign is their stated call for a full right of return of Palestinian refugees into modern-day Israel, which would spell the end of the Jewish state,” said the JCRC, explaining that as an organization it “carries the profound responsibility to bring together the widest possible spectrum of supporters of Israel as a Jewish and democratic state.” At the same time, the JCRC said it has made the judgment call that despite the three questioned groups’ support for boycotting products “from Judea and Samaria,” those groups still “fit within the guidelines of the parade.”

Rabbi Elie Abadie, the leader of New York’s Edmond J. Safra Synagogue, disagrees. Ahead of the April 8 protest, he wrote in a letter to UJA-Federation and JCRC leaders that the questioned groups’ “disguise of being legitimate ‘Pro-Israel Jewish Groups’ has been already discovered and revealed as false.”

“These are the same groups who continue to accuse Israel of being an Apartheid State and a human rights violator, likening Israel to Nazi Germany,” Abadie wrote. “They are the ones who supported and celebrated the Goldstone Report, falsely accusing Israel of war crimes. … We must not condone their actions, let alone allow anti-Israel groups to march under the banner of a legitimate group celebrating Israel.”