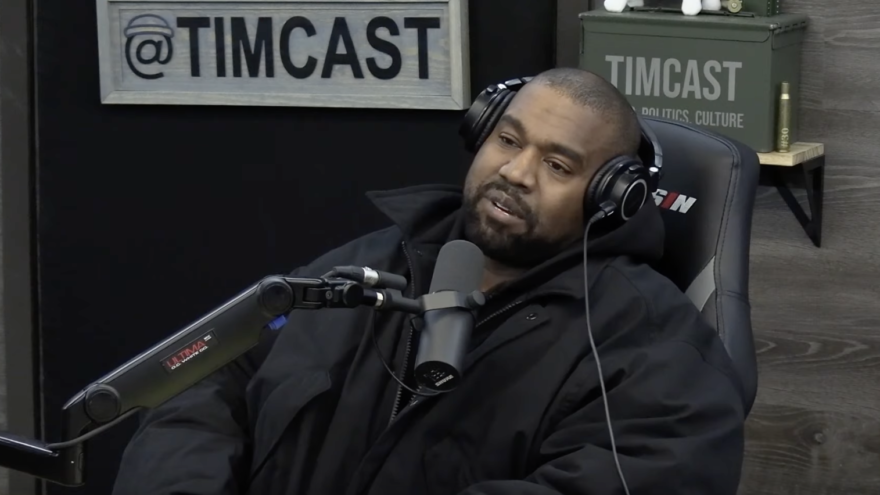 Ye (formerly known as Kanye West) walked out of an interview on podcaster Tim Pool’s show on Nov. 28 after being questioned about his antisemitic claims. Source: YouTube screenshot.
Spread the word.
Help JNS grow!
Share now:

(January 23, 2023 / JNS) The Australian Jewish Association (AJA) on Monday called on authorities in Canberra to not issue rapper and fashion mogul Kanye West a visa to enter the country, on the grounds that his planned visit constitutes a threat to the country’s Jewish community.

“Kanye West (or Ye) has engaged in incitement against Jews on numerous occasions as well as spreading hateful conspiracy theories and praising Adolf Hitler. In response, several companies such as Adidas and Balenciaga have cancelled business arrangements and several social media companies have removed him,” the AJA said in an “urgent” letter sent to Australian Minister for Immigration, Citizenship and Multicultural Affairs Andrew Giles.

“Antisemitism is at elevated levels in Australia, part of a worldwide trend. Multiple recent antisemitic incidents across Australia have specifically referenced Kanye West, including graffiti in Melbourne and leaflets in Brisbane. The Australian Jewish Association fears that a visit by Kanye West is likely to inflame the tense situation and even risks causing violence,” continued the letter.

“We ask that you exercise your powers and refuse Kanye West a visa on character grounds as provided in 5501 Migration Act 1958. AJA contends that Kanye West does not pass the character test and his conduct is not in line with the expectations of the Australian community. We believe that refusing his visa is necessary for the protection of the Australian community, particularly the Jewish community.”

AJA was informed that Kanye West, who calls himself 'Ye' intends to visit Australia

“I see good things about Hitler, also, every human being has value that they brought to the table, especially Hitler,” said West, adding, “I love Jewish people, but I also love Nazis.”

West also attempted to compare himself to Jews hiding in the Holocaust, claiming, “There are Jewish people basically hiding me under their floorboards right now. It’s like a reverse version of the Holocaust.”

“Nazis are kind of cool,” he said.

West, who now goes by Ye, has also claimed that a “Jewish underground media mafia” was targeting him, that he doesn’t believe in the term “antisemitic,” and that today’s music industry is akin to “modern-day slavery.”

West began making antisemitic comments on Oct. 7 when he tweeted that he would go “death con 3 on JEWISH PEOPLE.” Despite the loss of major business partnerships, he has continued to make anti-Jewish and pro-Nazi comments.

In December, a man in his 40s was attacked in New York City by someone shouting antisemitic comments, including, “Kanye 2024,” a reference to West’s presidential campaign.

Watchdog group StopAntisemitism named West as the “2022 Antisemite of the Year,” explaining that his “threats of violence, hateful conduct and hate speech all led him to winning this year’s title.”