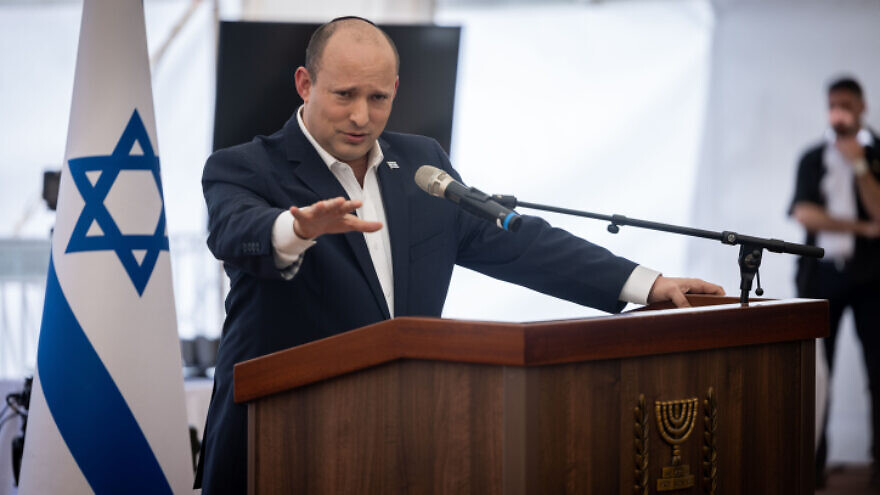 In special interviews with Israel’s three major news channels, Bennett discussed the current terror wave as well as the upheaval in the coalition.

“The Joint Arab list is not in the government nor will it be. You don’t have to believe every media spin,” he said.

Bennett criticized Joint List chairman Ayman Odeh over his call on Sunday for Arab members of Israel’s security forces to lay down their arms.

“What he did—calling on Arab Israeli police officers to revolt against the state—first of all, in my opinion, it is a criminal offense and a despicable act,”  he said.

Addressing Arabs serving in the security forces, Bennett said, “I am proud of you. The people of Israel are proud of you. We love you. Don’t give in to this bullying.”

The Israeli premier also lauded Mansour Abbas, the head of the Ra’am Party, saying, “This is a collaboration with a leader from Arab society who recognizes the State of Israel as Jewish, who is moderate, who tries to bridge [the sectors], who wants to help in the war on crime in the Arab sector—and we’re doing all of that.”

Asked if he would ever consider collaborating with opposition leader and former prime minister Benjamin Netanyahu, Bennett replied, “I don’t veto it—enough with that. What the public needs is not a veto but rather for all of us to sit together. Netanyahu is not an enemy. He has done many things but it’s time to move on.”

With regard to the ongoing wave of terrorist attacks, which have so far claimed the lives of 14 Israelis, Bennett said, “For over 100 years, every few years there is a wave. We are very determined and we will win. We’re entering Jenin, we entered Yabad, and we’re going after terrorists in their bases. We will win. We will overcome this.”

The current uptick in terrorist attacks “is characterized by individuals who are not in the system so it’s hard to get intelligence. It’s hard for you to know what goes through the mind of a young man with a gun, but this is where we’re being proactive, gathering intelligence, carrying out raids and making arrests—even in the most dangerous places,” he said.

“We have excellent security forces—the IDF, counterterrorism units, the Shin Bet—we can count on them,” he added.

Asked about the decision to replace the security barrier near the so-called “seam zone”—a term used to refer to an area east of the Green Line and west of the Jerusalem-adjacent security fence—with a 40 kilometer concrete barrier, Bennett said, “For the last decade there has been neglect of the barrier. It has hundreds of breach points. We are fixing that as well as bolstering troops on the ground.”

The Israel Police, he added, “have also been starving [for budgets] for years. The police officers are real heroes—and this is also the opportunity to say how proud we are of our policewomen and policemen—and now we are giving them more resources. Some of them didn’t even have basic gear….”

Asked whether he believed terrorist organizations see his government as weak, Bennett replied, “Nonsense. On the contrary. If you look at our policy in Gaza, for example, while our predecessors would tolerate rockets [fired] over “electrical malfunctions” we strike back over so much as one [arson] balloon. The situation there [on the Israel-Gaza border] is much calmer.”

As for the political upheaval that has rattled the government with MK Idit Silman’s decision to step down as coalition chair—a move that lost Bennett the fragile majority in parliament—he said that while early elections can never be ruled out, he does not believe such elections are likely.

“What’s really at stake is shoring up the government after the blow we received—and it is a blow and a very negative development,” he said. “But we can run the government like this for the duration. The other choice is to roll into the abyss of another election and another election,” he added, alluding to the two years in which Israel held four consecutive election campaigns before he and Yesh Atid leader and Yair Lapid formed the current coalition.

Asked about the immediate aftermath of Silman’s resignation, he said that “the first order of business was to stabilize the faction. I’ve spoken with the party heads and this government is moving forward. The alternative is to return to the dark days of more election campaigns. Instead of fighting terrorism, fighting each other.”

Bennett rejected the claim that the current 60-60 split in the Knesset has left his government paralyzed, saying that political paralysis “is measured in actions. Controversial laws are hard to pass, but we have no issue with regular legislation.”

Opposition members lashed out at Bennett following the interviews, calling him “desperate” and accusing him of trying to “defraud” the public.

“Bennett, who broke every one of his promises to his constituents, continues to lie. Bennett lost the majority in the Knesset … so he is also spreading lies against Idit Silman, who unlike him has remained true to the principles for which she was elected,” said the Likud in a statement.

“Bennett understands that his time is up and that it’s time for a strong government that restores peace and security to the public.”

The Religious Zionism Party said, “Naftali Bennett gave a series of alarmed, desperate and pathetic interviews. The man fabricates stories. He has not assumed responsibility for Israel’s accelerated deterioration under his lax government, only throws unfounded accusations around.

“He continues to prove he is detached from the political reality and unfortunately also from the security reality. He has enslaved the State of Israel to the Islamic movement and no embarrassing pun can hide that.

“Bennett’s narcissism is dangerous and jeopardizes Israel. But the truth is that Bennett and his associates understand very well that this government has reached the end of its road. The path of the government of division and hatred has come to an end and God willing, a national Zionist government will soon be formed.”