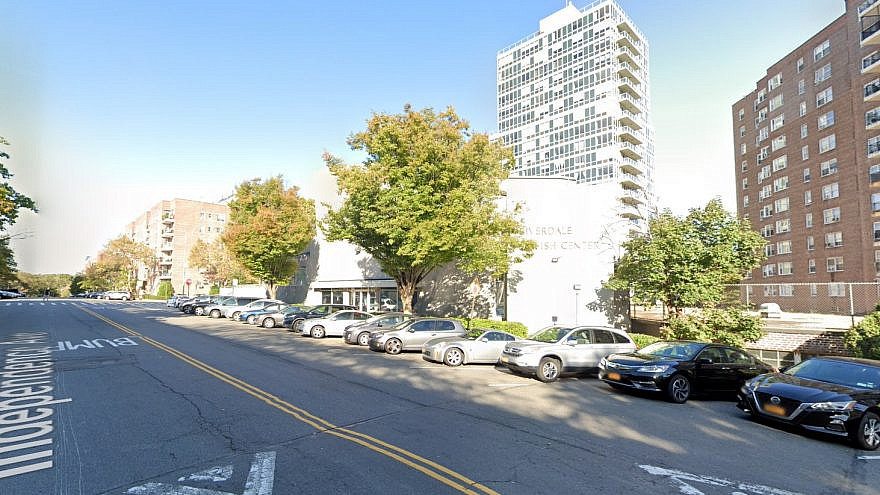 (April 26, 2021 / JNS) Law enforcement has stepped up its presence in front of Jewish institutions in the Riverdale section of the Bronx, N.Y., as detectives from the New York Police Department’s 50th precinct and its NYPD Hate Crimes Task Force continue to investigate a series of incidents at synagogues there.

At the Riverdale Jewish Center, the perpetrator was confronted by volunteers trained by Community Security Services. The man hurled rocks at the volunteers before fleeing. None of the volunteers were injured, and footage they took at some of the locations and photos confirmed that the same individual has been responsible for all of the acts of vandalism.

“From a security perspective, we are concerned that Jewish institutions are being harassed or vandalized for the third consecutive time in one week,” said Evan Bernstein, CEO and national director of CSS, which trains volunteers to help secure Jewish synagogues and institutions. “The eyewitness accounts of our volunteers, coupled with footage of the alleged perpetrator days before committing the acts, represents a clear desire to inflict harm on the Jewish community.”

Additional photos of individual wanted for questioning for multiple acts of vandalism of synagogues in @NYPD50Pct in Riverdale.

According to the Jewish Community Study of New York: 2011 Comprehensive Report from the UJA-Federation of New York, more than 20,000 Jews live in the Riverdale/Kingsbridge sections of the Bronx, N.Y. The community includes nearly a dozen synagogues, Jewish day school and preschools, a senior residence and more.

In a tweet on Sunday that linked to a news report on the vandalism, New York City Mayor Bill de Blasio wrote “UPDATE: The NYPD Hate Crimes task force has a solid lead on the vile acts of anti-Semitism in the Bronx, and we will take swift action against the perpetrators. If you have any more information on the case, contact the NYPD right away.”

“I was appalled by a report that an individual threw rocks at glass windows and doors in two Bronx synagogues, smashing and breaking them,” the governor said in a news release on Sunday. “We have no tolerance for discriminatory acts that seek to divide us rather than bring us together.

“I am directing the New York State Police Hate Crime Task Force to immediately offer assistance in the investigation being conducted by the NYPD,” he continued. “We stand with Jewish New Yorkers—an essential part of the fabric of our state—as we do with all victims of bigotry, and I look forward to seeing this investigation resolved quickly.”

Democratic Rep. Jamaal Bowman, whose congressional district includes Riverdale, posted on social media: “We are angered, saddened and disturbed to hear of the anti-Semitic hate crimes in Riverdale. Riverdale is an inclusionary, accepting and loving community. Riverdale is a resilient community, and hate has no home there, or anywhere in our district, state or country.

“We condemn these hate crimes, and we and recognize the need to name the threat against our Jewish family and address it head-on,” he continued. “As we see a continued rise in anti-Semitism, we must remain vigilant and come together in love and care for one another—and against anti-Semitic hate.”