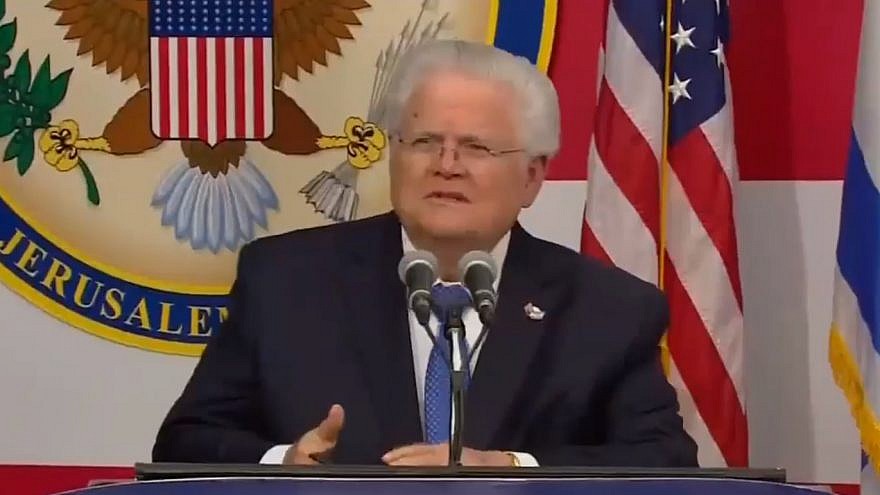 (December 27, 2022 / JNS) Prominent Christian pro-Israel organizations are speaking out against Ye (formerly known as Kanye West) after the rapper used Christianity to justify a months-long series of antisemitic statements.

“Christians are mandated by God to stand with the Jewish people,” Pastor John Hagee, founder and chairman of Christians United for Israel (CUFI), told JNS. “One cannot be antisemitic and follow the teachings of Jesus.”

Among many other antisemitic statements, Ye tweeted that he would go “death con 3” on Jewish people, accused Jews of giving Hitler a bad reputation and that they should forgive the Nazi dictator and trumpeted tropes about Jewish control of the media and the entertainment industry.

Ye also stated that he believes “Jews are very intelligent, but they don’t deserve to be in charge of everything because they don’t put Christ [first].”

Ye also claimed he could not be antisemitic because he and all black Americans, “as the blood of Christ,” are also Jewish.

The Simon Wiesenthal Center has called out Fuentes’s past statements, which include Holocaust denial and “I piss on your Talmud. Jews get the f***k out of America.”

Yiannopoulos has said that secular Jews “all should be hanging from city hall.”

Christian Zionist organizations condemned Fuentes and Yiannopoulos along with Ye.

“It is not hard to recognize that none of the comments align with the Christian faith,” said Serene Hudson, vice president of advocacy at Passages. “Yiannopoulos’s comment promoting the lynching of Jews is evil, and the image of Jews hanging in front of city hall promotes a concept of state-sponsored persecution. Such calls for anti-Jewish violence should be utterly condemned.”

Hudson went on to say that such comments go against Christian values.

“Being a Christian means recognizing that the Church has a responsibility to repent of two millennia of Christian antisemitism, including such theological errors as supersessionism and practical persecutions like expulsions and anti-Jewish riots,” she told JNS. “Promoting Christian values that reflect genuine faith means standing against the hatred and demonization of the Jewish people.”

CUFI, an American Christian pro-Israel group with more than 10 million members, came out unequivocally in its condemnation of Ye and his associates.

“I will simply say to all believing Christians that antisemitism is a sin and as such it damns the soul,” Hagee told JNS. “Antisemitism is absolutely despicable. I will not dignify these individuals with a point-by-point refutation of their absurd and obscene comments. These people are antisemites and antisemitism should be shunned by every corner of society.”

‘I tried to track his pastor down’

The Philos Project, a Christian advocacy organization that seeks to promote positive Christian engagement in the Middle East, struggled to understand how Ye came to justify his antisemitism on a Christian basis.

“When Ye’s first comments happened, I tried to find out who his pastor was because I thought maybe Ye and his pastor could come to Israel with the Philos Project and introduce him to Jews who are not progressive but conservative and may share some of his beliefs on family and pro-life issues, etc.,” said Luke Moon, deputy director of the Philos Project, to JNS.

“I tried to track his pastor down, and he seemingly doesn’t have one,” Moon recounted. “Ye needs to get a pastor—not just groupies. Or maybe rehab—to control his mental health issues.”

Hagee said that Christians must stand with Jews against the rising tide of antisemitism.

“Our message is simple,” he said. “Our Jewish brothers and sisters are not and never will be alone. If a line must be drawn, let it be drawn around Christians and Jews. We stand with the Jewish community on good days and bad. We abhor antisemitism and will fight every day to see it rooted out of our communities and our country.”