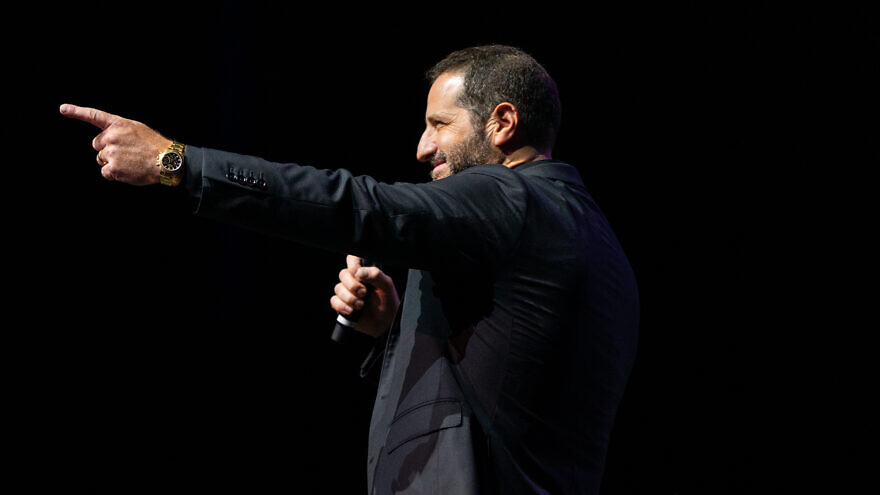 Born Mordechi “Modi” Rosenfeld in Tel Aviv, and raised in a traditional Ashkenazi Jewish family that moved to Long Island when he was 7, the 52-year-old comic has carved a deep niche among Jewish Americans. He performs everywhere from star-studded comedy festivals in Times Square to holiday galas for companies that employ both ultra-Orthodox Jews and non-Jews.

He had the audience in stitches at the Republican Jewish Coalition’s winter meeting in Las Vegas in November with a bit about shivas, including the funeral of Queen Elizabeth, and the protracted nature of her funeral.

“When a Jew dies we bury him—PHOOM! Right away!” Modi shouted, gesticulating toward the well-heeled crowd of mostly middle-aged and older Jewish conservatives, who roared with laughter. “In Florida, when old people take a nap, they’re like, ‘Noooo! Put the shovel away! Please! It’s just a nap!’…But the Queen, oy the Queen, did you see how they schlepped her, that poor thing?”

Trudging across the stage, Modi pantomimed the march behind the Queen’s casket, peppering his joke with Yiddish phrases and words. “They dragged her to Kensington, then to Shmensington… the mispocha walked behind, exhausted…Everybody had already grabbed from the yurisha (inheritance). They all chupped (grabbed) up a brooch or a necklace, except for Meghan [Markle]. She got gournish (nothing), walking behind Charles thinking, ‘Oy, thank heaven this bitch finally died.’”

(For those who think the bit too mean, Modi responded in an Instagram video that he himself was not calling the Queen a bitch, only imagining Meghan’s perspective).

Originally had no plans to be a comedian

After college at Boston University, Modi worked as an investment banker and had no plans to become a stand-up comic. But after impersonating coworkers, he received encouragement to perform at open-mics, and soon was hooked.

The comic’s been gaining steam on social media, acquiring followers by the thousands on WhatsApp, Instagram (where he has 153,000 followers) and TikTok—typically the province of the young, hip and trending. His podcast, “And Here’s Modi,” is available on Apple podcasts.

Modi, who some compare to the late Jackie Mason in his focus on the Jewish community, got his start performing in the Catskill Mountains Jewish resorts. He fondly remembers meeting his idol, the comedian Alan King, there at the Nevele Grand Hotel. Modi sees himself as an heir to the old-time Jewish comics like Freddie Roman (who passed away this year at 85), Stewie Stone, Mal Z. Lawrence and King.

“King was one of my favorites,” Modi tells JNS. “He was a Jew and proud—laughing with our people, not at our people, and I loved him for that, and for his timing and elegance.”

“One big comedic influence was the Lubavitcher Rebbe,” he says. “I’m sure he had a sense of humor. But the idea was, ‘Always be helping others,’ and if comedy can help others, that is the goal.”

His strongest platform, other than live performances, is WhatsApp, which is popular in the Israeli and Orthodox Jewish worlds, where numerous groups of Modi fans have organized.

“When someone shows an interest in Jewish comedy I get fed into it, Baruch Hashem,” he says. “There are synagogues and golf groups where a lot of my stuff is landing.”

Modi did not hesitate to weigh in on the controversy involving fellow comic Dave Chapelle, whose recent monologue on “Saturday Night Live” was viewed by many as antisemitic. (In it, the comic pretended to read an apology for offending Jewish people and remarked, “And that, Kanye, is how you buy yourself some time”—a reference to another recent controversy in which Ye (formerly Kanye West), the fashion industry mogul and rapper, tweeted that he was “going death con 3 on Jewish people.” Ye also spoke of Jews supposedly having disproportionate influence in Hollywood.)

Chappelle said he could understand how Ye would “adopt the delusion that the Jews run show business,” adding that “it’s not a crazy thing to think, but it’s a crazy thing to say in a climate like this.”

Chappelle also said, “I know the Jewish people have been through terrible things all over the world, but you can’t blame that on Black Americans. You just can’t.”

Modi says he doesn’t know if Chappelle’s remarks “came from a hateful place or not” and he believes in giving other comics the benefit of the doubt if it’s a gray area.

But he adds that he believes comedy “should not come from a hateful place”—and pointed out an irony.

“It’s ironic because if people make fun of Black or Latino people [in a hateful way]—who tends to be the first to stand up for them?” asks Modi. “The Jews.”

He adds, “When I see Chappelle taking liberties it opens me to say I can take liberties, too, though not from a hateful place. I would never say the ‘N’ word. But I had a joke I had previously hesitated to tell: ‘These people who say they are the ‘real Jews’ go out screaming passages from the Bible, interpreting them in a cockamamie way. They’re compared to Nazis! But Nazis were organized, with funding, leadership, and a cause they believed in. These people could be distracted by a sale at Foot Locker!’”

“Cancel culture is antisemitic. If you say something against somebody who’s Asian, a Latino person, gay, trans—you’re finished,” he deadpans. “You got to get a lawyer, a new job, change Twitter, you’re done. DONE!”

“If somebody says something bad against Jews, the worst that can happen to them is they make them visit a Holocaust Museum, which is the stupidest idea in the world. You’re taking someone who hates Jews into a Holocaust Museum. They come out of there, ‘Wow! Holy Cow! That was amazing! ‘Get me a T-shirt, a poster, something to remember this place!’”

Modi has received some negative feedback from fellow Jews for mentioning the Holocaust in jokes. He hopes these jokes will reach people who don’t even know the Holocaust happened, he says.

“Maybe it will prompt people to look up the Holocaust, watch ‘Schindler’s List,’ or go to a Holocaust Museum,” he says.

Modi believes in humor as a hedge against fanaticism, arrogance, and inability to see the self—and sees a comic’s role as a watchdog of the powerful.

“When we have a president—Biden, Trump—and comedians laugh at him—it calms the nation,” he says. “Yes, he’s bumbling, he’s Tweeting absurd things…In Russia, can they make fun of Putin? In North Korea, can they laugh at the dear leader?…What’s important is the ability to laugh at ourselves.”