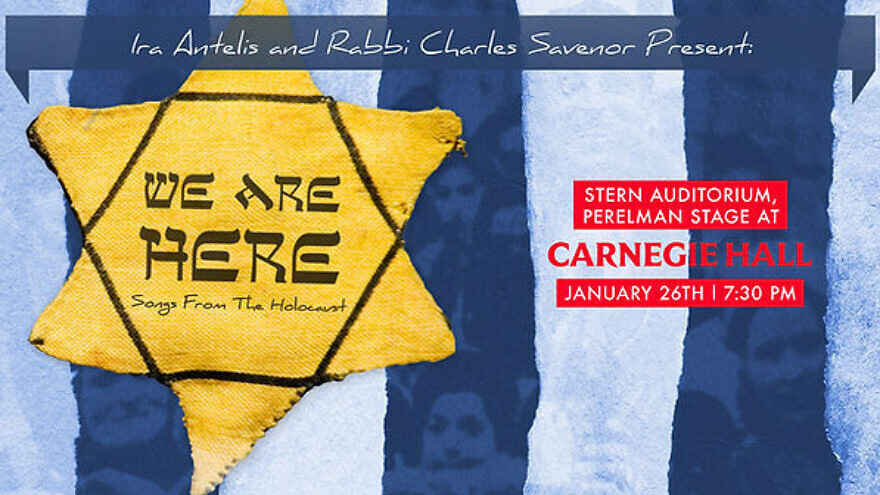 “I thought, who carries on the message of the Holocaust? Because in my life, he was the figure for me. And I started just researching some things about him,” Antelis told JNS.

That endeavor led Antelis to a book Wiesel wrote the forward to called We Are Here: Songs of the Holocaust, a collection of songs written in the ghettos and concentration camps of Nazi-occupied Europe. After locating the songbook, Antelis decided to organize a concert in his hometown of Chicago, based on the music. It never came to fruition due to the COVID-19 pandemic.

But following the lifting of restrictions and a decision by Antelis to re-launch his efforts, he searched online and stumbled upon an article by Bret Werb, staff musicologist at the U.S. Holocaust Memorial Museum, called Fourteen Shoah Songbooks.

“I said to myself: There’s a concert. We’re going to do a concert on these 14 songbooks—one song from every book, and honor the writers and people who put the songbooks together,” said Antelis, who produced the concert at Temple Sholom Chicago in April in conjunction with Yom HaShoah, the annual Holocaust day of remembrance.

Antelis, determined to bring the concert to New York, revived the pandemic-era idea with an old Chicago friend, Rabbi Charles Savenor, who served as director of congregational education at Manhattan’s Park Avenue Synagogue and is currently executive director at Civic Spirit. The two had a chance encounter in New York fifteen years after their last meeting when Antelis presented Savenor with his vision.

“I’m not musical at all. I can’t carry a tune. I have no rhythm. I knew about the music of the Holocaust, but when Ira started telling me what his mission was and about the music, it completely aligned with something that I was passionate about, interested in, and I’d already been researching,” Savenor, who had recently taught a course on Holocaust memoirs, told JNS.  “This form of resistance is something that really spoke to me. And it felt like something really sacred that we needed to commemorate.”

That meant, for Antelis, that the concert was not to be held at Savenor’s synagogue, one of the largest in the United States, or at Manhattan’s Museum of Jewish Heritage. He was insistent that the event takes place at the famed Carnegie Hall, even if it meant a significant amount of money came out of his own pocket.

Antelis and Savenor say they have been blown away by the immense response, both in and outside the Jewish community.

“The concert has really taken on a life of its own,” said Savenor, who will host the concert, which he termed as more of a communal event. “It’s no longer a commemoration of the past. The diversity and the music and the messaging is really being elevated and transformed into a statement about confronting discrimination today.”

Maddie Burton, a co-producer for the concert, told JNS that Dolan’s appearance, in particular, is “reflective of the fact that it’s not just Jewish people who are looking to take a stand against antisemitism, that it really is this larger cultural reaction to wanting to declare loud and proud but that the Jews are still here.”

With a month left until the concert, Burton said, “We are putting finishing touches on the melodic and harmonic choices that we’re making, and then in January, we’ll really ramp up rehearsals, working with our full orchestra and getting all of our performers together in the room.”

There is also outreach to be done with the Jewish community and promotion to fill the 2,800-seat auditorium. But, Burton said that the response so far from those agreeing to take part in the event is promising for its overall success.

“It wasn’t easy, per se,” said Burton. But every single person who signed on pretty emphatically said this is something that they not only want to, but need to be a part of.”