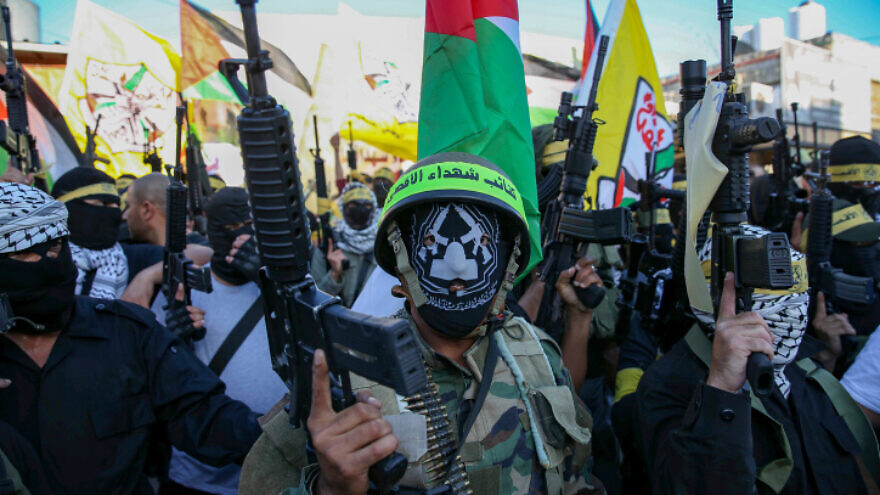 Palestinians from the al-Aqsa Martyrs Brigades of the Fatah movement participate in a rally of support for the Palestinian president Abbas, in Halhoul, 27 June 2021. Photo by Wissam Hashlamoun/Flash90
Republish this article
1108 WORDS
Spread the word.
Help JNS grow!
Share now:

For the fifth straight day Monday, protesters called for the ouster of Abbas following the death of activist Nizar Banat. PA security forces forcibly removed Banat from his home last Thursday near Hebron. He was beaten with iron rods by two dozen officers, taken for questioning and pronounced dead a few hours later, according to his family, Reuters reported. Banat was a vocal critic of Abbas.

Large-scale protests ensued. Videos uploaded to social media show Palestinian forces, some in riot gear, others in plainclothes, firing tear gas at protesters, hitting them with fists and clubs and targeting reporters. Journalists on the scene expressed their anger, with one tweeting, “Abbas will fall, the authority will fall, and the security coordination dogs will fall.” Hundreds also protested on the Temple Mount.

“These protests are almost unprecedented in their intensity, in the number of people participating in them,” Arab-Israeli journalist Khaled Abu Toameh told JNS. “For the first time you see large numbers of people chanting ‘Down with Abbas’ … It’s no longer about Nizar Banat only. It’s about people demanding regime change.”

“Abbas has completed the 16th year of a four-year term. Under him, things seem to be going in the wrong direction for the Palestinians,” Toameh said, noting divisions within Fatah, the loss of the Gaza Strip to Hamas, lack of freedom of speech and the recent crackdown on activists.

He added, “The feeling on the Palestinian street is that the Palestinian leadership is on a different planet, that it’s insensitive to demands regarding elections, regarding reform, regarding corruption. If you take all these things into consideration, you see how serious it is. The Palestinian people feel they’re not part of the Palestinian decision-making process and Abbas has turned it into a private fiefdom. People are saying enough is enough.” 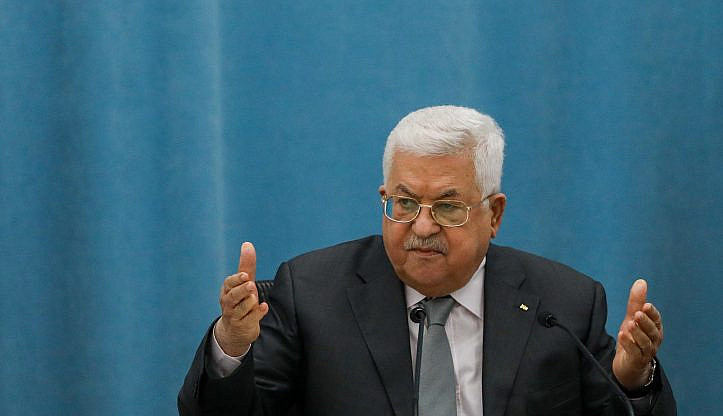 Palestinian Authority leader Mahmoud Abbas speaks during a meeting of the Palestinian leadership in Ramallah, May 7, 2020. Photo by Flash90.

‘The ground was ready’

A protest took place Monday morning in Bethlehem, while events were quieter in Ramallah. But Toameh said that “even if [protesters are] not on the street,” the social media protests are going full blast with campaigns by political activists. “It’s like a mass campaign going on against the Palestinian Authority,” he said.

Eyal Zisser, vice rector of Tel Aviv University and a professor of Middle Eastern studies, told JNS that the killing of the activist was “a trigger. The ground was ready.” He noted that Banat’s death came after Abbas canceled Palestinian elections in April. Further, Hamas’ popularity rose in the eyes of Palestinians following the terror group’s war with Israel in May, while support for Abbas’s Fatah Party dropped, according to a June poll by the Palestinian Center for Policy and Survey Research.

David Koren, senior researcher at the Jerusalem Institute for Strategy and Security, and director of the eastern Jerusalem strategic planning department at the Israeli Ministry of Education, said dissatisfaction with Abbas is broad and extends beyond Hamas to within Fatah. Frustration stems first and foremost from Abbas’s decision to cancel elections, he said.

Although Abbas blames Israel’s refusal to allow PA elections in eastern Jerusalem, Koren said he nixed the elections because he saw “Hamas would run as one party and, in the case of Fatah, there would be 20 or 30 parties. He understood clearly that if he held elections, he would lose.” Yet calling off elections came with a cost, leading Abbas opponents from Fatah to protest and send the leader the message that, “You can decide not to run elections, but we will be the ones to decide the temperature in the street in the West Bank,” said Koren.

Hamas is also turning up the heat, hoping to one day seize control of the West Bank from Fatah as it did in Gaza. It issued a series of statements following Banat’s killing to further undermine the PA’s authority. On June 25, Hamas chief Ismail Haniyeh called Banat’s widow to offer condolences. In a June 24 statement on its English-language website, Hamas said it held Abbas and the PA fully responsible for “this heinous crime that is added to the series of crimes and violations of this authority against our people.”

Hamas has since condemned an investigative committee the PA intends to establish to look into Banat’s death, stating, “There is no trust in a committee formed by the authority, its government, and services for they all carried out the assassination and must all bear full responsibility for this heinous crime.”

Hamas knows it’s hardly the guardian of human rights in Gaza, Koren said, but is happy for the opportunity to oppose Abbas.

It remains unclear whether or not these protests will result in the end of Abbas’s tenure.

“I don’t see any actual possibility that he won’t continue as president of the Palestinian Authority,” Koren said, noting Abbas’s iron grip on the PA, Fatah and the security forces.

Most observers also agree that Abbas will not be replaced by Hamas.

“Israel is there. It won’t let Hamas repeat what it did in Gaza,” Zisser said.

“That’s the dilemma,” Toameh said. “The party that is very popular cannot come to power because it’s designated as a terrorist organization and the world will boycott them. … The Palestinians are caught between two bad governments, or two bad rulers, Fatah and Hamas.”

From the Israeli perspective, non-Hamas alternatives to the PA aren’t appealing either, according to Toameh. “On the contrary, they’re attacking the Palestinian Authority for being traitors, for conducting security coordination with Israel. … Who says the alternate visions to Abbas, whether it’s Hamas or others, are more pragmatic and more moderate?” he said.

Banat, the slain activist, attacked the PA not just for human rights violations but also for cooperating with Israel, accusing it of giving “moral cover” for the “occupation.” Before elections were canceled, Banat planned to run for the Palestinian parliament on the Freedom and Dignity list assembled by Marwan Barghouti, a terrorist serving multiple life sentences in an Israeli prison.

Whether the Palestinians choose a more radical alternative to Abbas, or take a more pragmatic course, is an “internal Palestinian problem,” Toameh said.

Koren, while agreeing that Israel should not interfere in Palestinian party politics, nevertheless said, “Every Palestinian problem at some time becomes an Israeli problem. Problems that start on the Palestinian street most of the time end up at the door of Israel.”