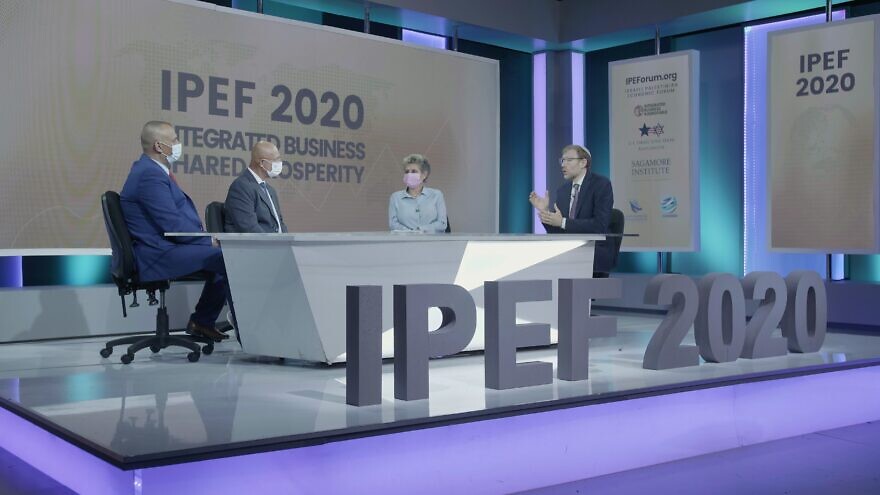 (October 20, 2020 / JNS) The worldwide coronavirus pandemic has devastated economies and businesses around the world, but a bright spot exists towards the opening of new avenues of investment for Israeli and Palestinian entrepreneurs. This is thanks to the signing of the Abraham Accords, which normalizes relations between the Jewish state and Arab Gulf nations, including the United Arab Emirates and the Kingdom of Bahrain.

In light of such realities, this week the Integrated Business Roundtable (IBR)—a group of impact investors committed to developing the capacity for joint Israeli-Palestinian Initiatives in Judea and Samaria—held its second annual Israeli-Palestinian Economic Forum (IPEF 2020).

The IPEF was founded with the belief that the path to peace between Israelis and Palestinians will come through investment in high-quality business enterprises, which will lead to shared prosperity in Judea and Samaria.

The event featured panel discussions with Israeli and Palestinian business experts and entrepreneurs, along with clips showcasing businesses throughout Judea and Samaria, which benefit both communities, and where Jews and Arabs work together side by side.

As a result of the ongoing pandemic, this year’s event was held online and hosted by Avi Zimmerman, an IBR member and president of the Judea and Samaria Chamber of Commerce and Industry, a nonprofit organization dedicated solely to regional economic development that served as another one of the event sponsors. Other sponsors included the Sagamore Institute, the U.S. Israel Education Association and the Israel Leadership Development Fund.

Zimmerman explained to JNS that “there is a window of opportunity for Israeli-Palestinian economic partnerships to flourish following the monumental Abraham Accords. IPEF 2020 is a milestone event that identifies successes while challenging the business and public-policy communities to make further progress.” 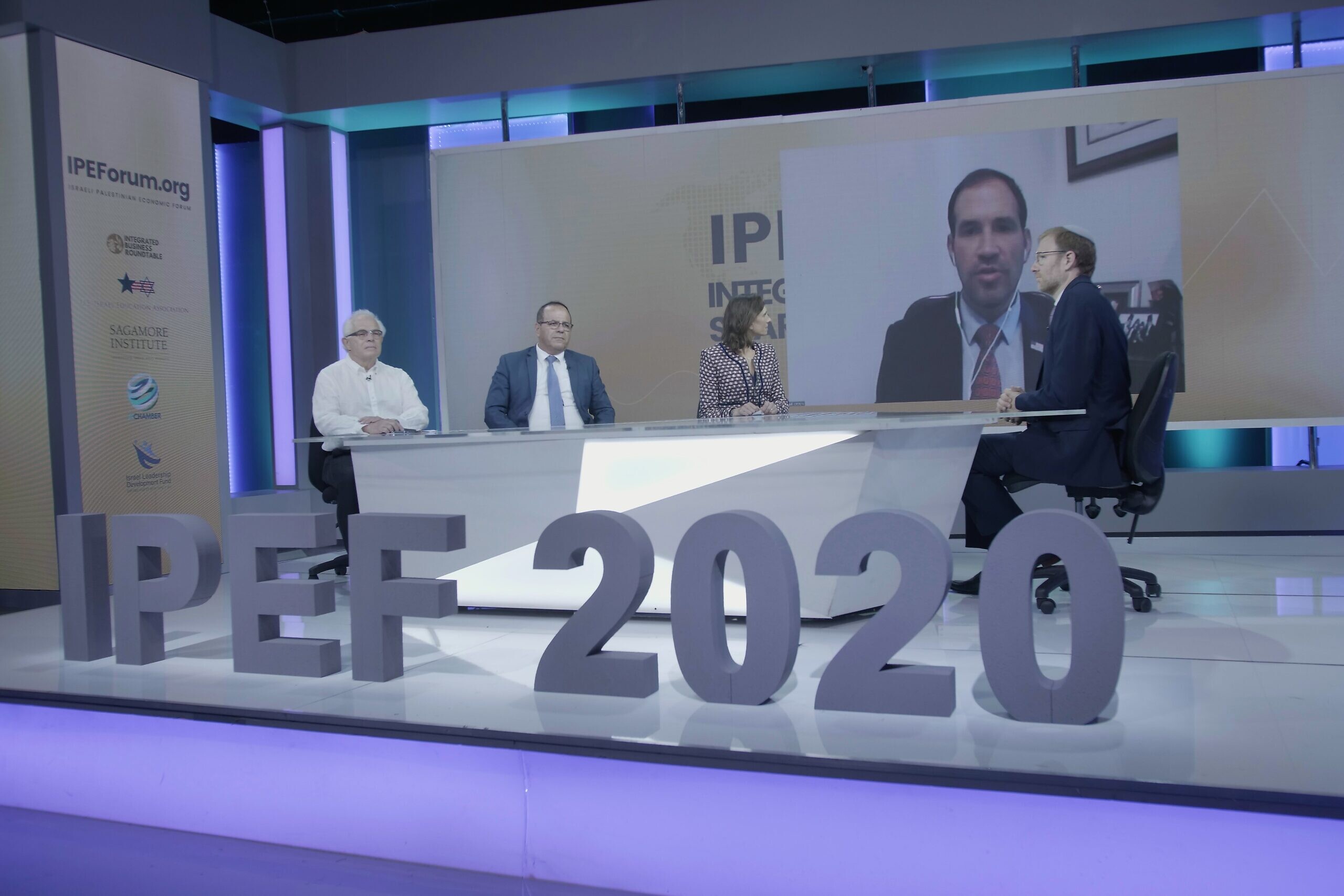 Professor Glenn Yago of the Milken Innovation Center, Ayoub Kara of the Economic Peace Center, businesswoman Tally Zingher, and on the screen in back, Aryeh Lightstone of the U.S. embassy in Israel. Photo by Amitai Eisenberg.

‘Peace through economic strength is the right formula’

So what is the connection between the Abraham Accords and Israeli-Palestinian business development?

According to Israel’s Minister of Regional Cooperation Ofir Akunis, who spoke at the event, the model towards normalization between Israel, the UAE and Bahrain could be used to springboard ties between Israelis and Palestinians.

He said that instead of the so-called land-for-peace model, “peace through economic strength is the right formula for true peace in the Middle East.”

Akunis gave examples of how his ministry is working on projects to benefit both Arabs and Jews, including a new hospital and medical center in the city of Ariel in Samaria. He added: “We are witnessing the real new Middle East: peace for prosperity.”

Eli Shaviro, the mayor of Ariel, agreed with the’ “peace for prosperity” assessment. Serving as a guest on one of the event’s panels, he explained, “If there is a good economy there is stability. I believe as we delve deeper into it, the more we are doing things together—together with Palestinian friends living in the same region—and without getting into politics … advancing things creates a situation where basically everyone benefits. It’s a win-win for everyone.”

Shaviro assisted with providing a space for the Judea and Samaria Chamber of Commerce and industry in Ariel because he says “I truly believe it can actually lead to true coexistence between us and our neighbors.”

Unfortunately, forces exist that oppose normalization between the two sides, but Palestinian businessman Ashraf Jabari, who co-founded the Chamber of Commerce, is optimistic for the future. He told JNS that “this is the next stage of Palestinian-Israeli economic cooperation. There are countless opportunities for our neighboring communities to create business partnerships, but there are some who don’t want our shared success to be public. Fortunately, market forces are stronger than politics. Our growing relationships will continue to lead the way.”

Israeli businesswoman Tally Zingher, also a panelist during one of the sessions, said she believes the Abraham Accords will provide “business-to-government strategic opportunities for both Palestinian and Arab-Israeli businesspeople” whose goal it is to try to penetrate into markets within the UAE/Bahrain. She thinks there is great potential for advancement in the areas of wastewater treatment and smart cities, along with food, agriculture and health technologies. And she recommended that anyone serious about entering the new markets should read the strategic visions of those countries and see if their companies are compatible.

Mike Humphrey, co-chair of the Integrated Business Roundtable, explained to JNS that in addition to the IPEF, just last week his group hosted its inaugural “Impact Investor Showcase” to introduce thousands of business leaders to “the emergent Israeli-Palestinian economy that is bubbling up in the West Bank.”

He said that during that event, “more than 50 faith-inspired impact investors judged an invitation-only showcase of two early-stage new ventures from Judea and Samaria that competed “Shark Tank-style” for new equity investment of 1 million NIS.”

During the IPEF, it was announced that two companies—a renewable-energy company owned by Israelis and a digital-health company owned by Palestinians—each received NIS 500,000 [nearly $150,000] in investments in order to help kick start their ventures.

Another revelation by Zimmerman during the IPEF was the announcement that the IBR along with the Field Center for Entrepreneurship at Ariel anticipate launching an Israeli-Palestinian business accelerator in early 2021 with the goal of it becoming self-sustaining. Zimmerman played clips introducing the heads of some of the joint Arab/Jewish companies who will be joining the accelerator.

He also shared with the audience how all of this progress in building business ties between Jews and Arabs is possible despite the pandemic.

“COVID-19 has been a blessing for IPEF. That’s not to say that it hasn’t had disastrous effects on countless businesses that we work to support or that it hasn’t wreaked havoc on the very markets that require development. What it does mean is that we’ve taken the challenge of remote work and leveraged it to our advantage … thanks to increased digital access with partners across the globe,” emphasized Zimmerman, “the Israeli Palestinian Economic Forum can now offer exciting outcomes and next steps for our growing community of partners.”