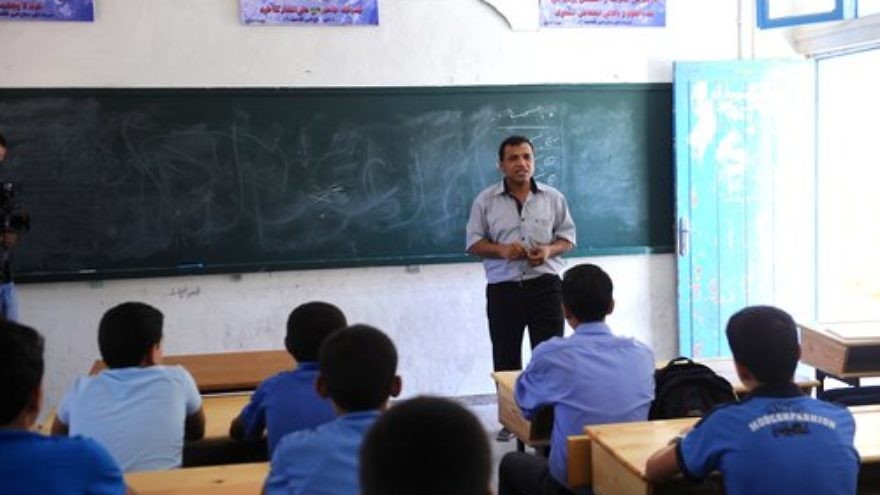 In September 2011, a teacher leads one of the first classes of the new academic year at a Gaza-based U.N. Relief and Works Agency for Palestine Refugees in the Near East (UNRWA). Credit: U.N. Photo/Shareef Sarhan.
Spread the word.
Help JNS grow!
Share now:

The new budget will provide $82 million annually, compared to the previous average annual figure of $135 million, according to the Institute for Monitoring Peace and Cultural Tolerance in School Education (IMPACT-se), a Jerusalem-based nonprofit that monitors educational materials around the world for extremist content.

An additional $15 million was granted through the E.U.’s Food and Resilience Facility for 2022 to help ensure food security following the impact of the Ukraine crisis, according to the report.

In April of last year, the E.U. Parliament condemned UNRWA  for teaching and producing U.N.-branded hate material uncovered by IMPACT-se, and conditioned E.U. funds on changes to the curriculum.

The E.U. commissioner, who announced the reduced funding package, said last year, after the Parliament’s condemnation, that the European Union would fight anti-Semitism and should consider conditioning aid to UNRWA on full adherence to UNESCO standards of peace and tolerance in textbooks.

He reiterated the sentiment in November 2021, when he stated during an international ministerial UNRWA donor conference that “full compliance with UNESCO standards in education material” is “non-negotiable,” and that the European Union would continue to work with UNRWA towards “increased accountability, transparency and consistency with U.N. principles.”