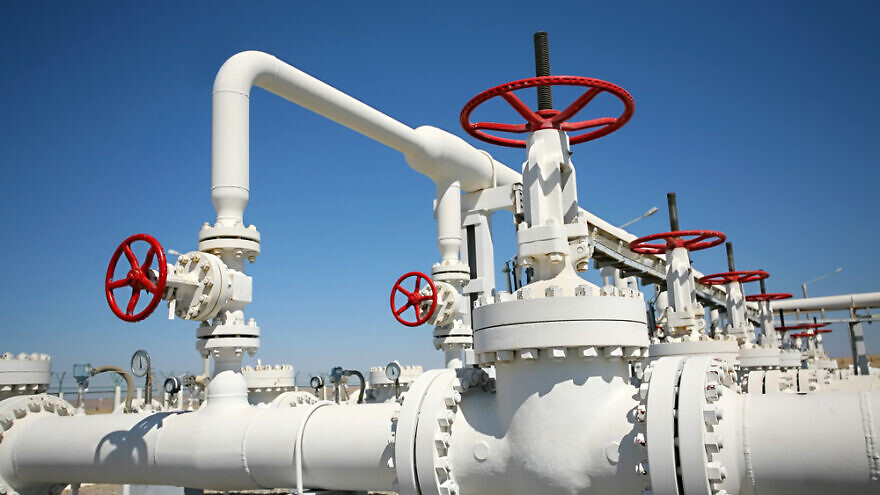 (March 16, 2022 / JNS) Shocked by Russia’s invasion of Ukraine into rethinking its energy policy, the European Union’s executive branch revealed on March 8 the outlines of a plan to wean the E.U. off Russian fossil fuels “well before 2030.” Israeli voices have called for restarting the EastMed pipeline, a project that would help achieve such goals by linking Israel’s extensive offshore natural-gas reserves with Europe.

The Eastern Mediterranean (EastMed ) Pipeline Project is a proposed 1,300-mile pipeline—1,000 miles of which would be undersea—from the Levantine Basin to Europe, making landfall at Cyprus, Greece and Italy. The Trump administration supported the project. The Biden administration did not, freezing the effort via a “non-paper,” or unofficial document, sent to Greece in January by the U.S. State Department, in which it expressed reservations about the pipeline’s environmental impact and economic feasibility. Although the United States was not providing the funding, estimated at $7 billion, its political support was considered essential to go forward.

The Ukraine war creates a new calculus. Prior to the outbreak of hostilities last month, Europe was moving towards still greater reliance on Russia with the recently completed (and soon-to-be-approved) Nord Stream 2 gas pipeline from Russia to Germany. Now, according to its March 8 plan, the E.U. wants to reduce demand for Russian gas by two-thirds before the end of the year.

“I think the war has made it clear to everybody the risks entailed for the West in continuing to depend on Russian gas,” Dore Gold, president of the Jerusalem Center for Public Affairs (JCPA) and former Israeli Ambassador to the United Nations, told JNS.

Gold supports the resumption of the EastMed pipeline, noting in a March 13 article posted to his think tank’s website that the eastern Mediterranean “has immense gas reserves … estimated to be roughly equivalent to 76 years of gas consumption by the E.U.”

‘The long-term interests of your allies’

Under the plan, the gas that would be sent to Europe would come from areas controlled by Israel and Cyprus. A European Commission study of the pipeline’s feasibility found that there are “sufficient volumes [of gas] available, even after … the local needs are met,” and the project would contribute to the “enhancement of energy security, diversifying the supply sources for Europe and to the reduction of the E.U.-wide consumers’ gas bill.”

Creating a wrinkle in this untapped potential is a new development in which Israel has turned away from exploiting its gas reserves in favor of developing renewables. Karine Elharrar, Minister of National Infrastructure, Energy and Water Resources, announced at a renewable energy conference in Eilat on Dec. 15 that she was freezing new offshore licenses for gas exploration in 2022.

“I saw the presentations that the minister of energy was making, and they were very problematic as far as I was concerned,” said Gold, adding that turning away from natural gas to embrace only renewables is “untenable.”

“You have to take into account what are the long-term interests of your allies,” he said.

Gold said he has “a professional commitment to the gas issue,” having been asked when he was director-general of Israel’s ministry of foreign affairs by then-Prime Minister Benjamin Netanyahu to study the issue of Israel’s natural-gas reserves. As such, he appeared before several Knesset committees in 2015 and 2016, at which time he defended Israel’s need to develop those reserves.

“Energy is part of national security. I think this war in Ukraine has demonstrated that more than anything,” he said.

Aykan Erdemir, senior fellow at the Foundation for Defense of Democracies, agreed. “Since the start of the Russian invasion of Ukraine, I think both the United States and the European Union are waking up. And what I mean by that is that there is a greater realization about the interconnectedness of hard security issues with energy issues, and also with the importance of maintaining relations with allies and partners.”

Erdemir, who described the withdrawal of American support from the EastMed pipeline as “short-sighted,” added that “many people in Washington are now thinking differently about what the EastMed energy cooperation might really mean.”

As it stands, said Erdemir, the world is witness to a surreal spectacle where Europe attempts to stop Russia even as it helps fund its war effort. So dependent is it on Russian energy, that it has excluded Russian gas exports from sanctions. With the war sparking price hikes, the amount Europe is contributing to a Russian economy it hopes to cripple has reached record numbers.

“Increasing the supply of gas on the market is the most effective weapon against those who would like to see an increase in the price of gas,” agreed Gold. “If the price of Russian gas goes down because of a new supply situation, the amount of money Russia has to fund its defense budget and its war in Ukraine will also drop. This is the most sensible strategy to pursue.”