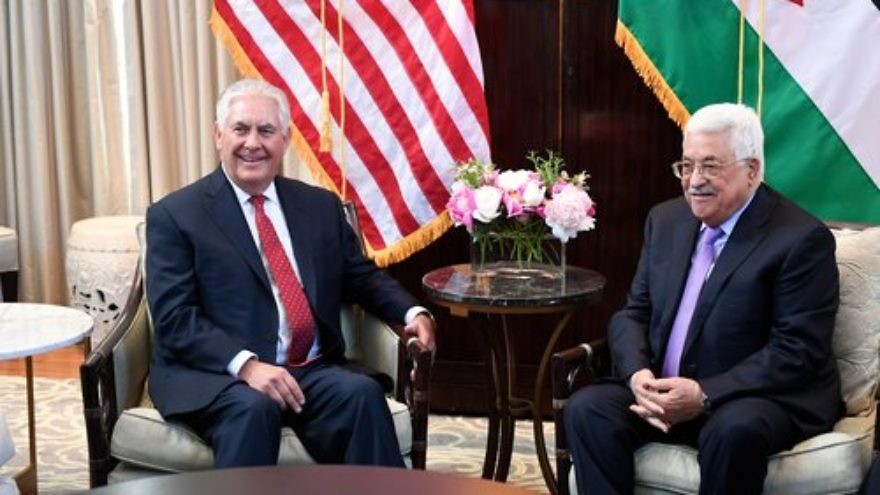 WASHINGTON—Two prominent former Israeli diplomats are charging that the State Department is recycling parts of its old reports in order to whitewash the Palestinian Authority’s (PA) incitement to violence.

The State Department last week released its annual assessment of global terrorism for the year 2016. For the 10th consecutive year, the report used nearly identical language in its defense of the PA.

“The PA has taken significant steps during President [Mahmoud] Abbas’s tenure (2005 to date) to ensure that official institutions in the West Bank under its control do not create or disseminate content that incites violence,” according to the 2016 report. The exact same sentence also appeared in the department’s reports for 2015, 2014 and 2013.

Similar repetition can be found in the section of the reports pertaining to incitement in PA mosques. The 2014 report stated, “The PA maintains control over the content of Friday sermons delivered in over 1800 West Bank mosques to ensure that they do not endorse incitement to violence.”

The identical sentence regarding the mosque sermons also was used in the reports for 2013, 2012 and 2011, and almost identical language was included in the 2010 and 2009 reports.

As a result, two former Israeli diplomats say they suspect U.S. officials are simply copying previous years’ texts rather than providing careful assessments of the PA’s most recent behavior.

Alan Baker, who has served on Israel’s delegation in negotiations with the PA and was deputy director-general of the Israeli Foreign Ministry, told JNS.org that State Department officials seem to be “taking previous reports and copying them, making slight changes where they consider it relevant,” instead of objectively assessing the PA’s most recent behavior.

Baker said not only has the PA failed to take “significant steps” against incitement, but “the opposite is the case—their own actions, statements and publications, naming streets and squares after terrorists, formally paying fees to terrorist families, all point to a distinctive step backwards in violation of Palestinian commitments pursuant to the Oslo Accords.”

The result, Baker said, is that “the Palestinians see it as a license to continue and as support for their struggle. If the State Department closes a blind eye, this is tantamount to giving a green light.”

Another former Israeli diplomat, Lenny Ben-David, agreed that the State Department “does copy from year to year,” and gets away with it because, “Who pays attention?”

Ben-David, who held the second-ranking position in the Embassy of Israel in Washington, D.C., from 1997-2000, told JNS.org he “never put much faith in the State Department’s reports, ever since I found in one of its first human rights reports this sentence: ‘While tribal in nature, Saudi Arabia is basically a democracy.’”

According to Ben-David, the State Department slants its reports about the PA because the department “fears that its own words will be used to buttress congressional efforts to cut aid to the PA; imagine what a truthful report on incitement would do to assist passage of the Taylor Force legislation.”

Ben-David was referring to a pending bill, opposed by the State Department, that would reduce U.S. aid to the PA if it continues paying salaries to imprisoned terrorists and families of dead terrorists. The legislation is named for a former U.S. Army officer who was killed in a Palestinian terror attack in Jaffa last year.

Both Baker and Ben-David said the Trump State Department’s assessment of Palestinian actions, including incitement, hardly differs from that of the Obama administration’s State Department.

“This in itself gives a negative message and is seen as supportive of the Palestinian case,” Baker said.

“I don’t see much difference between the two administrations on the issue of incitement,” echoed Ben-David, who suggested the new report may have been authored in part by Obama administration officials who have not been replaced by the new president.

A review by JNS.org of earlier editions of the State Department’s terrorism reports found additional instances of the same terminology being used year after year. The 2007 and 2008 reports, for example, claimed then-PA Prime Minister Salam Fayyad “has condemned every attack against Israelis” since he took office. Very similar language appeared in 2009 and 2010.

Previously, the reports typically sidestepped the issues of PA incitement and terror condemnations, and instead claimed the PA was cracking down on terrorism. The reports for from 1996-1999 all used this sentence: “The PA, which is responsible for security in Gaza and most major West Bank cities, continued to act against Palestinian perpetrators of violence against Israel.”

A State Department spokesperson told JNS.org, “We stand behind the content of this report. In developing the report, on an annual basis we ask our embassies around the world for reports on the terrorist threat and incidents in their jurisdictions, along with their assessment of the performance of their host government. These submissions are then compiled and reviewed in Washington by the State Department, as well as other U.S. government agencies.”

According to Ben-David, the role of embassies abroad in providing content for the reports is often part of the problem. Many U.S. diplomats in other countries suffer from “chronic client-itis,” meaning they “want to make their ‘client’ look good” and “fear losing access if they make their client look bad,” he said.

One of the most “notorious cases” of this scenario, Ben-David said, was that of Edward Abington, the U.S. consul general in Jerusalem from 1993-1997, who went almost directly “from his diplomatic posting to working as the PA’s foreign agent in Washington.” In 1999, Abington signed a three-year, $2.25 million contract to serve as the PA’s representative.