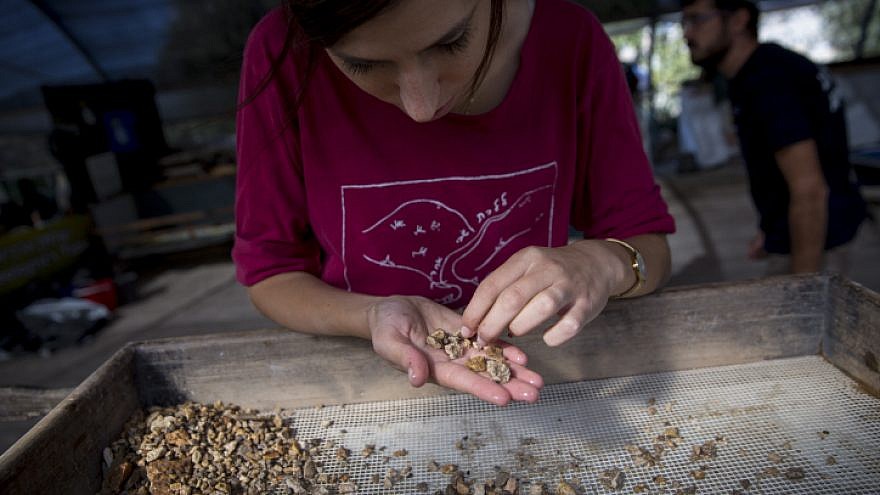 (May 22, 2018 / JNS) Five exceptionally rare ancient coins from among the first-ever minted ones by Jews were discovered on the Temple Mount, evidence of Jewish activity at the disputed site.

The small coins—three in pristine condition and two showing signs of wear—were discovered as part of the Temple Mount Sifting Project, an archaeological initiative started in order to sift thousands of tons of dirt illegally excavated and dumped in the Kidron Valley by the Islamic Waqf in 1999. The Waqf excavations compromised the archaeological integrity of the Temple Mount and sparked outrage in Israel, leading many to suggest that the Waqf was intentionally attempting to eradicate evidence of two Jewish Temples that stood on the Mount for more than 800 years.

The sifting project, which has operated since 2004 in the Emek Tzurim National Park, aims to salvage religious and historical artifacts from the rubble, as well as to educate the public about the veracity of Jewish history on the Mount.

The newly discovered coins bear the letters “YHD,” or Yehud,” the Aramaic name for the biblical kingdom of Judea, and are dated to the end of the fourth century BCE.

According to one of the co-directors of the project, Zachi Dvira, only five other coins of this kind have been found in the 150 years of archaeological digging in ancient Jerusalem sites.

Dvira noted that Jewish pilgrims would bring offerings of first fruits of the season to the Temple around the time of the Shavuot holiday and would often convert their value to silver in the days of the Second Temple.

He also noted that the Temple was a center of commerce and public administration, making it a prime site for finding coins.

“These were the first coins ever minted by Jews,” Dvira said in an interview with Israel’s Ynet news. “They express the people’s return to their land after the Babylonian exile, and their ability to hold and maintain diplomatic ties with the ruling empire—then Persia—similar to our relations with the United States today.”

He noted that the New Israeli Shekel also bears the letters “YHD,” exactly as they appear on the newly unearthed coins.

Though state funding for the project halted in 2017, the Temple Mount Sifting Project is now aiming to bring mobile sifting units of Temple Mount dirt to Israeli schools and communities, enabling children to learn about Jewish history in Jerusalem and to participate in the sifting themselves.

More than half a million artifacts have been pulled from the rubble so far by 200,000-plus participants, including 6,000 ancient coins.

In May 2017, UNESCO adopted a resolution denying Jewish connection to Jerusalem. In October 2016, the international body said the Jewish people have no ties to the Temple Mount.