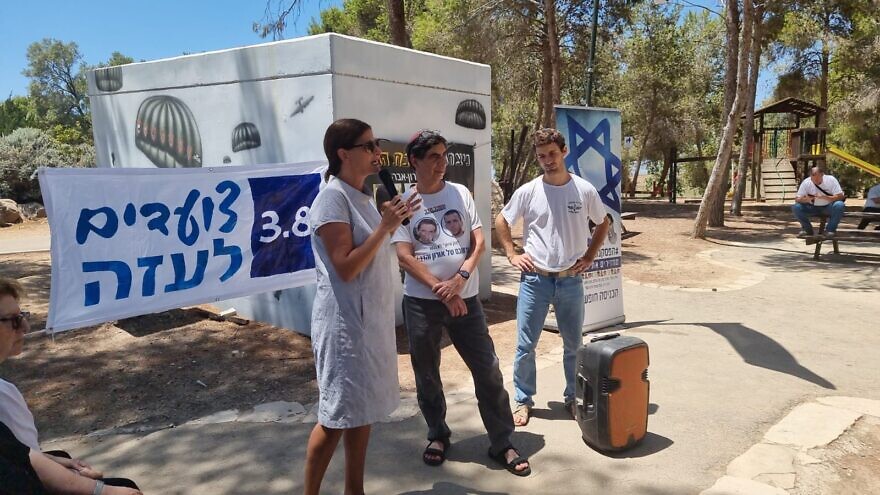 The family of Lt. Hadar Goldin, whose body has been held captive by Hamas in Gaza since 2014, address supporters during a protest march to the Gaza border, July 29, 2022. Source: Twitter.
Spread the word.
Help JNS grow!
Share now:

(August 4, 2022 / JNS) The families of Israeli soldiers whose bodies are being held by Hamas in Gaza, as well as relatives of an Israeli civilian being held hostage by the terror group, began a protest march towards the Gaza border on Wednesday.

Lt. Hadar Goldin and Staff Sgt. Oron Shaul fell during “Operation Protective Edge” in 2014, and their bodies have been held as bargaining chips by the terror group ever since. Avera Mengistu and Hisham al-Sayed are Israeli civilians who were detained by Hamas after crossing into Gaza from Israel voluntarily, in 2014 and 2015, respectively.

The Goldin family initiated the march, which set out from their home in Kfar Saba, north of Tel Aviv, Walla reported. The marchers are calling on the Israeli government to secure the release of Mengistu and al-Sayed, along with their sons’ bodies.

The march is expected to last three days, with marchers due to reach the Gaza-Israel border on Friday, unless security arrangements prevent them from doing so.

On June 30, the Hamas terror group released a video showing Hisham al-Sayed lying in a bed and receiving oxygen.