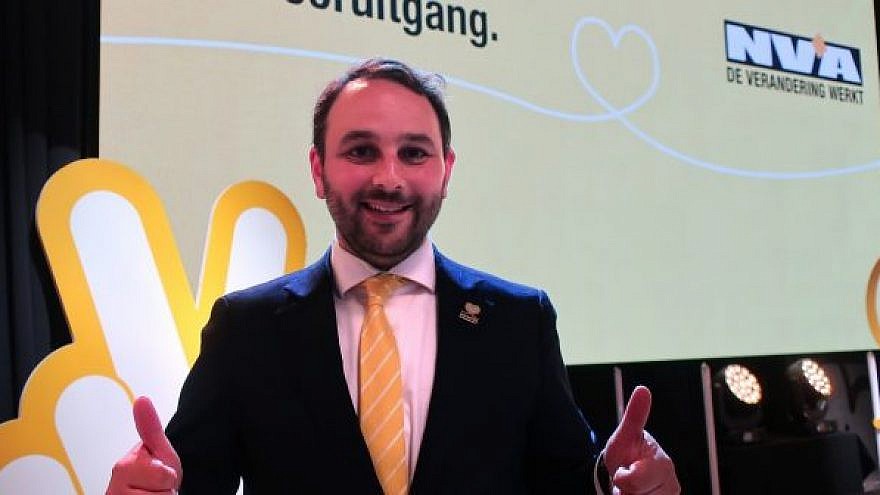 Michael Freilich, former editor-in-chief of a Jewish magazine in Antwerp, was elected to the Belgian federal parliament on May 26, 2019. Credit: EJP.
Spread the word.
Help JNS grow!
Share now:

(May 29, 2019 / EJP) BRUSSELS—38-year-old Michael Freilich, former editor-in-chief of Joods Actueel in Antwerp, a Jewish magazine founded by his grandfather Louis Davids, was elected to a seat in the Belgian parliament on Sunday.

Freilich, who ran on the list of N-VA (New Flemish Alliance), a right-wing Flemish nationalist party, reportedly received nearly 13,000 preferential votes in Antwerp, from both the Jewish and non-Jewish residents of the city.

His election marks the first time that an observant Jew will serve in the Belgian federal parliament.

When he announced his entry into politics earlier this year during a press conference with NV-A leader and Antwerp Mayor Bart De Wever, Freilich explained that the party “fits in with many of my beliefs, which value Enlightenment in a common Judeo-Christian tradition without imposing obligations on others.”

He also explained that he wanted “to do something about things that concern me, including immigration, terrorism and extremism.” Regarding terrorism, he asked, “Is it normal that heavily armed soldiers still have to guard our schools and streets?”

He emphasized that he does not want to be seen as standing up only for the Jewish community.

“I am there for all members of the party and for all Flemish people. I will now fight like a real Flemish Lion,” he said, referring to the country’s symbolism, as shown on its flag.

One of the main areas he wants to address in this regard is immigration.

Although NV-A remained the first party in Flanders, the real winner of Sunday’s election was the extreme-right and separatist Vlaams Belang (Flemish Interest) Party, which finished second with about 20 percent of the vote—a surge of more than 14 percent compared to five years ago. The N-VA remained the largest party in Belgium with around 28 percent of the Flemish vote, a drop of almost 5 percentage points.