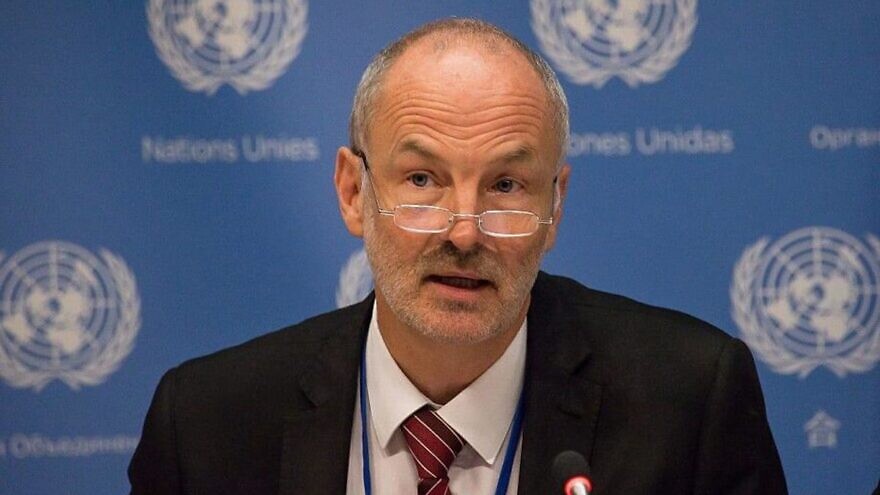 Estonian Ambassador to the United Nations Sven Jürgenson, who served as president of the U.N. Security Council for the month of May 2020. Credit: United Nations via Wikimedia Commons.
Spread the word.
Help JNS grow!
Share now:

(November 9, 2021 / JNS) Five European countries expressed “serious concern” on Monday at Israel’s recent designation of six Palestinian NGOs as terrorist organizations, and said that they will be requesting clarification on the matter, AP reported.

Following a closed United Nations Security Council meeting on the issue, Estonia, France, Ireland, Norway and Albania released a statement saying that the designation has “far-reaching consequences for the organizations in political, legal and financial terms.”

“A thriving civil society and respect for fundamental freedoms are cornerstones of open democracies. Civil society is an essential contributor to good governance, human rights, international law, democratic values and sustainable development across the world, including in Israel and Palestine,” said the statement, read by Estonian Ambassador to the U.N. Sven Jurgenson after the meeting of the UNSC.

The United States also questioned the announcement on Oct. 22 by Israeli Defense Minister Benny Gantz that Addameer, al-Haq, Defense for Children Palestine, the Union of Agricultural Work Committees, Bisan Center for Research and Development and the Union of Palestinian Women Committees would be listed as terrorist organizations for their close ties with the Popular Front for the Liberation of Palestine (PFLP).

“Those organizations were active under the cover of civil society organizations, but in practice belong and constitute an arm of the [PFLP] leadership, the main activity of which is the liberation of Palestine and destruction of Israel,” said Gantz.

The PFLP is considered a terrorist organization by Israel, the United States and the European Union. The six NGOs under discussion have received considerable funding from E.U. member states and the United Nations.

Under Israeli law, the “terrorism” designation allows authorities to close the NGOs’ offices, seize their assets and ban supporting their activities. Despite criticism from the international community, Israel has said that it stands by its decision.