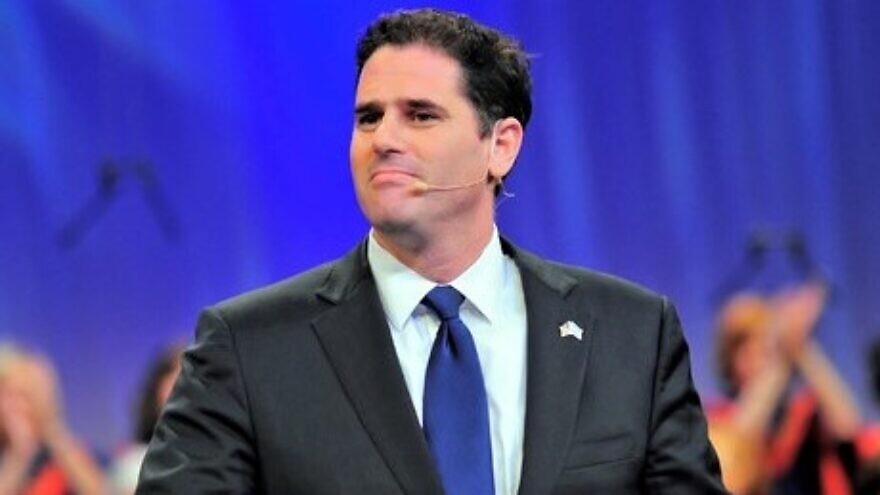 (April 5, 2022 / JNS) In the famous Bünting Clover Map, first published by German pastor, theologian and cartographer Heinrich Bünting in 1581, Jerusalem was at the center of the world.

Today, the capital of the Jewish state represents the spiritual center of the world’s three great monotheistic faiths and remains at the geopolitical center of the wider battle between Western and Islamic cultures. Within Israel, Jerusalem is the seat of Israeli governance. Yet the city—one of the poorest in Israel, due to its large religious and Arab populations—is not known as a financial capital.

Enter Exigent Capital. A boutique Jerusalem-based investment firm founded by three American-born immigrants to Israel, Exigent has stayed mostly under the radar despite two major unicorn investments. These are Insightec, which developed technology to perform non-invasive brain surgery; and NJ-based Cross River Bank, which employs nearly a quarter of its staff in Israel. The company is also a seed investor in High Post Capital, a U.S. private-equity firm founded by Mark Bezos and David Moross.

Exigent is now attempting to place itself on the geopolitical map by adding one of Israel’s most impactful diplomats, former Ambassador to the U.S. Ron Dermer as a senior partner. In that role, Dermer joins co-founders Eliezer Brender and Eric Davis, and Simcha Mann.

With Dermer aboard, Exigent seeks to establish Jerusalem as a financial center and to advance the Abraham Accords through win-win, business-to-business partnerships.

“Israel is the second great technology capital behind Silicon Valley, but not a great financial capital,” Dermer told JNS.

“Israel does not have an image of being a place that can manage money. So the question is: How are you going to create an ecosystem? To start, you need to have a few companies with sophistication,” he said.

Dermer believes that Exigent can be one of the foundational building blocks of that ecosystem.

“That is a contribution that Exigent can make, to change the trajectory of Israel,” said Dermer.

The company believes in value-driven investments that can range across multiple fields. “The mission defines the investment,” said Dermer, while noting the “quality of the team, the track record and grounded ambitions” as reasons for joining. (Dermer is also a non-resident distinguished fellow at the Jewish Institute for National Security of America (JINSA)’s Gemunder Center for Defense and Strategy. He has recently launched the “Diplomatically Incorrect” podcast with JINSA president and CEO Michael Makovsky. The podcast is produced in partnership with JNS.)

One of Dermer’s main roles will be to help open doors to meaningful partnerships in the Gulf states following the signing of the Abraham Accords in 2020. Dermer was a chief architect and negotiator of the accords.

Just like in signing the nation-to-nation normalization agreements, Dermer says that in the Gulf, “governments need to be involved” in larger business deals due to a forward-thinking and top-down structure with a “small group of people at the top of the economic pyramid.”

He is concerned that many Israeli business people don’t understand the accords or how to build upon them.

“The problem is that people see the Gulf as a huge ATM machine. That is not going to be a successful model to follow,” said Dermer. “It is not just about a rate of return by investing in Israel firms. Rather, it is about securing investments that can bring Israeli technology into those countries to help Arab societies. It is very important to get this right.”

‘Able to create some comfort and dialogue’

For Brender, CEO of Exigent, bringing on someone with deep ties and a successful track record Dermer was an obvious choice.

“We’ve already had significant interactions and transactions in the Gulf,” Brender told JNS.

Exigent got started in the region soon after the Abraham Accords were signed. Brender noted that shortly after the signings, both the administrations in the United States and Israel turned over, creating a trust gap with the Arab leaders who had entered the agreements.

According to Brender, “the Emirates and Bahrainis weren’t as comfortable with the new U.S. administration. Here in Israel, new Prime Minister Naftali Bennett, even though he has business experience, he didn’t have much of a profile internationally. Foreign Minister Yair Lapid had most of his experience before politics in public broadcasting.”

Exigent was invited to “fill that void,” said Brender. “We were invited to the Gulf. Our existence became known to a number of critical people in Washington. Meetings were arranged. We met with the leadership of some of the Abraham Accords countries in an informal capacity, and we were able to create some comfort and dialogue.”

“Having someone who is one of the primary architects of Abraham Accords can only help us to build out the Abraham Accords and all the potential they have,” said Brender.

Dermer was able to succeed as a diplomat by “developing deep relationships,” said Brender. “His relationships with ambassadors in Washington are an incredibly valuable resource for companies in Israel who want to grow and become international.”

Those relationships, said Brender, “changed the face of the Middle East.”

“He has a nuanced approach and is very methodical. His strategic thinking is second to none, and his skill set and personality couldn’t be a better fit,” he said.

Most impressive, he said, is that Dermer is “mission-driven and dedicated to the Jewish people.”