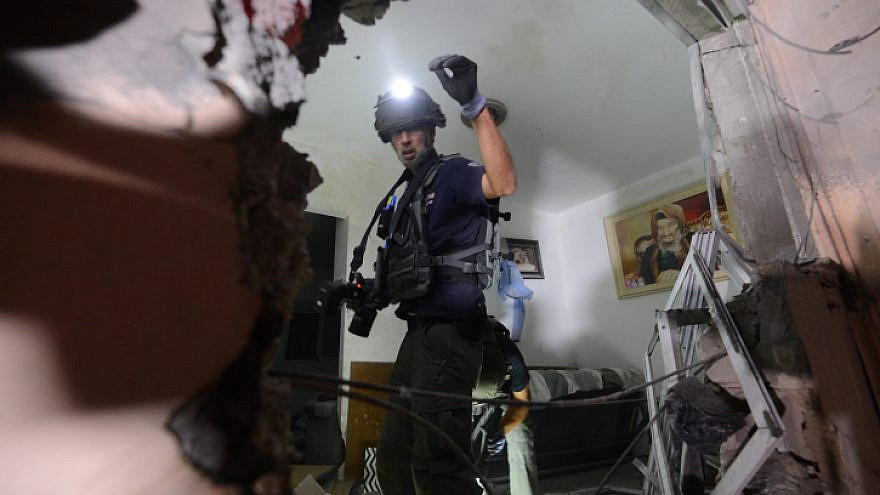 A building in Sderot hit and damaged by a rocket fire from terrorists based in the Gaza Strip, May 19, 2021. Photo by Avi Roccah/Flash90.
Spread the word.
Help JNS grow!
Share now:

(February 14, 2022 / JNS) An Israeli ministerial Committee on Civilian Sector Emergency Readiness approved a plan on Monday by Defense Minister Benny Gantz to upgrade safe-room windows in the southern Israeli city of Sderot, which in the past has suffered frequent rocket fire launched by Hamas and other Palestinian terror groups based in the Gaza Strip.

The committee approved the decision to reinforce the windows to 32 millimeters (1.2 inches). The decision is in line with recommendations by the Israel Defense Forces and the IDF Home Front Command, said Gantz’s office, following a professional review conducted by Home Front Commander Maj. Gen. Uri Gordin.

The review was put into motion following the death of 5-year-old Israeli child Ido Avigail, who was killed by shrapnel that penetrated the window of the safe room he was sheltered in during last May’s “Operation Guardian of the Walls.”

The Israeli Ministry of Defense will allocate NIS 57 million ($17.5 million) towards the project, according to Gantz’s office, adding that the expenditure will be utilized by local residents in coordination with the Defense Ministry, IDF Home Front Command and Sderot Municipality.

“We are continuing the plan to broaden reinforcements of civilian protection components,” Gantz said in a statement. “The last decision joins the upgrade of reinforcements for kindergartens and other maneuvers that we are conducting based on the understanding that a strong, prepared home front will allow the IDF to fully conduct its operational mission.”