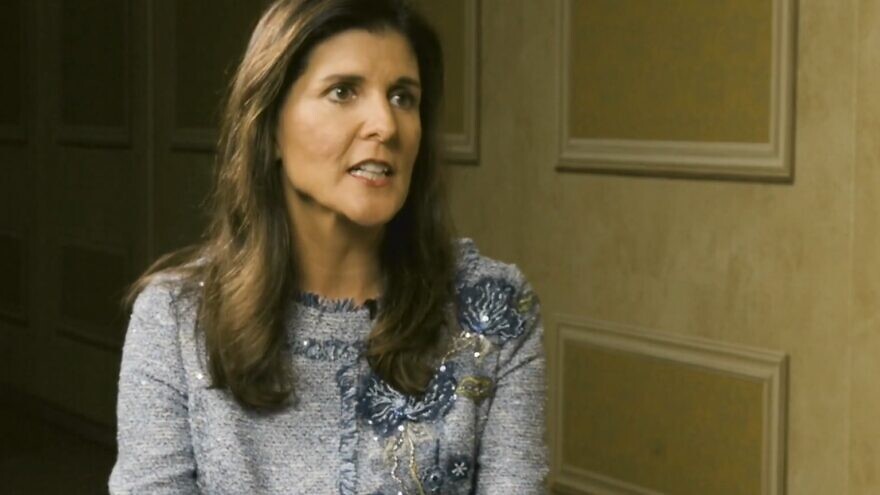 (November 17, 2021 / JNS) Former U.S. Ambassador to the United Nations Nikki Haley believes that the United States and Western powers need to do more to hold China accountable for its ongoing support of Iran, including helping Tehran violate U.S. sanctions.

“There is money flowing to Iran, and if you go and you look, why is it that they’re getting revenues? They’re getting it from China. China is exporting oil from Iran, which is in violation of our sanctions,” Haley told as part of an exclusive interview for “Global Perspectives with Ellie Cohanim” on the sidelines of the Republican Jewish Coalition conference recently in Las Vegas.

“No one is saying anything; no one is calling them out on that,” she said.

“It’s a real problem for us. And I think that we have to hold China accountable. I think what we’re seeing now is China—where they wouldn’t have supported Iran a few years ago—they are very comfortable supporting any enemy to the United States now. We have to start doing something about that.”

Haley’s comments come amid growing tensions and competition between Washington and Beijing in a number of realms, including in the Middle East, where China has made significant inroads as part of its Belt and Road Initiative. On Monday, U.S. President Joe Biden and Chinese President Xi Jinping held a virtual summit where the two sought to sought to ease tensions between the countries. Further, on Wednesday, Israeli President Isaac Herzog also spoke with President Xi on opportunities to enhance ISraeli-Chinese bilateral ties ahead of the 30th anniversary of the establishment of diplomatic relations.

Nevertheless, earlier this year, China and Iran signed a 25-year strategic cooperation agreement involving some $400 billion of Chinese investment in the Islamic Republic in exchange for a steady supply of oil in violation of U.S. sanctions against Tehran.

China, as a member of the P5+1 group (U.S., U.K., France, Russia, plus Germany), was involved in the negotiations of the Joint Comprehensive Plan of Action (JCPOA), more commonly known as the Iran nuclear deal and has been involved in talks to revive the deal and U.S. re-entry, which the Trump administration pulled out of in 2018.

Haley explained how during her tenure, she met with officials from the International Atomic Energy Agency (IAEA), which was in charge of inspections on Iran’s nuclear program and to verify its compliance under the terms of the nuclear deal.

“So what do you inspect? And they said if we see something suspicious, then we give them 45-days’ notice and then we inspect.”

“There was no reason for us to stay in that deal. There were no teeth to it,” she said. “The idea that [U.S. President Joe] Biden is falling all over himself to get back into it is doing nothing but making the world less safe.”

‘We shouldn’t be loosening any strings’

Later this month, members of the P5+1 group (and the United States indirectly) are scheduled to convene in Vienna in the latest round to revive the deal. U.S. Special Envoy for Iran, Robert Malley, arrived in Israel on Sunday for a series of meetings with top Israeli officials ahead of the talks. Israeli officials fear that America will lift all economic sanctions on Iran that were imposed by the Trump administration in exchange for stopping uranium enrichment without addressing other issues such as its ballistic-missile program, support for terrorism and entrenchment in Syria.

According to Ynet news, Israeli officials plan to remind Malley that the $150 billion that was given to Iran last time sanctions were lifted was utilized by the Iranian Revolutionary Guards to fund its regional expansion and nuclear program.

Haley said that the only way to see real progress “is not caving and releasing sanctions on them.”

“If there is any deal to be made with Iran, [it can] only [happen] when you bring in the Arab community, and the Europeans and the Americans, to truly hold Iran accountable,” she said.

“But we shouldn’t be loosening any strings,” she emphasized. “We shouldn’t be giving them any money. And if Biden chooses to give them hundreds of millions of dollars, again, all they’re going to do is funnel that to the Houthis, and to Hezbollah and Hamas. And that’s exactly what we shouldn’t be doing.”