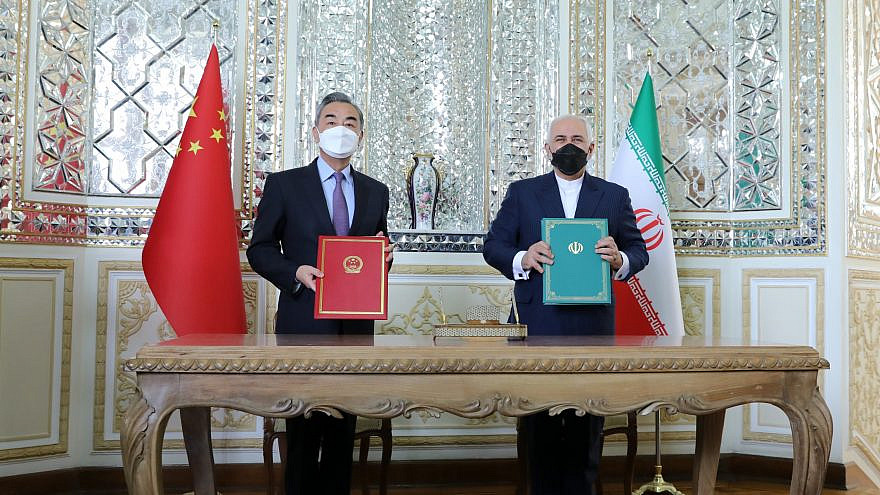 (March 31, 2021 / JNS) The recent announcement by Iran and China of a 25-year strategic cooperation agreement involving some $400 billion of Chinese investment in the Islamic Republic is part of Beijing’s wider struggle against the United States, an Israeli specialist on China’s relationship with the Middle East has told JNS.

The announcement on Dec. 27 of the bilateral agreement mentions investments in the energy, transportation and agricultural sectors, as well as bilateral cooperation on intelligence, military affairs and training, with the latter clauses forming particular sources of concern for Israel.

The United States has maintained biting sanctions on Iran’s economy, particularly against its oil, banking and shipping sectors since former President Donald Trump exited the nuclear deal in May 2018.

China’s central interest in such widescale involvement in Iran stems from its struggle for leadership with the United States, said Roie Yellinek, a non-resident scholar at the Middle East Institute and a research associate at the Begin Sadat Center for Strategic Studies. “If the U.S. pushes Iran away, it is natural that China brings it closer,” he stated.

Currently, when American policy on Iran is under discussion and not entirely clear, “the Chinese have agreed to promote a long-term agreement with the Iranians in order to create facts on the ground and prevent the Americans from doing the same,” said Yellinek.

Beijing has specific interests in Iran as an energy supplier, which is necessary for continued Chinese growth, and Iran’s centrality in the Middle Eastern arena makes it attractive to China, he added.

“Chinese foreign policy is well-versed in the ‘both’ approach—in other words, China knows how to wage a struggle with the U.S. and to conduct trade with the U.S. worth hundreds of billions of dollars. It knows how to threaten Taiwan with invasion and at the same time manage a widespread economic system with it. It knows how to combat the Muslim Uyghurs in China and to safeguard close ties with Muslim countries. It seems that in this case, too, regarding Iran versus Israel and the Sunni states, China will succeed in persisting with ‘both,’ ” explained Yellinek.

The United States and Russia both have cause to be concerned by Chinese activities in the Middle East, he argued. At the same time, both China and Russia know how to manage complex relations, including the ability to trade with one another, while engaging in a zero-sum vaccine competition against one another.

“The U.S. has already indicated that it views China’s growing involvement in the area, as signified by the agreement with Iran, as a threat to its position and as a ‘free rider’—i.e., it enjoys the order and security that the U.S. supplies to the region without paying for it in personnel, money or [giving it] recognition. Russia is showing signs of increasing its presence in the area by building a military base in Sudan, not far from Chinese and American bases in Djibouti,” said Yellinek, describing the competition between superpowers in the region.

Asked to assess China’s longer-term objectives, Yellinek recalled that in 1949, Chinese leader Mao Zedong announced his 100-year plan, which is obtaining global hegemony. “There is a reasonable basis to assume that by 2030, China will continue its economic growth, its growing military strength and in consolidating its position in recognized international institutions and in the parallel institutions it is establishing,” he said.

This trend is likely to also be felt in the Middle Eastern context, which forms a significant component in China’s Belt and Road Initiative, a global infrastructure development strategy.

The area’s oil and gas supplies, coupled with its traditional role of being a zone of struggle between the great powers over hegemony, mean that it is reasonable to assume that it will continue to be important to China in the long-term future, he assessed.

In recent days, the former head of IDF Military Intelligence and the outgoing head of the Institute for National Security Studies in Tel Aviv, Maj. Gen. (ret.) Amos Yadlin, told Ynet news that the clause in the new agreement between Beijing and Moscow calling for joint maneuvers, research and development, and intelligence cooperation is of concern.

Regarding the intelligence cooperation, Yadlin said that “on this issue, China is placing itself in a position that until today it has not been in.”

He added that while China opposes the Iranian weapons program, it’s not helping to stop Iran from developing it. Iran, for its part, is using Chinese power to counteract the pressure being placed on it by the United States, he argued. “The Chinese understand that the Biden administration is not the Trump administration and that they can be more aggressive.”

Brig. Gen. (res.) Assaf Orion, senior director of the Israel-China research program at the INSS and former head of the IDF’s Strategic Division in the Planning Directorate, stated in a recent paper that “Beijing’s assistance to Iran in exiting its isolation and recovering its economy is in opposition to Israel’s objectives.”

He added that the military-technology and intelligence cooperation make the military threat to Israel and others in the region more severe, adding that this trend requires coordination between Israel, the United States and Sunni powers in the region.

The challenge to Israel is complex, he argued, since Beijing is an important economic partner to Israel, yet it is cooperating with a regional power that the main and most severe external threat to the Jewish state.