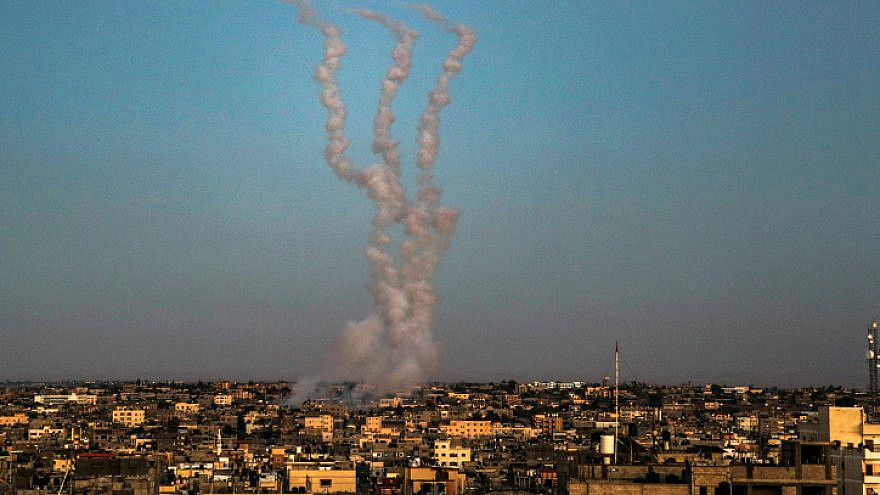 Rockets are launched towards Israel, as seen from Rafah in the southern Gaza Strip, on May 14, 2021. Photo by Abed Rahim Khatib/Flash90.
Republish this article
514 WORDS
Spread the word.
Help JNS grow!
Share now:

(May 18, 2021 / JNS) Israeli Prime Minister Benjamin Netanyahu on Monday updated U.S. President Joe Biden on the progress of Israel’s ongoing military operation against terrorist groups in the Gaza Strip, which the military says have launched more than 3,000 rockets into Israel over the past week.

The two leaders discussed U.S. engagement with Egypt and other partners toward achieving a ceasefire, and Biden reiterated his “firm support” for Israel’s right to defend itself, the White House said in a statement.

The telephone conversation between Biden and Netanyahu comes amid a wider U.S. diplomatic push to bring an end to the most serious round of fighting between Israel and Hamas since “Operation Protective Edge” in the summer of 2014. Ten Israelis have been killed since Hamas began its rocket assault on May 10, with the death toll in Gaza standing on Monday at 212, according to the Gaza Health Ministry. According to the Israel Defense Forces, more than 130 of those killed in Gaza were members of terrorist groups.

U.S. Secretary of State Antony Blinken held talks on Monday with the foreign ministers of Israel, the United Arab Emirates and the European Union regarding U.S. efforts to bring an end to the violence, according to State Department Spokesman Ned Price.

Also on Monday, Netanyahu spoke via telephone with German Chancellor Angela Merkel, who reiterated her “unreserved support” for Israel’s right to defend itself, according to a statement from Netanyahu’s office. The Israeli premier thanked Merkel for her government’s actions against “anti-Semitic elements” in Germany, and emphasized that Hamas is committing a double war crime by firing missiles at Israel’s civilian population, while using civilians in Gaza as human shields.

French President Emmanuel Macron said on Monday that he would work with Egypt and Jordan on a “concrete proposal” for a ceasefire, according to Reuters.

Speaking at a press conference in Paris, Macron said that a process towards a ceasefire must be created “as quickly as possible,” and that he would hold discussions to that end with Egyptian President Abdel Fattah el-Sisi and the king of Jordan in the coming days.

Meanwhile, Jordanian lawmakers on Monday unanimously passed a motion urging the government to expel Israel’s ambassador, in response to the situation in Gaza, according to AFP.

Jordanian Parliament Speaker Abdul Monem Odat announced the move on live television, following a special six-hour parliamentary session on “the situation in Palestine and the crimes committed against them in Jerusalem and Gaza,” according to the report. Legislators also demanded that Jordan’s ambassador to Israel be recalled. Following the passage of the motion, the matter was transferred to the Jordanian government.

Jordanian Prime Minister Bishr Khasawneh, who, according to AFP, was present at the parliamentary session, said that the government in Amman would examine all the options and “rise to the challenge.”

Netanyahu said in a statement on Monday that following an assessment by Israel’s security establishment, the strikes against the terrorist groups in Gaza would continue for the time being.

“We will continue to take whatever action is necessary to restore calm and security to all citizens of Israel,” he said.