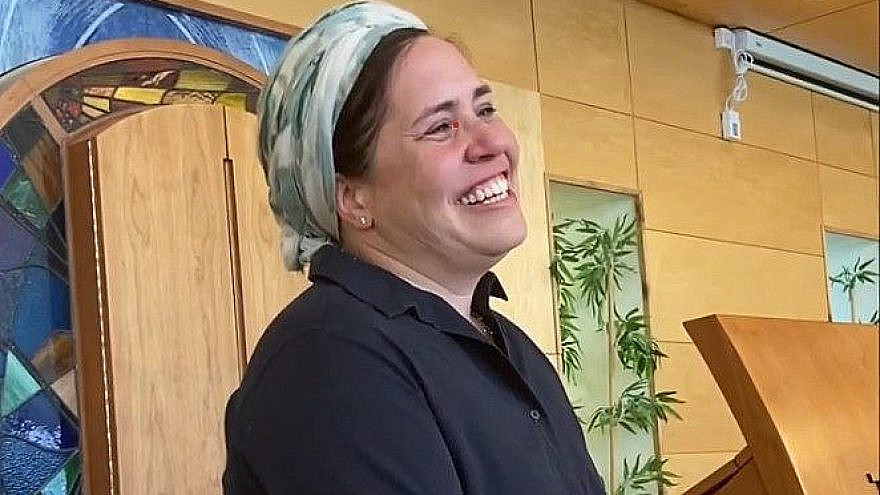 (May 3, 2021 / Jewish Journal) Rabbanit Shira Marili Mirvis made history last month as the first-ever Israeli woman appointed to be the sole rabbinic leader of an Orthodox synagogue, the Shirat Hatamar congregation in Efrat. I talked to Shira about her fascinating journey to this groundbreaking milestone.

From her earliest childhood years growing up in Jerusalem, Shira fell in love with Torah study. She loved the “sacred books” of Judaism, particularly the Talmud and rabbinic commentaries. These books were traditionally the domain of boys and men, but Shira’s father Yitzhak, a deeply pious Moroccan Jew, always encouraged her to study them.

In fact, he insisted that she buy as many sacred books as her heart desired.

“Kids today walk around with their parent’s credit cards, but that wasn’t the norm when I was growing up,” said Shira. “Yet I actually had my father’s credit card, not to go shopping in the mall, but in case I chanced upon another sacred book [that] I wanted. … My father wanted to be sure that I would never be deprived of buying books that would help advance my knowledge and love of Torah.”

In between the celebrations and press interviews surrounding the exciting news of her appointment, Shira took the time to answer my questions, and despite not being with her in person, I could feel the emotions coming through the telephone.

Q: What was it like growing up in Jerusalem as a young girl who loved studying Talmud?

A: I grew up in a religious home in the Kiryat Moshe neighborhood of Jerusalem. Both my parents were born and raised in Morocco, and our home was deeply entrenched in Moroccan-Sephardic traditions. Those traditions included a love for Torah and a deep respect for our Torah sages. We prayed in the synagogue of Hakham Mordechai Eliyahu, who became the Sephardic Chief Rabbi of Israel. My love for Torah study was nurtured in my family from childhood.

Q: So your eventual decision to enroll in the five-year Lindenbaum Women’s Program in Talmud and Halakha was not viewed in your family as a rebellion from your traditionally religious Sephardic-Moroccan upbringing?

A: Quite the contrary. My decision to pursue advanced Talmud study at Lindenbaum is actually a result of my Sephardic-Moroccan upbringing. The love of Torah study was a supreme value in our home, and my decision to study Talmud at the highest level was met with great enthusiasm by both of my parents. In fact, admission to the Lindenbaum program is quite competitive, and the acceptance process lasted one year. I don’t know if I would ever have made it through that year without the constant positive encouragement from my father and mother.

Q: What was your parents’ reaction when you were accepted to the program?

A: They were both thrilled! Especially as a woman who would now be engaged in the intense study of Talmud and Halacha (Jewish Law), they saw me as a link in the chain of continuity with my ancestors. They viewed it as a privilege that their daughter would take the legacy of the pious Moroccan-Sephardic women of previous generations to the next level.

Q: As you are now about to complete this program, how does your father feel as the one who helped fund your love of sacred books from childhood?

A: Unfortunately, my father passed away after my first year at Lindenbaum. Throughout that first year in this demanding program, my father was my greatest source of encouragement. He was constantly telling me to study, study and study some more and that whatever would come of it, he was sure I would be able to do great things to advance Torah and Judaism for the Jewish people.

Symbolically … the last Jewish holiday we spent together was Shavuot, the holiday when we celebrate receiving the Torah at Mount Sinai. My father died the day after Shavuot, and his words of encouragement accompany me and inspire me to this day.

Q: Your historic appointment as Israel’s first-ever female rabbinic leader of an Orthodox synagogue is both exciting and emotional. How did all of this come about?

A: The synagogue in Efrat where my family prays—Shirat Hatamar—is a relatively new community. For the past few years, perhaps because I was studying at Lindenbaum, people in our synagogue started approaching me with serious Halachic questions … I was also asked by the community to deliver sermons on Shabbat. All of this was unofficial, and I was doing it as an individual, not in any official capacity.

Q: So how did it now become official?

A: When Shirat Hatamar was established, we adopted Rabbi Shlomo Riskin as our official Halachic adviser and community mentor. Rabbi Riskin is the founder of the Or Torah Stone Institutions, which includes the Lindenbaum Women’s Talmud & Halakha program where I studied these past five years. Rabbi Riskin has done tremendous work in advancing women’s Torah study and leadership, turning the Lindenbaum program into the women’s equivalent of what men study here in Israel for rabbinic ordination from Israel’s Chief Rabbinate.

Knowing that I was functioning as my synagogue’s halachic authority for the past few years, Rabbi Riskin approached the community a few months ago and said it’s time to make it official, so the process began. … The community engaged in an exploratory process, which included many meetings on Zoom and discussions via WhatsApp chat groups. I stepped away from this process to allow the community to make this decision without influencing them. [Last] week they felt ready to take a vote, and the results were that 83 percent of the community voted in favor of appointing me as the rabbinic leader of the community.

Q: So, is your title the “rabbi” of the synagogue?

A: When people address me in an official title, I go by “Rabbanit Shira.” My title in the synagogue is not “Rabbi” or “Rabbanit” but Manhiga Ruchanit Hilchatit [“Spiritual and Halachic Leader”].

Q: Does the difference in title alter in any way your “rabbinic duties”?

A: My duties in the synagogue are to serve as the sole Halachic authority for our community, teach Torah and rule in Halachic matters, which [were] always the traditional [duties] of a rabbi in halachic Orthodox communities. I will also counsel families and individuals, deliver sermons and teach Torah classes for our community. There are no other rabbis serving in our synagogue; I will be the sole “rabbinic voice” and “spiritual leader” in all religious matters.

Q: How did your mother react to your historic appointment?

A: My mother had a challenging year, as she unfortunately was sick with COVID-19. Thank God, she is fully recovered and doing well, and upon hearing the news of my appointment, she was beaming with pride and joy. Given her health challenges this past year, she was particularly emotional and thankful to see this day in her daughter’s life. She is very supportive of what I am doing.

Q: Ten years ago, you and your husband Shlomo and your kids came to Los Angeles, where you served as emissaries (shlichim) for the Bnei Akiva Religious Zionist Youth Movement for two years. Did your time in the Los Angeles community have any impact on your journey?

A: The two years we spent in Los Angeles had a very deep impact on my life. In Israel, synagogues are often just a place to pray. In Los Angeles, I learned how much more a synagogue can be, as I was both witness to and personal beneficiary of the tremendous support system that the synagogue community provides to one another.

We prayed in Young Israel of Century City, and I remember how the community came together to celebrate joyous occasions and how they supported one another during times of illness or mourning. When my family needed support during some challenging times, I still have vivid memories of every delicious meal lovingly provided to my family from the famous “community meal trains.”

Young Israel of Century City and the Los Angeles Jewish community exposed me to the power of community life. From the welcoming of guests to teaching us how to shop at Ralphs on Pico, the acts of loving-kindness in that community were amazing.

Q: Did you find any support as a woman who loves to study and teach Talmud in the Los Angeles Orthodox community?

A: I will always have gratitude to Young Israel of Century City for giving me the opportunity to teach Torah in the synagogue. Their openness helped open this path for me, and I am eternally grateful for that. Additionally, my day job in Los Angeles was as a Torah Studies teacher to Middle School girls at the Maimonides School. That teaching experience will remain with me forever, and the girls I taught were an inspiration to me. The two years we spent in L.A. were two of the most special years in my life, and everything I did and learned there will most definitely serve me in this position I now officially assume.

Q: As you officially assume this historic position, do you feel like a representative for the women of your generation?

A: I don’t consider myself a representative of any movement or trend, and I am not waving any particular ideological banner as I assume this position. If God gave me the privilege to study and teach Torah to a new generation of students and congregants, it is only by the merit of the righteous and pious women of previous generations, especially those from my Sephardic-Moroccan ancestry. If I represent anyone at all, it is the women who studied Torah with deep faith and piety, raised their families with love and served their communities.

While I recognize the historic significance of my new title and position, I don’t think the essence of what I am doing in any way differs from the women of my ancestry. I’m doing what they did, only in a different capacity [and] in a modern context and setting. I hope to be blessed with the same level of faith and spiritual strength that they had.

During my recent three-month stay in Israel, I was privileged to get to know Rabbanit Shira. In one of our conversations, I asked her if she had any particular women from the past that she considered a role model for her own life. “Rabbanit Farha Sasson,” she said. Farha Sassoon (1859-1936) was a Sephardic Iraqi woman who loved to study Talmud and halachah. She was widely known in her circles as a female Torah scholar and extensively corresponded with some of the most prominent rabbis of her day on halachic subjects.

Rabbi Daniel Bouskila is the director of the Sephardic Educational Center and the rabbi of the Westwood Village Synagogue.