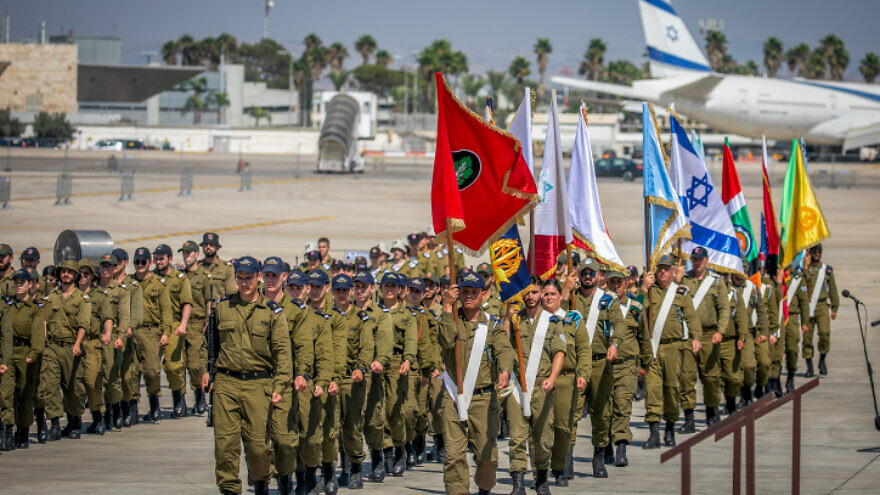 (July 13, 2022 / JNS) Ahead of U.S. President Joe Biden’s arrival on Wednesday for his first visit to Israel as president, to be followed by a visit to Saudi Arabia, senior Israeli officials speaking with reporters on background on Tuesday said that the two countries will formalize what an official called the Jerusalem Declaration on the U.S.-Israel Strategic Partnership.

The declaration, according to the official, will be a framework for the bilateral relationship between Israel and the United States and will include a “regional component,” adding that it is geared “to be a living testimony to the unique quality, health, scope, depth and intimacy of the U.S.-Israeli relationship” and that it “shows in the clearest terms possible” the relationship’s unique nature.

This includes a section in Iran, which the official said makes a clear stand against that country’s aggression in the region and commits to both nations using their national power against the Iranian nuclear threat.

Another section is expected to speak of the importance of American assistance as an “anchor of regional stability” and expresses the need for a follow-up to the Memorandum of Understanding (MoU) to better address emerging threats and new realities in the region.

“It’s a unique testimony to the holistic nature of what we have been doing in the last decades but also sometimes a blueprint for the U.S.-Israel relationship for the next couple of years,” said another official.

The officials also spoke about the Israeli government’s hopes for the effect that Biden’s visit will have to further cooperation between Israel and its Arab neighbors in the wake of the 2020 Abraham Accords. The officials praised the ongoing American leadership in normalizing relations and said that they are encouraged by the commitment demonstrated by the United States in transforming the region.

“We believe that we created a genuine regional partnership, of which the U.S. is an integral part, but of which the states of the region are also equal and responsible members and partners,” noted one of the officials.

The officials said the new partnerships have benefited regional security collaborations and that beyond the new relationships with allies who have signed on to the agreement, the accords have also positively influenced Israel’s longstanding relationship with Egypt and Jordan, allowing for more joint projects and programs to be developed.

According to one of the officials, an announcement is expected to be made on a “new stage of cooperation on technology that will touch on a wide spectrum of fields, and that during the visit, there will also be discussions on accelerating the process to include Israel in the Visa Waiver Program.

‘Iran is continuing to violate its obligations’

The visit will be Biden’s 10th to Israel with the officials noting Biden’s decades of support for the Jewish state, which they said the Israeli government very much recognizes and cherishes.

Besides shared goals, the officials said on the table for discussion are certain diplomatic differences, including Israel’s belief that America’s attempt to re-enter the 2015 nuclear deal (the Joint Comprehensive Plan of Action, or JCPOA) with Iran has run its course, and that even if something is agreed upon, it will be a short-term solution with few benefits, and many strategic and economic drawbacks.

“Iran is continuing to violate its obligations and continues to deceive the international community … ,” said one of the officials. “Our basic position is that Iran is playing for time, and as long as Iran believes that time is on its side, it will not give in and will not give any concessions. This has been our approach for many months now. The time has run out on JCPOA.”

The officials noted that the United States has in recent months taken steps that are more in alignment with what Israel would like to see, including signaling that it was not willing to remove Iran’s Islamic Revolutionary Guard Corps from the U.S. list of Foreign Terrorist Organizations (FTO), which the Iranian regime is demanding in the nuclear negotiations; delivering a resolution against Iran during a meeting of the International Atomic Energy Agency’s board of governors; and recently designating more Iranian entities as FTOs.

Biden’s visit to Saudi Arabia—flying to the city of Jeddah from Tel Aviv—was viewed very positively by the officials, who without going into detail said that gradual steps were being made in regard to Israel’s relationship to the kingdom.

“Let me start by saying that—and this has been the Israeli view for many years—we cannot imagine the full transformation of the Middle East without having normalized relationships between Israel and all of its neighboring countries, including Saudi Arabia,” said one of the officials, adding that Biden traveling from Israel directly to Saudi Arabia “encapsulates a lot of the dynamics that have been evolving over the last months.”

“We are hoping and acting so that the steps that are taken now will only be the beginning, and that this will be the start the process of normalization between the countries,” noted the official. “We want to fully support and also bless the coming together of the American administration and Saudi Arabia. We believe that this is important for the United States, important for Israel and important for the security of the region.”