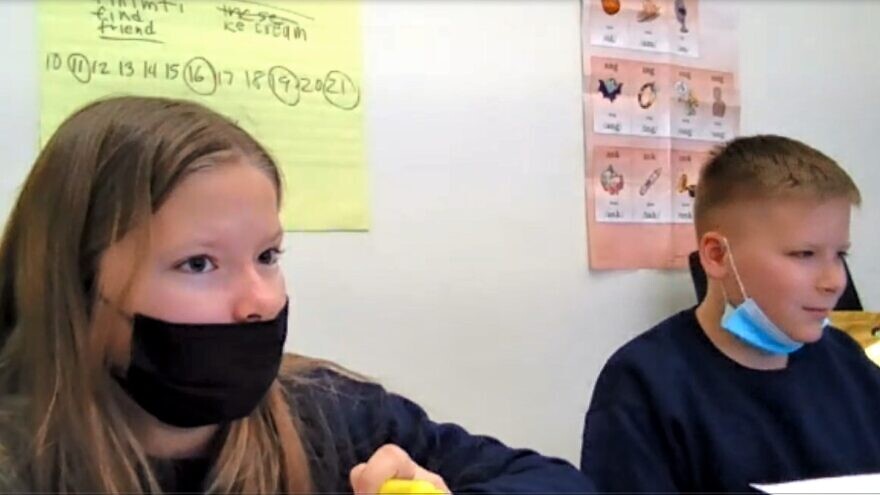 “Once the war started, that first day, we’ve been in touch with our friends 24/7. We have family friends who went to Warsaw, and I knew that my friend there has experience with social media. I also knew that there is absolutely no way they would just accept help from me. So, I thought, what could be of advantage to everybody involved?

“And I realized that at some point, the refugees will be coming in, and we should start promoting our schools because part of our mission is to be a school for global citizens. We wanted to welcome these refugees, regardless of what their background is,” Khaytina tells JNS.

She continued, saying “a friend of mine and I started work on a campaign geared to refugee families. We started doing it in Ukrainian and Russian, then posting in all of those refugee groups, and the demand is unbelievable. It definitely exceeded my expectations. I’m spending most of my time right now fielding questions from families who said that they will be coming to the United States and sharing information about our schools. We received about 30 applications just within the last week once we actually started this campaign.”

Mykola and Stefania Rybchynsky, twins from Kyiv, are enrolled in sixth grade at HLA. They came with their mother to the United States while their father fights for a special unit of the Ukrainian armed forces that is focused on protecting strategic locations such as hospitals and factories. They are in the second week at HLA, which has a dedicated English language-arts teacher who works with Mykola and Stefania to improve their conversational English.

The ELA teacher is one of the special services being offered by Hebrew Public to enroll refugees.

Khaytina explained that “the fact that we have a designated teacher who is focused on English language learning is huge. What we haven’t really encountered before are families that had to flee their homes with nothing. So the school has provided them with uniforms with supplies. We, as Hebrew Public, and our supporters, are contributing for Chromebooks, for basic clothes, for shoes—everything—because they don’t have anything.”

She continued, noting that “their mom cannot really work here, and she’s studying English and trying to find more permanent housing. So, it’s doing the basics for them and then, you know, also providing, you know, social and emotional support to the extent possible.”

HLA has a social worker who also speaks Russian. Each refugee enrollee is being connected with a peer in the classroom who is assigned to be their mentor and to guide them through the school life there. School administrators recently held a discussion about the situation in Ukraine with the sixth-graders to prepare them and have shared resources with the teachers to implement in the classrooms so that students in all grades have at least a basic understanding of what is going on.

‘Each story is a lifetime’

The mothers of the children are also bring provided with whatever social, emotional, financial and educational support is available. Khaytina notes that nearly all of the fathers stayed behind in Ukraine to fight the Russians.

“[The mothers] want to talk. They want to pour out their story, and each story is a lifetime. We’re just lending an ear and listening and being compassionate and doing what we can to support them,” she says.

While the Rybchynsky twins aren’t Jewish, new HLA eighth-grader Mariia Vainshtein is. Along with her mother and sister, she recently arrived from Odessa. Her father stayed back, waiting to be mobilized. Khaytina reports that once the war started, she reached out to every Jewish community center in New York that Hebrew Public works with, and the JCCs, along with UJA-Federation of New York, have been referring refugee families to Hebrew Public.

Ukraine refugees are being accepted everywhere where Hebrew Public and its affiliated schools have seats available. Already, there is a high demand from refugees for a pre-kindergarten class that will open at HLA in the fall. Khaytina says she will be traveling in the next couple of weeks to Los Angeles, where she expects that the affiliated Lashon Academy charter schools will receive more refugees, considering the significant Ukrainian community in that area.

“The mission of the school is to teach Modern Hebrew and nurture kids so that they become productive, global citizens. But as a Jew myself,” says Khaytina, “it is important for me to welcome these refugees to our schools and support them in every single way possible. I sincerely believe that personally, and especially as somebody from Ukraine, it’s my responsibility to do whatever I can.”