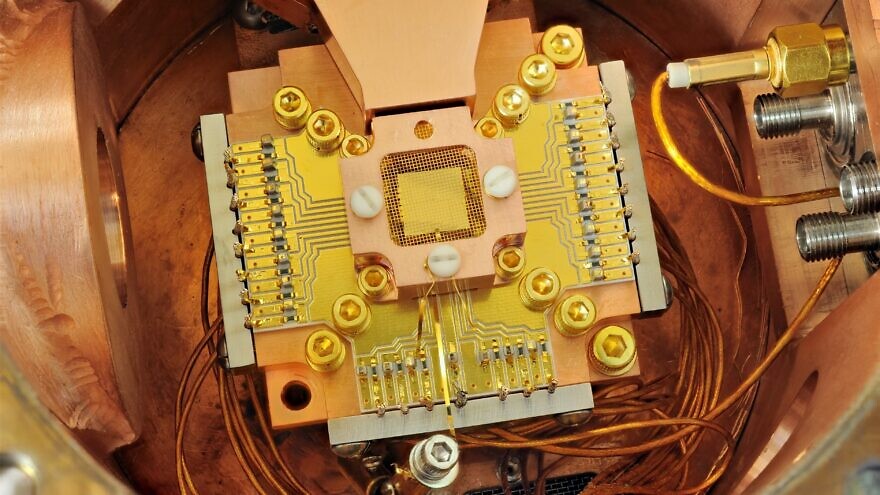 (February 23, 2022 / JNS) In response to what industry observers call the second quantum revolution, Israel announced on Feb. 15 an ambitious goal to build its first quantum computer within a year.

The first quantum revolution led to inventions like the transistor, the laser and the atomic clock, which form today’s information technology. The second is about controlling particles that show quantum effects, like photons and electrons. Although real-world applications are 10 to 30 years off, Israel, which punches above its weight in tech, doesn’t want to be left behind.

“We fully understand that quantum computing has become one of the most technologically important strands for the next decades,” says Aviv Zeevi, who heads the technological Infrastructure Division at the Israel Innovation Authority (IIA).

“We can see it by the amount of investment in this market and by the many countries investing in this technology. We are competing for those investments. We must have our own technology,” he tells JNS.

IIA is working with Israel’s Ministry of Defense’s Directorate of Defense Research & Development (DDR&D) on the quantum computer project on parallel, complementary tracks. The IIA one focuses on getting a quantum computer up and running quickly, even if it depends on foreign technologies. The goal is to have such a computer built in one year, he said—a target that he acknowledges is “ambitious.”

Meanwhile, DDR&D will build a quantum computer from the ground up, “developing from the start, a completely blue-and white-technology,” says Zeevi. He expects that to take five to six years.

Zeevi explains that quantum computing is likely to change the way the world computes optimization problems, which can require high-performance computing beyond the power of current computers. Google announced in 2019 that its quantum computer solved a problem in 200 seconds that would have taken 10,000 years for a classical computer to solve.

He says the technology appears to have profound implications for encryption. Current encryption technology works on the assumption that it’s prohibitively expensive and time-consuming to crack the codes. Quantum computers have the potential to crack them in seconds. “We have to be one step ahead of anything having to do with security problems,” he notes.

While specific applications show how quantum computers already offer a huge advantage (Zeevi mentions radar), widespread real-world applications are 10 years off, he says. Even so, Israel is late to the show.

“It seems like we are a bit behind in anything to do with quantum computing,” he acknowledges. “Many other countries already started investing 20 and 30 years ago.”

‘Israel is a relative late-comer’

Moshe Goldstein, associate professor in the school of physics and astronomy at Tel Aviv University, agrees, telling JNS: “Israel is a relative late-comer. We’re definitely not the first. … But everyone else in the world is not that ahead, so we still have a chance of catching up.”

Goldstein says that while Israel has announced an investment of 200 million shekels—or $62 million—that’s a fraction of what other governments have invested. China leads the world with $10 billion for quantum research. Germany dedicated $3.1 billion and France $2.2 billion. The United States in 2018 set aside $1.2 billion.

Israel plans to start small. Its first quantum computer won’t have a lot of qubits, or quantum bits—the basic unit of memory. “We will not start with 200 qubits because we don’t have enough money, and we don’t have the knowledge for it. We will probably start with a 20-qubit computer and start growing from there,” said Avivi. This would be similar to the quantum computers Google and IBM built a few years ago.

“We are talking about 20 qubits, 100 qubits. Imagine how well your computer would work if it would have only 100 bits,” says Goldstein, noting that really big quantum machines may be decades off.

Nevertheless, “Israel cannot allow itself to fall behind,” he stressed. “It’s well known in these kinds of things that if you don’t have the capability, then foreign governments will be reluctant to sell you what they have. If you do have the capability, then, actually, they will try to sell you what they have to put your own companies out of business.”

He noted many such examples, such as Israel’s satellite industry. Before Israel developed its own, the United States was hesitant to sell it satellites, which it considered “sensitive technology.”

In the case of satellites, Israel hasn’t been put out of business and still launches its own. “They can do some things that others cannot,” he says. “Once we developed the technology, there was good motivation to keep going. Hopefully, the same will happen here.”

Goldstein notes that the challenge is two-fold. One is investing in the technology; the second is investing in the brainpower—“to have Ph.D. students who will enter that field. We definitely need the workforce, and this is actually something I’m telling my students.”

“To be a leader in any technological field, the most important thing is human resources, and especially in Israel, that’s the main advantage we have. In any field where we have advantages, it’s because of the people, not because of anything else here. And in quantum, it’s just the beginning.”