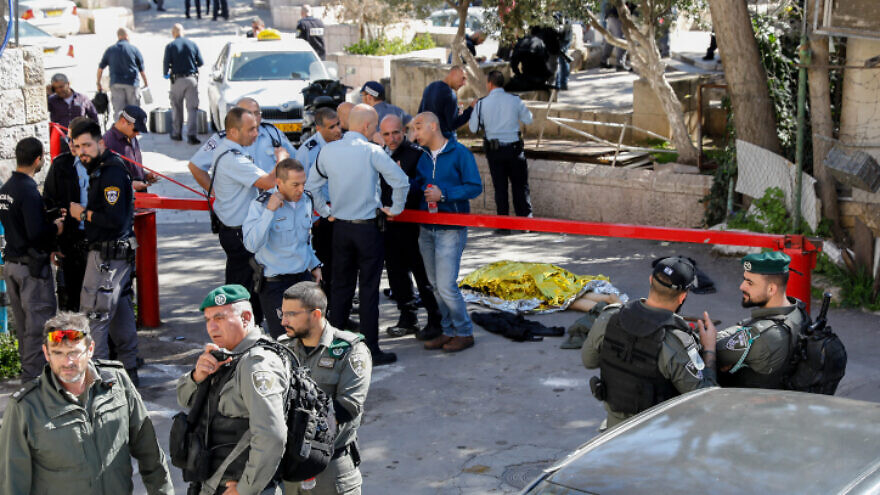 Police at the scene of a shooting attack near Lion's Gate in Jerusalem's Old City, on Feb. 6, 2020. Photo by Olivier Fitoussi/Flash90.
Spread the word.
Help JNS grow!
Share now:

(February 6, 2020 / JNS) An Israeli Border Police officer was lightly wounded in a shooting attack in Jerusalem’s Old City on Thursday, according to police. The assailant, identified by Israeli media as a Haifa resident in his 40s who had recently converted from Christianity to Islam, was killed by police at the scene.

Magen David Adom paramedics reported that the wounded officer was lucid and walking around when they arrived on the scene. He was evacuated to Shaare Zedek Medical Center with bullet wounds to his arm.

“An assailant approached officers stationed near the Lions’ Gate and opened fire at them,” the Israeli Police said in a statement. “Other officers engaged immediately, firing at the assailant and neutralizing him.”

Earlier on Thursday, 14 Israeli soldiers on their way to a swearing-in ceremony at the Western Wall in the Old City were injured, one seriously, when an attacker plowed into them at high speed outside Jerusalem’s First Station. The suspect drove off before the troops could stop him. The car was later tracked down to the enclave of Beit Jala outside Bethlehem, but the driver remains at large.

On Wednesday night, two Palestinians, including a Palestinian Authority policeman, were killed confronting Israeli troops in Jenin. According to Palestinian WAFA news agency WAFA, a 19-year-old rioter and a P.A. police sergeant were killed in the incident, and seven others wounded.

The Israeli soldiers were on site to demolish the home of terrorist Ahmed Kunbe, who is responsible for the death of Rabbi Raziel Shevach in September 2018. According to an Israel Defense Forces’ spokesperson, snipers were firing at the troops guarding the demolition unit at the time of the incident.

Earlier on Wednesday, a 17-year-old Palestinian was shot and killed in Hebron by IDF forces as he and several other rioters hurled firebombs at them.

“During a violent riot that took place in the city of Hebron, IDF troops identified a Palestinian lobbing petrol bombs at them and opened fire in response to remove the threat,” the Israeli military said in a statement. “Violent riots have been going on for a few days in Hebron next to the city’s Jewish settlement. Dozens of Palestinians hurled rocks, set tires on fires and lobbed petrol bombs at IDF and security forces.”

The soldiers had only opened fire when they felt their lives to be in immediate danger, the statement emphasized.