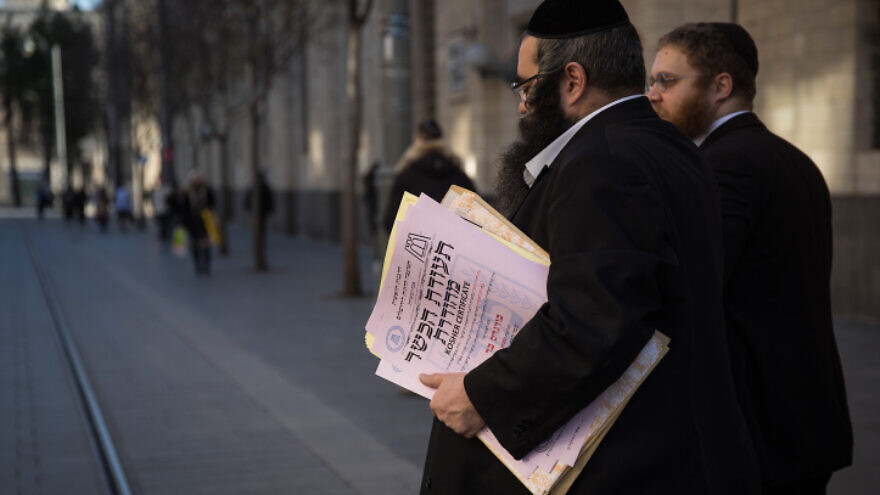 Representatives of the Chief Rabbinate of Israel deliver a kashrut certificate to a local restaurant, in central Jerusalem, on Dec. 31, 2019. Photo by Hadas Parush/Flash90.
Republish this article
596 WORDS
Spread the word.
Help JNS grow!
Share now:

(July 21, 2021 / Israel Hayom) Israel’s Chief Rabbinate announced on Tuesday that it plans to fight a reform seeking to strip it of its absolute authority to award businesses kashrut certificates.

The reform, announced by Israeli Religious Services Minister Matan Kahana earlier in the day, aims to make the Chief Rabbinate a regulator of independent organizations able to provide kashrut supervisory services, rather than the body controlling the process as a whole.

The goal of the measure is to improve the level of services provided as well as create competition in the field, often criticized by small businesses as being corrupt.

A growing number of small businesses have opted to divest from the Chief Rabbinate’s kashrut supervisory services in recent years, claiming that apart from the exorbitant fees it mandates for its services, some of the demands it presents are not rooted in Jewish law, but rather the whims of specific supervisors.

In 2018, the Modern Orthodox Tzohar organization presented alternative kashrut supervisory services, but that has not been enough to break the Chief Rabbinate’s monopoly.

Kahana said the proposed reform would also give businesses the freedom to choose which kashrut supervisory services they wished to employ, which will eventually mean lower prices for consumers.

He further argued that the plan would bolster the rabbinate, since under it the rabbinate would be responsible for determining national standards and overseeing the various independent authorities of kashrut.

The minister admitted that the top rabbis are “not very enthusiastic” about the reforms, but said his ministry will work closely with them to ensure the plan is executed properly.

Past attempts to strip the rabbinate of its kashrut monopoly have failed.

The issue of the alternative kosher certificate also opens up a particularly dramatic possibility: Providing kashrut certificates to businesses that operate over the weekend and on Shabbat.

“Under certain conditions, businesses that are open on Saturday could be certified as kosher,” said Kahana. “Technically this is possible. If the rabbinate doesn’t allow it and there are three city rabbis who are authorized on the matter and know what criteria must be met, to give a kosher certificate to a restaurant that meets all other conditions, it will happen.”

The Chief Rabbinate immediately denounced the plan, calling it “dangerous” and saying it “would destroy kashrut in Israel.”

“This is part of a general trend of a war against religious services, the ultimate goal of which is to abolish the Jewish identity of the State of Israel,” the rabbinate said in a statement.

“This will increase trust in the rabbinate and to allow for transparent, high-quality and better kosher oversight in Israel.”