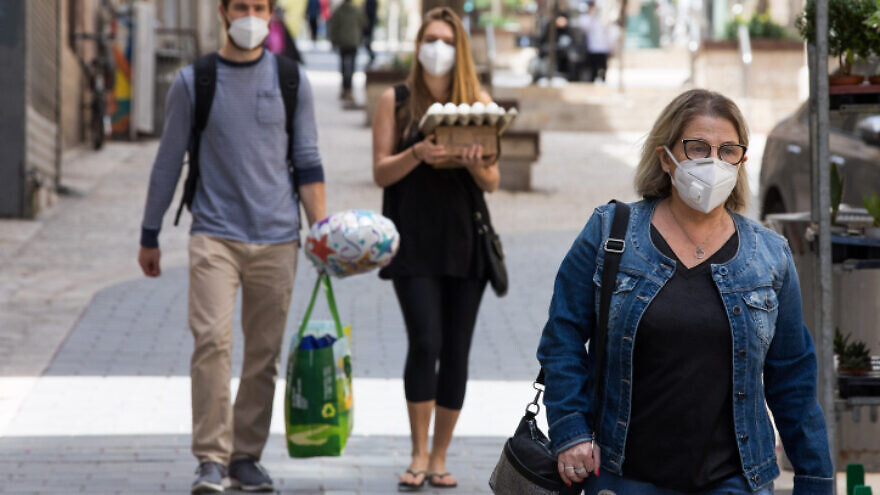 (April 16, 2020 / JNS) Israel awoke on Thursday to the lifting of a nationwide curfew imposed for the end of the Passover holiday, while the government is reportedly considering additional easing of general lockdown directives.

The national coronavirus death toll stood at 140 as of Thursday morning, while 174 people remain in serious condition, 140 of whom are intubated, according to Israel’s Health Ministry. As of Thursday morning, 9,827 Israelis had COVID-19, the disease caused by the SARS-CoV-2 virus, with 2,624 having fully recovered.

As of 5 a.m, inter-city travel was again permitted, subject to general lockdown restrictions, and limited public transportation was reinstituted. The full closure had been in place since Tuesday at 5 p.m.

Though bakeries throughout Israel are traditionally swarmed the night after Passover by citizens eager for a taste of the leavened delicacies eschewed during the holiday, authorities forbade them to reopen before 2 a.m. to reduce public gathering.

Israel’s Cabinet was scheduled to discuss on Thursday afternoon steps in a gradual return to a degree of normalcy, though officials emphasized that it would be a long time before the country returned to full, pre-pandemic normalcy.

According to Israeli media reports, the country’s health and finance ministries have been at odds over the order and the pace of steps to ease lockdown restrictions.

The Finance Ministry is pushing for the reopening of the high-tech, finance and industrial sectors, as well as small businesses, starting Sunday or Monday, whereas the Health Ministry argues that such a move is premature, saying the next step should be to increase the number of employees allowed to work in an office at the same time, according to Channel 12.

The Health Ministry has argued that Israelis should only be allowed to return to regular daily life when new infections fall to between 30 and 50 per day, as otherwise all the sacrifices made to date will be wasted. On Wednesday, 455 new cases were reported.

While some initial reports spoke of a possible return to school for millions of Israeli children from preschool through high school, the move was apparently deemed unfeasible at this time.

Israeli Defense Minister Naftali Bennett on Wednesday night pushed for Israel to begin reopening the industrial, trade and service sectors, saying maintaining the status quo will “cause critical harm to Israel and its citizens.”

In the meantime, Israeli police handed out approximately 3,000 fines to Israelis for flouting social-distancing regulations during the end-of-Passover curfew, up from the 2,000 they handed out for the same infractions on the eve of Passover last week, during which the government also imposed a full lockdown.

Additional lockdowns are being considered from Israeli Memorial Day through Independence Day, the evening of April 27 through April 29, to prevent large gatherings.