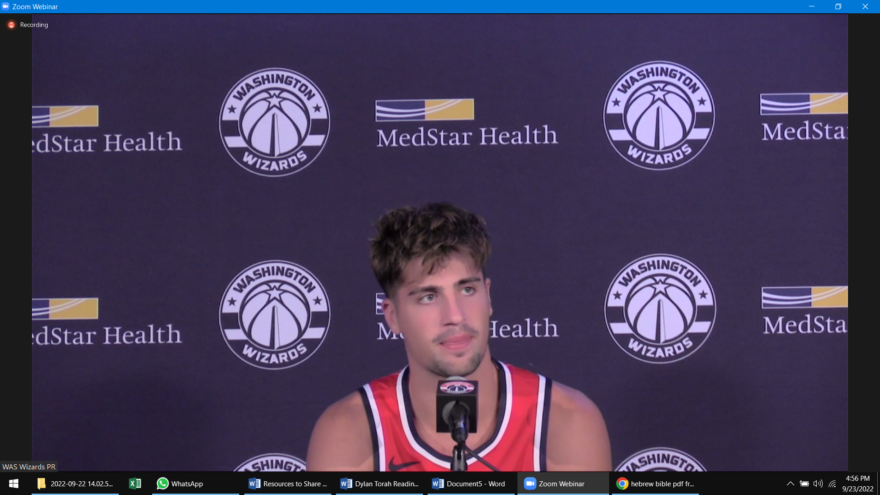 (September 29, 2022 / JNS) Listening to Deni Avdija answer questions at Washington Wizards Media Day last week provided a reminder of just how much the likable 21-year-old Israeli forward has accomplished—and endured—in his two seasons in the NBA. And he has a lot to look forward to.

The only Israeli in the NBA is about to kick off season 3 with the Wizards, but first he has to get through a tough four-day training camp, fly to Japan for two preseason games against the Golden State Warriors, overcome a groin injury, and play two additional preseason games on the road—all before the regular season kicks off on Oct. 19.

Welcome to the life of a young NBA player who also found time to play for the Israel national team this summer, hit the beach, and maintain his good sense of humor.

“The off-season was great. I had time to work on my game and body,” said Avdija, referring to his experience playing in the EuroBasket 2022 tournament while also visiting with family and friends at the beach.

“I got lots of experience in the off-season and I enjoyed the experience playing on the national team. We all enjoyed it,” he said while admitting, “I thought we’d advance higher. Unfortunately, we came up short.”

Israel won two close games against Finland and the Netherlands but lost to Poland, Serbia and the Czech Republic.

Avdija got off to a slow start as he tested positive for COVID-19 and wasn’t able to fly with his team to Georgia for three exhibition games before the tournament. Yet the 6’9” (2.06 meter) tall small forward still managed to lead Israel in points, rebounds and assists at EuroBasket.

“I think FIBA competition simulates as much stress and pressure as you can put on a player outside the NBA playoffs. We want all of our players to compete for their countries,” he said.

After seeing Avdija play in Prague, Sheppard said the leadership experience provided him with more confidence than the Wizards have seen from him yet.

“It was nice to see Tommy come and show his support,” Avdija added.

Avdija had a great summer in Israel with family and friends. “I was chilling, drinking some good wine, enjoying the sun,” he playfully told the media. “You don’t need more than that!”

He then offered, “I trained on the beach too.” Avdija explained that he devoted time this summer to gaining confidence in his shot, and to “playing more physical.”

At the media session, Avdija reflected on his expectations of himself. “I want to improve my shots, the pick and roll, creating for others, being more confident and knowing where to be on the court.”

Avdija said he is excited to play with new and returning Wizards teammates. “I feel like these are great guys and the chemistry can be great.”

Sheppard noted that 14 of the 16 rostered players worked out together in Los Angeles this summer. The only two who didn’t join the squad were Avdija and Kristaps Porzingis, who were playing for their national teams—Israel and Latvia, respectively.

Avdija and the Wizards will soon be off to Japan for the two exhibition games, the NBA Japan Games 2022, at Saitama Super Arena outside Tokyo on Sept. 30 and Oct. 2.

It will mark the Wizards’ first trip to Japan and the league’s 15th and 16th games in the country.

“We are so honored to represent the NBA and the wonderful game of basketball in front of an audience of Japanese fans,” said Ted Leonsis, founder and CEO of Monumental Sports & Entertainment, which owns the Washington Wizards as well as the NHL‘s Washington Capitals.

“We are particularly excited to watch [Wizards forward] Rui Hachimura play in front of his fellow Japanese citizens,” Leonsis said.

Hachimura said he was excited to bring Wizards basketball to Japan.

“I cannot wait to see the arena filled with fans getting to see NBA basketball in person,” he said.

Avdija is clearly excited about the team’s trip to Japan. He recently posted a playful video asking teammates, “Which Wizards player would you want to sit next to on the flight to Japan?”

It is unclear whether he will actually play in these games as he is nursing the groin injury he suffered during last month’s EuroBasket tournament. “I am still dealing with a little bit of [groin] discomfort,” he reported at Media Day.

But Avdija, who made a complete recovery following a fractured right ankle suffered in a game in April 2021, is confident that he will be playing soon. “The doctor and the trainers will do their best to get me healthy and on the court ASAP. I trust them!” he said.