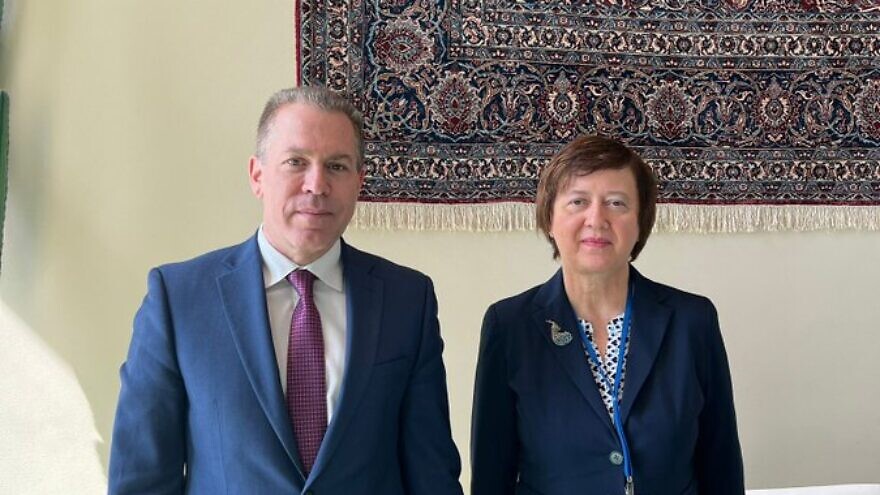 (March 17, 2022 / Israel Hayom) Israeli Ambassador to the United Nations Gilad Erdan on Tuesday asked the members of the United Nations Security Council to condemn Hezbollah’s recent attempts to launch drones into Israeli territory and turn Lebanon into a terrorist base.

In an urgent letter addressed to the Security Council ahead of a special discussion Wednesday on the implementation of U.N. Resolution 1701, Erdan wrote: “Recently, drones were launched from UNIFIL’s area of activity in southern Lebanon, which managed to penetrate Israeli airspace. Israel harshly condemns Hezbollah’s provocative attempts to violate its sovereignty through the blatant disregard of U.N. Security Council resolutions. Israel will not tolerate any infringement of its sovereignty and will take every step necessary to defend its citizens.

“We demand that the Lebanese government, which is responsible for activities emanating from Lebanese territory, fulfill its duties and prevent all hostile acts from its territory. Lebanon must not allow Hezbollah to negatively influence regional security and stability.”

Erdan also met on Tuesday with U.N. Special Coordinator for Lebanon Joanna Wronecka. After presenting her with information regarding Hezbollah’s growing strength as a proxy of Iran, with an emphasis on the terrorist organization’s precision missile project, Erdan said that “Hezbollah continues to undermine regional stability and to prioritize the Iranian interest over the Lebanese interest.”

The Israeli ambassador also requested of Wronecka that the U.N.’s reports accurately reflect the dire situation in south Lebanon, namely the scope of missiles and rockets embedded in civilian homes, that could ignite a broad regional conflagration, and that its reports also include the figures and information provided by the Israel Defense Forces.

“Allow me to be clear on this: If Hezbollah continues with these activities, Israel will do whatever is necessary to protect the safety and security of its citizens, meaning that Hezbollah could precipitate a catastrophe for Lebanon,” Erdan told Wronecka,