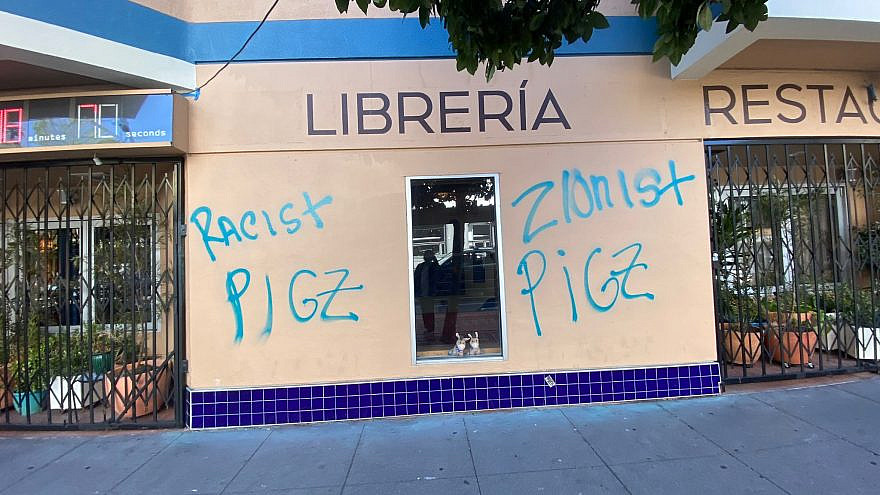 (June 9, 2021 / JNS) A popular Jewish-owned bookshop, cafe and event space in San Francisco was vandalized on Sunday with anti-Semitic and pro-Palestinian graffiti.

Manny’s in the Mission District was tagged with blue paint and the phrases “Racist pigz,” “Zionist pigz” and “Free Palestine.”

“Targeting Jewish businesses is straight-up anti-Semitic,” California State Sen. Scott Wiener wrote in a series of Twitter posts that included photos of the graffiti and past anti-Semitic vandalism of the store. “We must speak out and condemn this hate. San Francisco isn’t immune to anti-Semitism. We must push back.”

Manny’s has faced graffiti vandalism “at least a dozen times” since its opening in 2018, according to the cafe’s spokesperson David Perry, who added that “this is anti-Semitism to the core.”

Weiner, who is Jewish, said “just a few weeks ago,” someone wrote what appeared to be “Death to Israel” outside of the cafe. In September, graffiti that said “F**K YOU” was found outside of the store.

Owner Manny Yekutiel emigrated from Israel and has spoken publicly about his belief in Israel’s right to exist while also denouncing many of the actions of the Israeli government against the Palestinians, according to a local publication.

Hillary Ronen, from the San Francisco Board of Supervisors, who represents the Mission District, said it is “outrageous [that Yekutiel] has to go through the constant vandalization of his building … it’s not easy or cheap to constantly cover up vandalism.”

She said he is “always willing and ready to engage in tough dialogue” and called on the owner’s adversaries to “do what he’s willing to do—sit down and have a debate.”