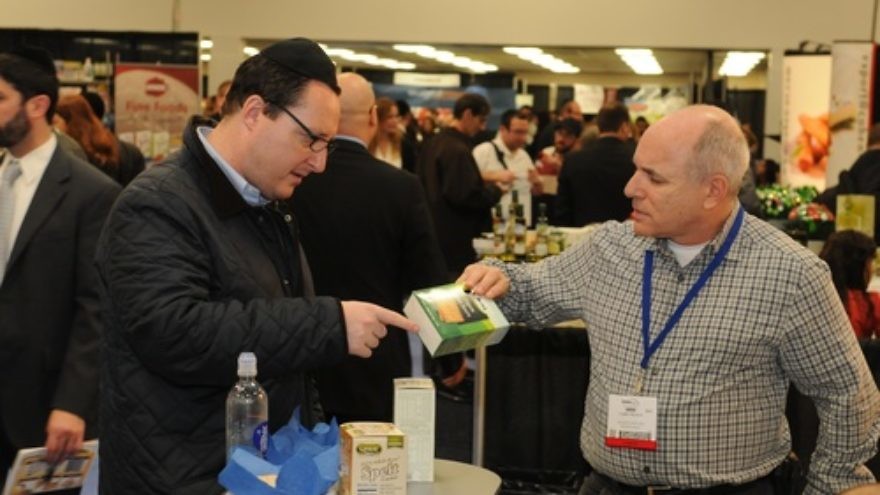 The growing demand for natural, organic, vegetarian, fiber, and gluten-free alternatives among kosher consumers was apparent at Kosherfest 2013, the annual trade show of the kosher food industry, from Oct. 29-30 at the Meadowlands Exposition Center in Secaucus, NJ.

Companies big and small are in with the new trend. As Manischewitz Assistant Brand Manager Avital Pessar tells JNS.org, “We are constantly looking to find ways to be innovative with modern health trends.” Indeed, the company’s new “L’Chaim, To Life” insignia applies to its natural products, for example, broths without MSG. Its “Season” brand indicates that the fish used in a product are sustainably harvested and wild caught.

Nutritionist Reesa Sokoloff, who works with Sherrie’s Specialties, spoke to the increasing need for the gluten-free, dairy-free, and sugar-free macaroons and biscotti her company offers.

“Younger people eating gluten-free foods are heading for diabetes,” she says, explaining that gluten-free products typically use high-starch flours like potato starch and tapioca (Sherrie’s uses nut flour or no flour at all). The company’s goal, says Sokoloff, is “to put forth healthy and delicious food and to fill a void that is increasing in size—whether a diabetic that needs to eat gluten free or a gluten free that has walked themselves into diabetes.”

“It looks, tastes, and bakes just like sugar, and it is the only natural sweetener that is safe for diabetics,” Sokoloff says.

One of several companies that have recently received kosher certification after offering gluten-free and other healthy products to a broader market is Kinnikinnick Foods of Edmonton, Alberta, Canada. The firm’s owner, Dani Wiebe, explains why her company— which manufactures products free of gluten, dairy, meat, and peanuts—decided to get its Orthodox Union (OU) kosher parve certification in December 2011. “We had been getting lots of inquiries for a number of years, and because we take allergy restrictions seriously, there was no reason not to take into account other dietary restrictions as well,” she says.

Kinnikinnick’s has won awards for the taste and healthiness of its gluten-free bread, which, notes Wiebe, is different from other gluten-free breads because it provides five grams of fiber in every two slices of bread, is enriched with five essential nutrients, and has loaves the same size as regular bread. Wiebe says her company “is the only gluten-free company to stay true to the traditional boil-and-bake method” of making bagels.

Another aspect of healthy eating has to do with the health value of fiber. David Holzer of Fiber Gourmet, which exhibits for the American Diabetes Association, put forward his first fiber-based product in 2008 and says of his pasta and crackers, “Half the product is fiber, but it tastes like you’re eating regular food.” Holzer adds that the Resistant Starch Type 4 he uses, which has no calories, is digested in the distal rather than the proximal colon, which may offer protection against colon cancer and reduce bloating for people who have difficulty digesting fiber.

Vegetarian alternatives were also represented at Kosherfest. A newcomer to the kosher market, Ryan Krause of Atlantic Natural Foods from Nashville, NC, showcased his company’s Meatless Select brand, which includes a five-bean chili, fishless tuna, and vegetarian taco filling, among other products.

“We set out to create products without artificial colors, flavors, and preservatives,” he says. “We also wanted to create products that not only vegetarians would enjoy but also a person who eats meat and wants to reduce red meat from their diet.”

Gezunt Gourmet, which uses natural ingredients, is working on organic certification, says owner Louis Agrosa. One of his products at Kosherfest was a non-dairy lasagna that tastes like typical vegetarian lasagna, but uses tofuti instead of cheese. In his business, he avoids cheaper alternatives like emulsified tomato paste, and starts with whole tomatoes. “If you start with good quality ingredients, you don’t have to put in a lot of additives,” Agrosa says.

Schulz Catering’s “Gourmet to Go” brand of self-heating products, all non-GMO (genetically modified organisms) and without preservatives, include lots of veggie and vegan foods that are shelf stable for three years. “It was very important for us to go with the vegan and vegetarian market in order to meet the new culinary trend of less carbs and less gluten,” Schulz’s Eyal Ben David says.

Although people do not necessarily think of preserves, marmalades, and chutneys as healthy foods, the ones offered by Joe Hanglin of Blake Hill Preserves from Grafton, Vt., are certainly healthier. “We don’t use thickeners, additives, citric acid, or commercial pectins,” Hanglin says, adding that he uses top-quality fruit and berries as well as more fruit than ordinary jams.

Another “healthier” alternative comes from Gelato Giuliana, whose owner, Giuliana Maravalle, explains that gelato has much less butterfat than ice cream, particularly the high-end ones.

Several companies offered unusual herbal products, vitamins, and nutrient-rich “superfoods.” Galilee Tisanes, an Israeli family business, produces a range of herbal teas that support healthy function for a variety of health conditions, including diabetes, high cholesterol and blood pressure, obesity allergies, asthma, and constipation. It also markets Nufar fibers, which use quinoa for protein. The herbs are grown on the family farm in the Upper Galilee, and according to the company’s literature, the farm “uses 100 percent natural production, free of artificial flavors, colorants, essential oils, preservatives or chemical and GMO ingredients.”

Bluebonnet Nutrition Company, which joined the kosher market about six years ago, offers a variety of multivitamins, amino acids, protein powders, and herbs.

Earth Circle Organics offers superfoods from all over the world, such as goji berries from Tibet. Its Chlorella powder can be added to smoothies to take mercury and metal out of our bodies, and its Spirulina powder “takes out the fogginess,” says Kerry Romano Zall, who adds, “Our goal is to make it affordable for people to eat this way.”

Organic Traditions, which got its start after its owner took some digestive enzymes that cured his stomach problems, also offers superfoods. They carry products with a low glycemic index that are high in antioxidants, offering fruits, seeds, sprouts, teas, and blends from all over the world. Yacon, a sweetener in some of its products, is made from a tuber from the Amazon jungle that doesn’t spike one’s blood-sugar level like agave and is much tastier than Stevia, says Hindy Stegman, the owner’s sister and vice president of sales and marketing.

According to Stegman, Organic Traditions is focused on raising awareness of healthy eating in the Jewish community.

“We are supposed to be a light unto the nations, but it seems our light is not so bright,” she says, pointing to hot dogs, cakes, and other unhealthy options offered by Kosherfest exhibitors. “We are here to let people know other choices are available to them.”