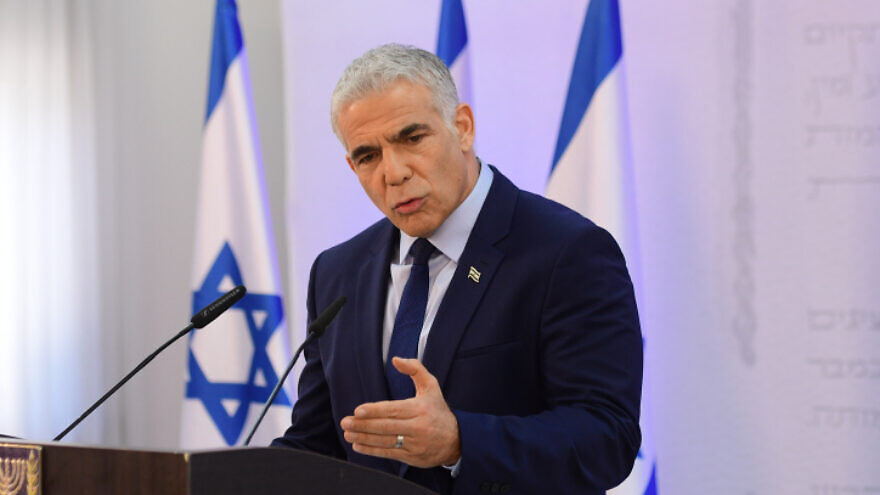 (May 2, 2022 / JNS) Israel’s prime minister and foreign minister on Monday strongly condemned his Russian counterpart’s statement made the day before that Nazi leader Adolf Hitler “had Jewish blood.”

Speaking to Italian news channel Zona Bianca, Russian Foreign Minister Sergey Lavrov had attempted to defend Russia’s portrayal of Ukraine as a Nazi state. When asked how a Nazi state could be headed by a Jewish president such as Volodymyr Zelensky, he responded, “So what if Zelensky is Jewish. Hitler had Jewish blood.” The Russian foreign minister also claimed that “the greatest anti-Semites were Jews.”

“I view with utmost severity the Russian Foreign Minister’s statement,” said Israeli Prime Minister Naftali Bennett in a statement on Monday. “His words are untrue and their intentions are wrong.”

“The goal of such lies is to accuse the Jews themselves of the most awful crimes in history, which were perpetrated against them, and thereby absolve Israel’s enemies of responsibility,” said Bennett.

No other war in the modern era was comparable to the Holocaust, he said, adding that “the use of the Holocaust of the Jewish people as a political tool must cease immediately.”

Israeli Foreign Minister Yair Lapid tweeted in response to Lavrov’s statement that “This is an unforgivable, scandalous statement, and a terrible historical error. We expect an apology. The Russian ambassador will be invited to a conversation that will not be simple.”

Russia’s ambassador to Israel Anatoly Viktorov will be told that Russia has to “fix this mistake and open a history book,” said Lapid, according to Ynet. “This angers me not just as foreign minister but also as the son of a father who was in the Budapest Ghetto. Jews didn’t put him in the ghetto. Nazis put him there. The Nazis persecuted the Jews and killed six million Jews. The Ukrainians are not Nazis. Only Nazis were Nazis. Only they dealt with the systematic destruction of the Jewish people.”

Asked if Israel has been too soft with Russia over its war against Ukraine, Lapid rejected the criticism, saying that “Israel, from the first moment, said it condemns the invasion.”

Israel, he noted, had also voted in the United Nations to suspend Russia from the Human Rights Council.

“We have been very precise. Israel is the only country that possessed a field hospital in Ukraine. We have invested a lot in humanitarian assistance. It is true that we have national security considerations. No state lacks these considerations,” he added.

Yad Vashem also released a statement on Monday condemning Lavrov’s remarks, accusing him of “propagating the inversion of the Holocaust.”

“The remarks of Russian Foreign Minister Sergey Lavrov, as quoted, are absurd, delusional, dangerous and deserving of condemnation,” said the statement.

Lavrov is “turning the victims into the criminals on the basis of promoting a completely unfounded claim that Hitler was of Jewish descent,” it continued.

Concluded the statement: “Equally serious is calling the Ukrainians in general, and President Zelensky in particular, Nazis. This, among other things, is a complete distortion of the history and an affront to the victims of Nazism.”