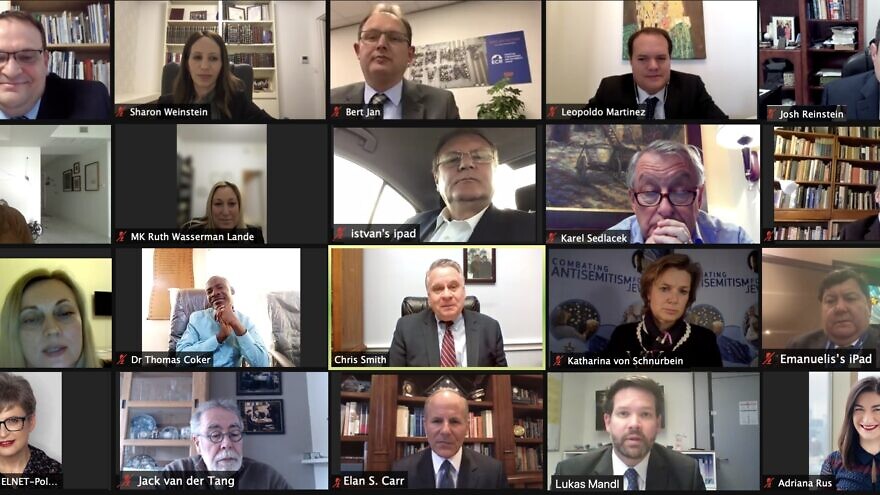 (January 27, 2022 / JNS) Legislators worlwide took part in an online conference on Thursday on the adoption and implementation of the International Holocaust Remembrance Alliance’s (IHRA) working definition of anti-Semitism. Each of the participants serves as chairperson of their government’s Israel Allies Caucus and has a faith-based connection with Israel.

The event was co-sponsored by the Israel Allies Foundation (IAF), the European Christian Political Movement and the Combat Antisemitism Movement. It was hosted by European Parliament member Bert-Jan Ruissen and Finnish Parliament member Peter Ostman.

The IAF promotes communication between parliamentarians and legislators around the world who share a belief that the State of Israel has the right to exist in peace within secure borders. It mobilizes political support for Israel based on shared Judeo-Christian values.

“As legislators, we have a responsibility to fight anti-Semitism with all the tools available to us,” said U.S. Congressional Israel Allies Caucus co-chair Chris Smith (R-N.J.). “This means we have to write good legislation, provide funding for programs to fight anti-Semitism, hold hearings, pass resolutions, meet with executive branch officials and work together with parliamentary colleagues in Israel Allies caucuses.”

Twenty-four countries in the European Union have adopted the IHRA definition, something which Minister of Diaspora Affairs Nachman Shai said “set the groundwork for its new strategic plan to combat anti-Semitism and foster Jewish life in Europe” during the Jan.27 meeting.

The E.U.’s decision was addressed by Katharina von Schnurbein, who was the first person to be appointed as the European Commission Coordinator on combating anti-Semitism and fostering Jewish life.

“You can’t fight it if you can’t define it,” she said. “The E.U. Commission takes a victim-based approach and regards all forms of anti-Semitism as equally pernicious. The non-legally binding working definition of the IHRA on anti-Semitism reflects what the majority of European Jews regards as anti-Semitic. Since 2017, the commission has been using this definition as a useful guidance tool to recognize anti-Semitic biases and recommends it to its member states.”

There are currently no African countries that have adopted the definition. On Thursday, Joyce Chitsulo, chair of the Malawi Parliamentary Israel Allies, said that she expects Malawi to lead the charge in her region.

“It is time for African countries to join the global movement supporting the IHRA definition of anti-Semitism,” said Chitsulo. “My goal is for Malawi to be the first African country to adopt the definition.”

Knesset member Ruth Wasserman Lande, a member of the Knesset Christian Allies Caucus, also attended the online event. She noted that the IHRA definition protects not only the Jewish people but serves “as a model for defining racism against other religious or racial minorities.”