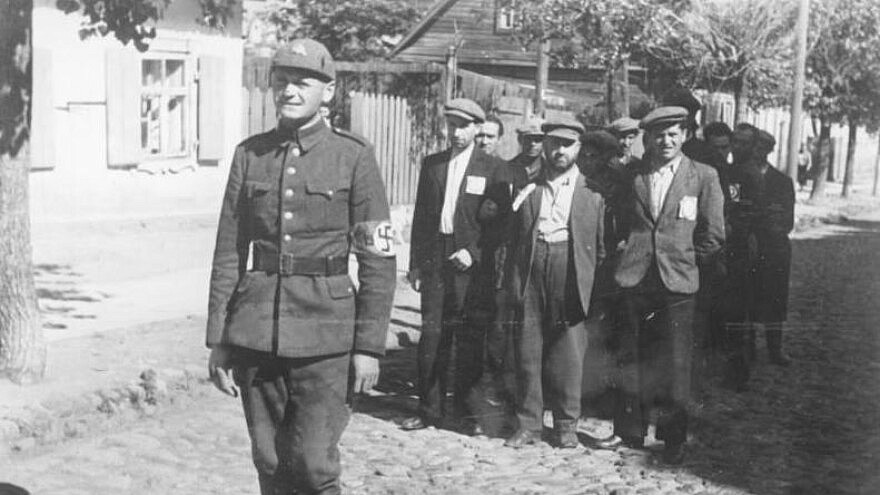 (October 2, 2022 / JNS) A crowd of students, teachers and principals stood in Vilnius’s historic Ghetto Victims (Rūdninkai) Square last week as they listened to the speeches and watched the performances of their classmates. Lithuanian politicians, representatives of various institutions and of the Lithuanian Jewish community, and foreign diplomats were also in attendance.

Each year on Sept. 23, the day in 1943 the Nazis began to liquidate the Vilnius Ghetto, Lithuania marks the genocide of its entire Jewish community in cities and towns throughout the country. Fewer than 25,000 Lithuanian Jews survived from a prewar total of approximately 250,000.

In Vilnius, the “Jerusalem of Lithuania” as it was once affectionately called, most of the 41,000 Jewish inhabitants were murdered by the Germans and their helpers.

The group gathered to retrace the final steps of Vilnius’s Jews 81 years ago, by marching from Rūdninkai Square to the city’s railway station, where they took a train to the Ponary Forest a few miles to the south. From the Ponary railway station, the participants walked to the memorial site situated in the forest, where they partook in the official event to mark the genocide of Lithuania’s Jews.

Unlike in most of Europe, most of the Holocaust victims in Lithuania were killed near where they lived. From the summer of 1941 through the winter of 1943, Lithuania’s Jewish communities were destroyed. Today, there are more than 200 massacre sites of Holocaust victims throughout the country.

This year, approximately 200 institutions joined the unique initiative “The Road of Memory,” launched 12 years ago by the International Commission for the Evaluation of the Crimes of the Nazi and Soviet Occupation Regimes in Lithuania. The biggest commemoration event of “The Road of Memory” takes place in Vilnius and the Ponary Forest, where the largest Lithuanian Jewish community was taken to be shot. Each “Road of Memory” event throughout Lithuania takes place on the date related to the extermination of that area’s Jewish population 81 years ago. On Sept. 23, 1943, Gestapo functionary Bruno Kittel announced his order for the final liquidation of the Vilnius Ghetto and the last group of the city’s Jews was sent to their deaths in Ponary.

Kittel disappeared after the war.

The International Commission seeks to raise awareness in Lithuanian society that the Holocaust is not only a Jewish tragedy but also a major loss to Lithuania as a whole since the murder of its Jewish population resulted in the loss of intellectual, cultural, political, and economic potential for the country. 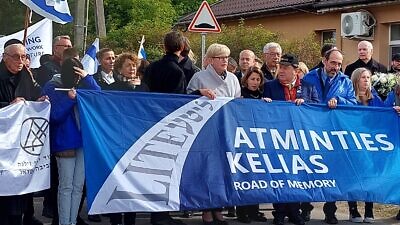 Speaking to the participants gathered in Rūdninkai Square, European director of the March of the Living Michel Gourary thanked Lithuania’s Prime Minister Ingrida Simonyte for her participation in numerous commemoration marches, for her political courage and for her willingness to stand up for and promote Holocaust remembrance and education.

“Under your leadership, we have a fantastic partner….Thank you for your support,” he said.

Gourary explained that the March of the Living organization organizes an annual march between Auschwitz and Birkenau as well as in several cities throughout Europe. The organization’s mission, he said, “is to educate the next generation of the importance of remembering the Holocaust, the lessons of the Holocaust, and of the need to act in the present and to build a better future.”

Since its inception in 1988, the International March of the Living has become one of the world’s most prominent organizations involved in Holocaust education and in the fight against anti-Semitism, hatred and racism. March of the Living holds educational activities throughout the year, marching across Europe in some areas where Jews lived and died during the Holocaust including in Poland, Germany, Austria, Hungary, France, Latvia, Lithuania, Greece and Romania. More than 500,000 people, most of them students, accompanied by Holocaust survivors, have attended these marches in the past 35 years.

According to Gourary, “The message of the International March of the Living is a universal one: Get to the root of hate, prejudices and intolerance, and eradicate it. Speak out against racism, anti-Semitism, and violence wherever they may occur.”

Gourary added that the organization conducts marches in countries where the Nazis acted to eradicate the Jewish communities as part of the Final Solution. Lithuania, a center of Jewish culture, was home to affluent Jews.

“Unfortunately,” he said, “Ponary is among the main symbols of the Holocaust by bullets. The International March of the Living marches at all sites at which Jews were massacred, to carry the memory of the past and declare aloud, ‘Never [again] means never.’”

At the ceremony in the forest, Simonyte, said, “Today, as every year, we gather in the pine forest of Ponary to remember the greatest tragedy of the 20th century. It is a site where we are inevitably overwhelmed by pain and infinite sorrow as we enter. Ponary is a painful echo of the name of death. We can only imagine how painful it is for the survivors of the Holocaust, for the relatives of those who were murdered in Ponary, to come here.

“We can only dream of how we would be living today, of what Lithuania would have been like if it had not been for the brutal hatred that blinded people so much that the lives of innocent people no longer meant anything,” the prime minister said. “The Shoah destroyed everything without mercy—people, their dreams, their talents, their relationships—and all this under the pretext of conspiracy theories, ridiculous fabrications, and fear of otherness. Not only our state, our nation, but also the destinies of our people have fallen to pieces. Almost the entire ‘Jerusalem of Lithuania’ has been destroyed here.”

Ronaldas Račinskas, executive director of the International Commission, said that his organization’s participation and activism stem from the understanding that “together with the destroyed Jewish communities, Lithuanian society has lost a unique intellectual, cultural, political and economic potential; the potential of our Jewish fellow citizens and neighbors, who for centuries together have been building the prosperity of the Lithuanian state.”