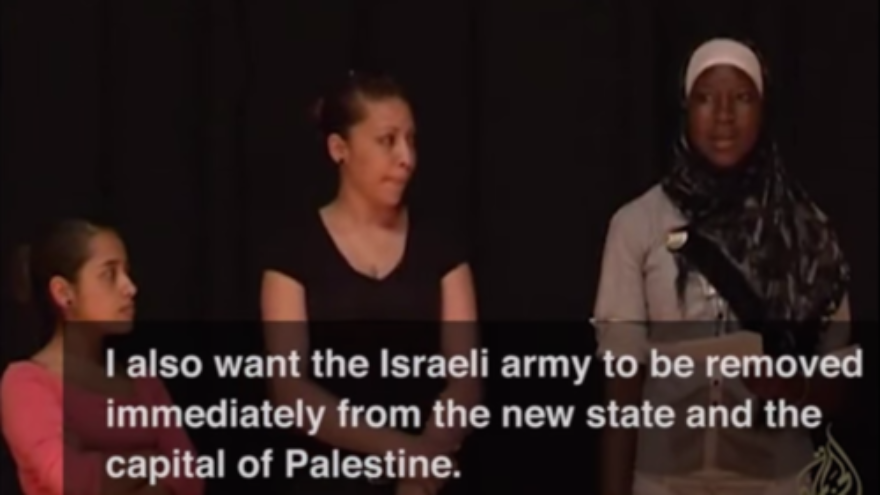 Click photo to download. Caption: During a role play exercise, a participant of Axis of Hope's "Whose Jerusalem?" workshop expresses the desire for the Israeli army "to be removed immediately from the new [Palestinian] state and the capital of Palestine." Credit: YouTube.
Republish this article
1443 WORDS
Spread the word.
Help JNS grow!
Share now:

(May 20, 2015 / JNS) Mainstream Jewish organizations—including the Anti-Defamation League (ADL), the women’s Zionist organization Hadassah, and a local Jewish Federation—are raising concerns about a Boston University-affiliated high school workshop over what they consider to be its anti-Israel bias and questionable pedagogical techniques.

In April, Jewish communal attention was initially drawn to the issue when the advocacy group Americans for Peace and Tolerance (APT) released a video on Axis of Hope’s (AOH) “Whose Jerusalem?” workshop, which specifically selects Jewish students to act as members of the Palestinian terror group Hamas during mock negotiations. In the aftermath of the video’s release, other pro-Israel organizations are joining APT’s public criticism of AOH. At the same time, New England-based Jewish groups that have previously been divided on matters including anti-Israel textsin the Boston suburb of Newton’s public schools and anti-Semitism at Northeastern University are presenting a united front on the AOH issue.

AOH claims its mission is “developing in young adults an understanding of alternative, non-violent approaches to resolving complex conflicts locally, nationally and internationally.” But Carl Hobert, AOH’s founder, has admitted to receiving guidance for the “Whose Jerusalem?” workshop from anti-Israel professors Noam Chomsky (Massachusetts Institute of Technology) and Denis Sullivan (Northeastern University). Hobert has told Al Jazeera that one of the workshop’s goals is “putting pressure on our government to create a Palestinian state.”

While AOH has worked in at least 28 high schools across the U.S.—which are listed on its website at http://www.axisofhope.org/index.php/testimonials/clients—the 27-minute film by Boston-based APT, titled “Axis of Bias @ Weston High School,” focuses on AOH’s presence at Weston High School because APT was contacted by a concerned individual in that area.

“Under the banner of global education, and peace studies, and conflict resolution, and activist diplomacy, all kinds of things are being brought into the schools that are anti-Israel,” APT President Charles Jacobs said. “[Axis of Hope] is one of the more egregious examples, and we’ve got it on film. We’ve shown this film around to people who are experts in education, and also to Jewish leaders in the city, and they’re absolutely appalled.”

Among the Jewish leaders who have viewed the APT film is Barry Shrage, president of Combined Jewish Philanthropies (the Boston area’s Jewish Federation), who said he also watched a previous segment on AOH by Al Jazeera.

“[AOH is] not the kind of thing that you want to have happen in your school in an unvarnished way, without any opportunity for rebuttal,” Shrage told JNS.org. “It’s just enormously biased. It pretends to be all about helping people, helping kids understand a variety of international perspectives, but really it’s just one perspective. It’s something that I think parents and schools need to be aware of before they invite this guy (Hobert) in.”

“[Hamas is] an organization committed to Israel’s destruction in its charter, and it’s an organization with a deep history of murdering Jews and Americans. It’s very concerning, when as a way to teach conflict resolution, we’re having kids role-play this particular organization,” Trestan told JNS.org.

Both AOH’s website and Boston University (BU) officials say that AOH is now inactive, and that Hobert currently directs a new global literacy program within BU’s School of Education.

“We recognize there are questions about the objectivity of the [AOH] workshop’s content and the way it is presented, based on the YouTube ‘Axis of Bias’ video,” Colin Riley, BU’s executive director of media relations, told JNS.org. Riley said the new Hobert-led program “has changed significantly from what is shown in the video” and “offers certificate-granting institutes for secondary school teachers to learn to teach conflict resolutions skills to their students.”

“The program is based on a fundamental understanding that conflicts emanate from mutual misunderstanding and that opposing parties are morally equivalent, although we recognize that many scholars may challenge these premises,” Riley said.

An email obtained by JNS.org that was signed by BU President Robert A. Brown, and addressed to a concerned alumnus who asked to remain anonymous, also stressed the principle of moral equivalence—seemingly in defense of AOH’s moral equivalence regarding Israel and Hamas.

“I need to reiterate that the workshop as currently taught has evolved significantly from what was shown in the [‘Axis of Bias’] video,” Brown wrote. “What has not changed is the underlying premise of this particular program, which is that conflict arises from mutual misunderstanding. And, at least implicitly, there is the premise that all parties to a conflict (nation-states or territorial entities) are morally equivalent.”

In a section of its curriculum titled “The Palestinian Intifada and the Peace Process, 1987-1997,” the workshop omits any mention of the rampant Hamas suicide bombings against Israelis and blames Israel for initiating the Palestinians’ violence.

“As Israeli policy hardened against the Palestinians in the occupied territories, the Palestinians began a series of riots and attacks on Israeli soldiers and civilians,” the curriculum states.

According to the curriculum, the “repressive measures” Israel took in response to the intifada  “turned world opinion against Israel.”

“Weston High School history teachers facilitated the small group discussions during the workshop and provided opportunities for students to reflect upon the materials and activities in the days before and after,” Maloney said. “None of our students were forced into particular roles during the simulation. As one teacher noted, she valued the workshop for ‘opening and deepening the students’ understanding of the Israeli-Palestinian conflict.”

Trestan told JNS.org that ADL expressed its concerns about the workshop upon meeting with Maloney and Weston High School Principal Anthony Parker. ADL also spoke to parents whose children participated in the workshop.

“There’s no indication of any hidden agenda by the Weston schools,” Trestan said.

“I think they looked at this program, and on its face it looked like a good program,” he said. “We expressed our concerns about it, and they were very receptive. As far as we know, there are no plans for this program to return to Weston.”

Hobert defended his workshop in an interview with BU’s student newspaper, The Daily Free Press, saying, “I founded Axis of Hope as a non-profit because I wanted to teach students two main concepts: conflict resolution and negotiations. So to [claim I] have a ‘political agenda’ is definitely off-key. The whole idea here is to have students, whose walls are already down in their own schools… look at the issues and decide.” Hobert did not immediately respond to a request for comment from JNS.org.

APT’s Jacobs explained that while Jewish organizations are finally taking action on the threat of anti-Zionism on college campuses, the new film shows how “the poison that we now know is on the campuses” is also spreading on the high school level. Programs like AOH are “grooming these kids” in a way that by the time they reach college, “they’re already coming pre-heated against Israel,” Jacobs said.

Trestan said that the Jewish community “needs to be aware of programs in public schools, in independent schools, that in their good-faith attempt to introduce the Middle East conflict to their students don’t take into account all aspects and some of the sensitivities.”

“For a Jewish student to be placed in the role of having to articulate the position of Hamas, which is an organization dedicated to killing Jews, I’m not sure that exercise fulfills the pedagogic goal of the program,” said Trestan. “We need to be vigilant to make sure that when we teach kids about conflict resolution and the Middle East in particular, we need to look at every aspect of it and also be sensitive to how the kids are going to do [workshops].”