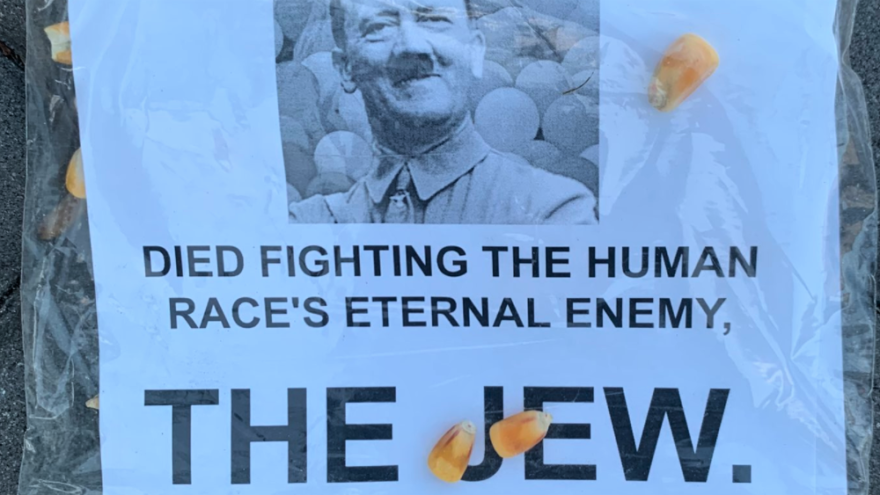 (April 20, 2022 / JNS) Police are investigating after anti-Semitic fliers with a photo of Adolf Hitler on them were left outside homes on Wednesday morning in Boca Raton, Fla.

On the fliers, which were placed in plastic bags and filed with corn nibs, Hitler’s image was followed by the words, “Died fighting the human race’s eternal enemy, the Jew.”

The came on the birthday of the leader of Nazi Germany.

Boca Raton Mayor Scott Singer tweeted: “Angry that this AM a cowardly hatemonger left anti-Semitic and pro-Hitler flyers in driveways at homes on four streets in our city. We fully condemn this vile hate. Boca PD investigating. Unusual here; unacceptable anywhere. We stand strong and united against all bigotry and anti-Semitism.”

Rep. Ted Deutch (D-Fla.) also posted on social media about the incident, writing “these were ‘delivered’ to homes in Boca Raton, Fla.” on the fifth day of Passover. “Hitler attempted to eradicate the Jews from the earth. His Nazis slaughtered 6 million Jews.”

“This vile anti-Semitism must be universally condemned,” he continued. “And the cowards spreading this hate must be held accountable.”