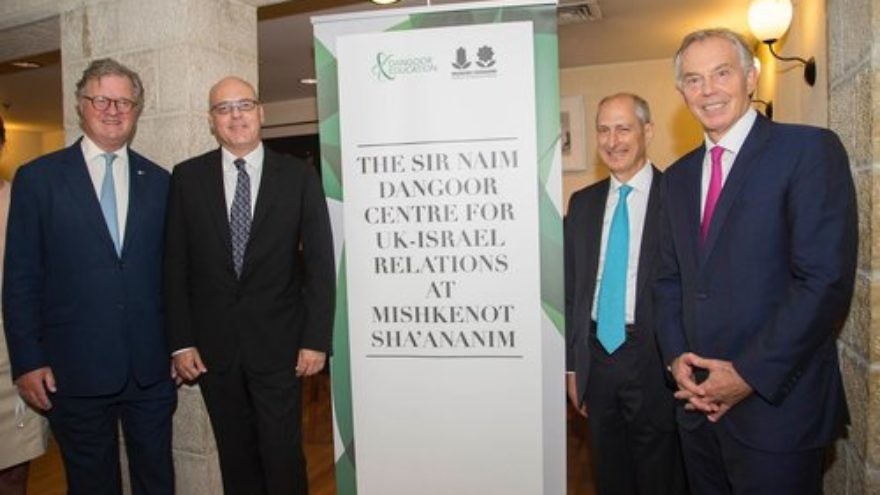 In anticipation of the 100th anniversary of the Balfour Declaration, British and Israeli senior officials convened in Jerusalem this week to discuss the past, present, and future of British-Israeli relations.

The Balfour Declaration was a British government public statement, issued Nov. 2, 1917, that offered support for the establishment of a “national home” in Palestine for the Jewish people. The declaration is credited with galvanizing popular support for Zionism.

During the conference, dubbed “From Balfour to Brexit” and held Sept. 13 and 14 to inaugurate the new Jerusalem-based Sir Naim Dangoor Centre for UK-Israel Relations, Lord Roderick Balfour, the 5th Earl of Balfour – and great-great nephew of former Foreign Secretary Lord Arthur Balfour – reminisced fondly about the “family folklore” of his ancestor’s “very important letter.”

Speakers at the conference, among them former British Prime Minister Tony Blair, Israeli Ambassador to Britain Mark Regev, Israeli Foreign Minister Tzipi Livni, and Natan Sharansky, chairman of the Jewish Agency for Israel, focused on the history and future of British-Israeli relations. They also discussed the possible political and historical implications of Britain’s upcoming exit from the European Union as mandated by last year’s so-called Brexit vote.

Jonathan Freedland, columnist for The Guardian and presenter of BBC Radio 4’s contemporary history series “The Long View,” spoke of the legacy of the Balfour Declaration from a British-Jewish perspective. He maintained it is “mostly talked about by people who would seek to criticize or doubt Israel’s right to exist, because there are people who wish to cast Israel as an imperialist project.”

Freedland suggested Britain’s Jewish community likely would adopt a muted approach to the declaration’s 100th anniversary. British Jews, he said, “would rather talk about the U.N. vote of 1947 because U.N. votes give a legitimacy that stands in today’s perspective compared to a British decision with origins of an imperial whim of Sir Mark Sykes.”

He was referring to the Sykes-Picot treaty that divided up much of the former Ottoman Empire’s Middle East holdings into modern states. “The idea of imperialist Britain and France sitting with a pen and a map – this is not the history of national liberation Jews would like to invoke,” Freedland added.

In the declaration, the British government promised to use its “best endeavours” to facilitate the creation of a national home for the Jewish people in Palestine, with the stipulation “that nothing shall be done which may prejudice the civil and religious rights of existing non-Jewish communities in Palestine, or the rights and political status enjoyed by Jews in any other country.”

Recently, Palestinians attempted to persuade the British government to disavow the Balfour Declaration, claiming Britain had not upheld its promise to safeguard the civil rights of Arabs in the disputed territories. The Balfour Apology Campaign, which has garnered more than 13,000 signatures, seeks an official apology from Britain for its “colonial history” against the Palestinian people. Palestinian Authority Foreign Minister Riyad al-Maliki has called on British Foreign Secretary Boris Johnson to issue a “Johnson Declaration,” akin to the Balfour Declaration, recognizing a Palestinian state.

The British Foreign Office has said it does not intend to apologize for the Balfour Declaration, calling it “a historic statement” and adding, “we are proud of our role in creating the state of Israel. The task is now to encourage moves towards peace.”

Asked at the conference what he thought his great-great uncle would say about Israel if he were here today, Lord Roderick Balfour responded, “I would guess that most of the members of government of the day would say that it was a very good thing that they backed the idea of a home for the Jews because there are six million Jews [in Israel].”