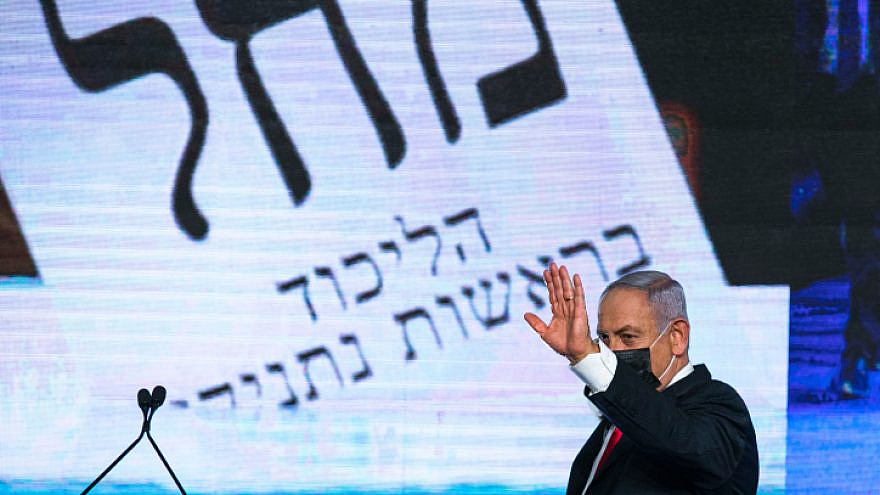 (March 25, 2021 / JNS) Israeli Prime Minister Benjamin Netanyahu and his opponents have no clear path towards a Knesset majority, Israeli election results show, indicating that the country’s political gridlock will continue.

The results of Tuesday’s election confirm that Netanyahu’s Likud Party won the most seats, 30, but his bloc of right-wing, religious supporters only have 52 seats, while the parties opposed to the Israeli leader had 57 between them.

While the right-wing Yamina Party (seven seats) and the Islamist Ra’am Party (four seats) have not committed to either side, it remains highly unlikely, despite recent rumors, that any right-wing party would sit in a government with an anti-Zionist Islamist party such as the Arab Ra’am.

If Yamina—the party of former defense minister Naftali Bennett—did join with Netanyahu’s bloc, the combined two would still fall two seats short of the 61 mandates needed to form a governing coalition. If Gideon Sa’ar’s right-wing New Hope Party also joined, then there would be enough for Netanyahu to form a coalition. However, Sa’ar, who quit Likud, has explicitly ruled out sitting in a Netanyahu-led government.

“It is clear that Netanyahu doesn’t have a majority for a coalition headed by him,” Sa’ar said in a statement. “Now we must work to fulfill the potential for forming a government of change. As I announced on election night, ego won’t be a factor.”

Indeed, Opposition Leader Yair Lapid, who heads Yesh Atid—the second-largest party set to enter the Knesset—has been discussing with other anti-Netanyahu parties the possibility of forming some type of coalition to pass legislation to block Netanyahu from forming a government. Still, it’s unclear how they could gain such a majority without cooperation from the Arab parties.

Notwithstanding a major political development, it appears that Israel will head to an unprecedented fifth round of elections this summer.

“This round of elections was among the most challenging that the State of Israel has known,” said Orly Adas, head of the Central Elections Committee. “Beyond the fact that this is the fourth election in the past two-and-a-half years, we experienced an enormous challenge in light of the coronavirus pandemic.”